Descendants of prominent Indigenous artist William Barak fear they will lose two rare artworks when they go under the hammer in New York on Wednesday.

Auction house Sotheby's will auction off a 19th-century painting and a decorative shield. Both have been kept in the same Swiss family since their creation.

The Wurundjeri Woi-Wurrung Cultural Heritage Corporation has set up a crowdfunding page to buy the artworks, and is in an 11th-hour push to secure the money.

Uncle Ron Jones, an elder and a descendant of the artist, said the artworks belonged back on country.

"I'm quite sure that if William Barak was here today he would be totally unhappy that people are making money out of it," he said.

Bid to bring the artworks home

The artworks' existence and their sale were only recently discovered by the Wurundjeri people.

They believe the pieces were likely gifted in 1897 to Jules de Pury, a nephew of Baron Frédéric Guillaume de Pury, who had a strong friendship with William Barak and grew vineyards on Kulin Country.

What makes these recently discovered pieces particularly unique is that they stayed in the de Pury family for about 125 years, according to La Trobe University historian Nikita Vanderbyl.

"The connection between Barak and the de Pury family make this provenance information so watertight and it's such a strong narrative that it is very different from previous examples that have come up at auction," Dr Vanderbyl said.

"If they've got a conscience, they should be handing it back to the traditional bloodlines of that family group," Wurundjeri Corporation treasurer Ron Jones said.

The elders crowdsourced to save another artwork in 2016, but the bids for the piece, titled Ceremony, far exceeded what they thought was needed, creating heartbreak for the community.

They hope that does not happen again.

The artist and leader

Mr Jones grew up hearing the stories of the late artist from his grandmother and mother — Barak's grandniece.

"He was very short in size but big in stature," Mr Jones explained.

Barak was influential in the establishment of an Aboriginal farming community known as Coranderrk, in the colony of Victoria.

Mr Jones's grandmother recalled how Barak made their community self-sufficient with food, and arranged a cow for fresh milk.

Barak watched his father and uncles negotiate with the white settlers. And he witnessed the signing of John Batman's "treaty" for the land that became the cities of Melbourne and Geelong.

Mr Jones heard "how he was so respected" even among European colonisers.

Ngurungaeta (headman) Barak painted his traditions and ceremonies as a way of preserving his culture at a time when ceremonies were banned.

Dr Vanderbyl completed a PhD on the artist and was asked to write the descriptors for Sotheby's auction.

"This is a moment when Aboriginal people were accommodating, or adjusting, or fighting colonisation — all of these things were happening at once," Dr Vanderbyl explained.

"They came into the colonial world but they brought people like the de Pury family into their world."

There are 52 known Barak paintings and drawings, and Mr Jones explained: "They tell a complete story."

"We never had a written language," he said.

"Remember all our language was done by oral [communication], so that would be a way of telling people — storytelling by painting."

"That fundraiser is to bring something back home that belongs to our history here, not just for the Wurundjeri people but for education so that everyone can enjoy it."

Dr Vanderbyl agreed the artworks should be back on country.

"These are regarded by the Wurundjeri as their national treasures," she said.

In 2015 an exhibition called Oil Paint and Ochre combined archives from the Australian part of the de Pury family, which had donated its artworks to the Yarra Ranges Regional Museum at Lilydale.

The Wurundjeri have not been in contact with the Swiss part of the de Pury family.

Mr Jones told The Drum he felt "let down" by all levels of government.

"If they are talking about Treaty and bringing us all together, let the government show a bit of faith … let's bring it back home."

The Wurundjeri Corporation asked for a meeting with Victoria's Aboriginal Affairs Minister, Gabrielle Williams, but was not successful.

A Victorian government spokesperson said it acknowledged the artworks were invaluable to the Wurundjeri people, but the responsibility for the protection and repatriation of significant cultural objects from overseas lay with the Commonwealth.

However, the entirety of the new federal government will not be sworn in until next week.

For these works, it will be too late. 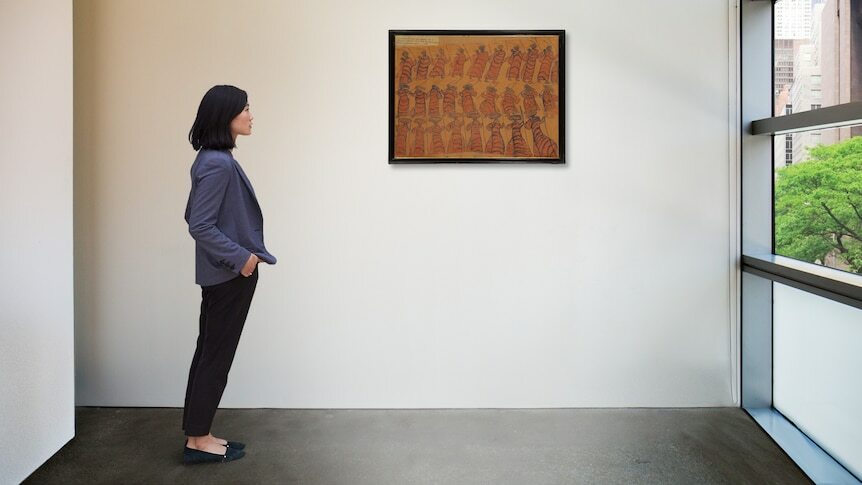 Descendants of William Barak buy two of his works at New York auction
The Wurundjeri Woi-Wurrung Cultural Heritage Corporation used crowdfunding, and a donation from the Victorian government, to buy the works at…

ABC News
One subscription that gives you access to news from hundreds of sites
Rare Aboriginal art to return to Australia after Victorian government chips in $500,000 at last minute