South Korean Leader Said Coronavirus Would ‘Disappear.’ It Was a Costly Error.

SEOUL, South Korea — There were 28 cases of the coronavirus in South Korea on Feb. 13. Four days had passed without a new confirmed infection. President Moon Jae-in predicted that the outbreak would “disappear before long,” while the prime minister assured people that it was OK not to wear surgical masks outdoors.

As it turns out, the virus had been rapidly spreading at the time through a large, ​secretive ​church in Daegu, where it has since mushroomed into the largest epidemic of the coronavirus outside China, with 2,022 cases, including 13 deaths.

Now the president is facing a political backlash over his response as the number of cases continues to climb — 505 new infections on Thursday alone.​

Opposition politicians are seizing on what they call ​Moon’s​ ​mishandling of the crisis, by not moving quickly to close the country’s borders to China and not supplying enough surgical masks for citizens. The virus is also intensifying existing pressure from the weak economy, which is being made worse by a sharp decline in trade with China, South Korea’s biggest trading partner.

The opposition is vowing to make Moon’s “incompetence” the top election issue ​for the April 15 parliamentary polls. And more than 1 million South Koreans signed an online petition calling for his impeachment.

“If the outbreak doesn’t let up soon, it could spell a disaster for the ruling camp in the coming elections,” said Ahn Byong-jin, an expert on presidential leadership at Kyung Hee University in Seoul. ​“The current political leadership remains woefully behind in what to do, how to do it and how to communicate with the people at a time of pandemic like this.”

The choices are complicated for South Korea. The virus sprang from China. But much of South Korea’s economy depends on China.

Moon’s government has been reluctant to close the doors on visitors from mainland China even as 40 countries did, including the United States, and North Korea. South Korea has banned travelers only from ​the Chinese province of Hubei, where the global outbreak started.

To Moon’s government, banning travelers would not have had a “practical benefit.” To critics, not doing so may have helped the highly infectious pathogen spread, further undercutting the chances for the economic recovery the country craved.​

An editorial in the influential conservative daily Chosun Ilbo warned ​ Wednesday ​that fighting the outbreak without banning Chinese visitors was “like trying to catch mosquitoes while keeping the windows open.”

Moon’s political enemies have long accused him of being pro-Chinese​ or afraid to challenge China’s leader, Xi Jinping. ​On​ Feb. 20, when he was on the phone with Xi, ​Moon said that “China’s difficulties are our own difficulties,” according to his office.​

A spokesman for Moon, Kang Min-Seok, noted that no visitor from mainland China had tested positive since South Korea tightened its screening of Chinese arrivals on Feb. 4. He also cited the diminishing number of new Chinese cases outside Hubei.

The opposition is also lashing out at some of the government’s early decisions.

As it was later discovered, members of the Shincheonji church in Daegu,​ in the southeast of South Korea, began developing symptoms around Feb. 7-10, days before Moon said the worst was over. The worshippers continued to attend Sunday services, expectorating and spreading the virus as ​hundreds of congregants loudly sang and prayed in the tightly seated church.

At the time, the government repeatedly assured people that they did not need to cancel large gatherings.​ Lee In-young, the majority whip in the National Assembly, urged people to “return fast to normal lives.”

Even when Moon said that things had “stabilized” on Feb. 13, Jung Eun-kyeong, director of the Korea Centers for Disease Control and Prevention, warned that it was “still too early to say that the outbreak had plateaued.”

“We will be able to say so much later, only when the number of patients in China ​drops drastically and the danger of the virus entering our country from there ​has decreased,” Jung told reporters​ that same day. “We have to remain vigilant.”

The government’s optimism faded after ​a 61-year-old female church member tested positive on Feb. 18, becoming South Korea’s 31st patient. Since then, the cases have skyrocketed, sometimes doubling or tripling in a single day.

​The blowback over the crisis represents an ironic reversal for Moon.

He took power after the impeachment of his conservative predecessor, Park Geun-hye, who lost public trust by mishandling disasters, including the sinking of the ferry Sewol.

In 2015, when South Korea was hit by an outbreak of the viral Middle East respiratory syndrome, or MERS, Moon, then an opposition leader, called the crisis “a catastrophe spawned by an incompetent government” led by ​Park.

“It was the government that has turned out to be a super-spreader,” ​he said.

Once the new coronavirus took root, South Korean health officials aggressively ​tracked down ​and isolated patients​, testing over 10,000 people a day. The recent spike in the number of confirmed cases is related in part to that aggressiveness.

​But if the coronavirus appears less lethal than MERS, it has proved far more contagious. As it spread across the country, South Koreans began wondering whether they could trust Moon’s strategy, which relied essentially on the people’s cooperation and awareness.

While the government has aggressively warned people to take precautions by wearing masks and washing hands, it has tried to keep as much of the economy running as possible.

There was also a political risk in pursuing drastic measures. When the government tried to ban weekend anti-government rallies over health concerns, the participants accused it of political suppression.

As Moon’s Democratic Party announced a “maximum containment” of Daegu and nearby towns this week, many conservative politicians took that as a decision by South Korea to cordon off its own towns while being spineless toward China. The political blowback was swift, forcing the government to deny any lockdown plan. Hong Ihk-pyo, the party spokesman who announced the maximum containment, resigned.

​South Koreans’ anger spiked this week when they learned that some Chinese cities had begun quarantining South Korean visitors​ upon landing at their airports, while South Korea had not imposed such restrictions on Chinese arrivals.

An online petition to Moon’s office demanding a ban on Chinese visitors had more than 760,000 supporters.

Others in South Korea focused ​their ire on the Shincheonji church,​ which has been branded as a cult by mainstream religions​. The church’s practices​, like sitting tightly together and aggressively proselytizing, have been cited as factors in the quick spread of the illness.​ A petition asking the government​ to forcibly disband the church had more than 920,000 signatories.​ ​

“Shincheonji has no right to talk about freedom of religion,” said Rhyu Si-min, a former health minister whose YouTube commentaries are ​influential among supporters ​of Moon. “Through their acts, they have endangered the lives of many citizens.”​

Moon called for the country to join hands together, calling the coming days a “critical period” in ​determining whether the virus will continue to spread through the country. ​This week, his government said it would check all 210,000 Shincheonji members across the country ​for the virus.

Others accused the government of shifting the blame to the church, when its members were also victims of the virus.

“What we have seen so far is a total failure of our disease-prevention system​,” said Choi Dae-zip, president of the Korean Medical Association, referring to​ his group’s repeated call for an early ban on Chinese visitors.​ “The biggest reason for that failure is that the government ignored the very basic principle of disease control, which is blocking the source of infection.” 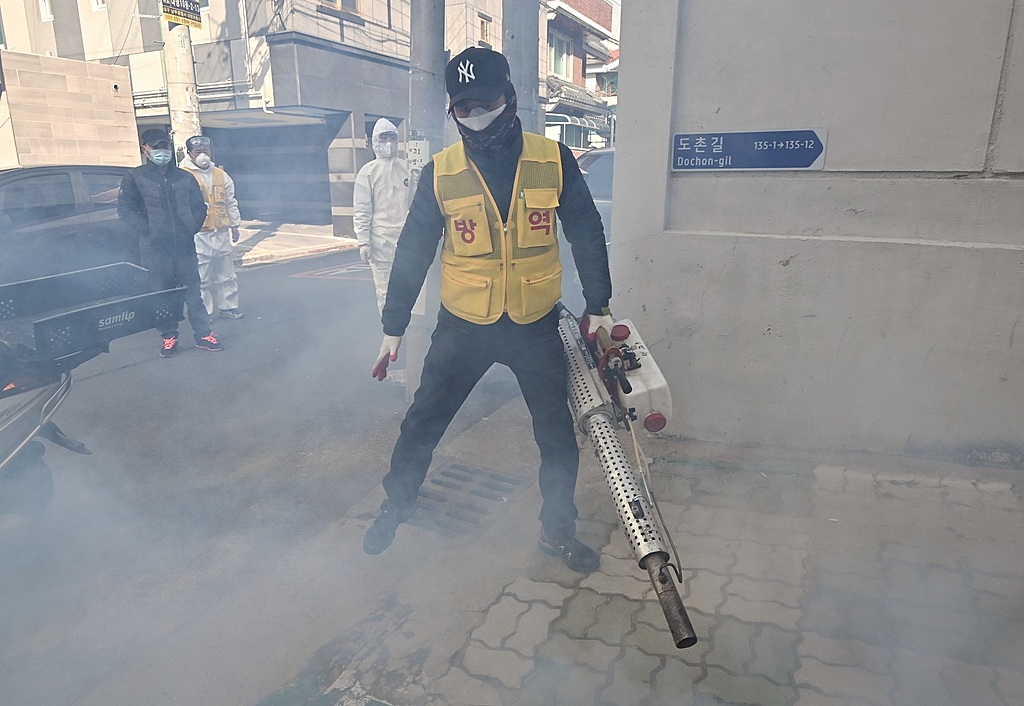 Cults and Conservatives Spread Coronavirus in South Korea
Seoul seemed to have the virus under control. But religion and politics have derailed plans.

Foreign Policy
One subscription that gives you access to news from hundreds of sites
Were you on this bus with a coronavirus patient? South Korea is on the hunt for infections
SEOUL, South Korea _ In the weeks before she was diagnosed with the novel coronavirus, South Korea's Patient No. 31…