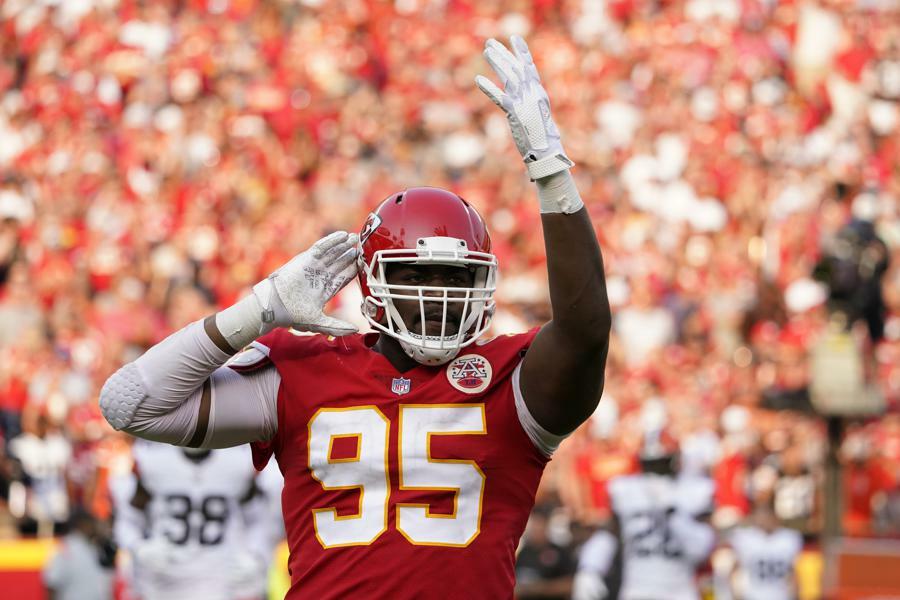 After the Kansas City Chiefs’ hard-fought, 33-29 victory against the Cleveland Browns, defensive lineman Chris Jones took off his uniform and changed into a Reggie White jersey from the Hall of Famer’s Philadelphia Eagles days.

“I model my game after Reggie White. He set the standard so high,” Jones said. “He’s probably the greatest player to ever play the game.”

Jones, who bought the jersey a few days ago, looked like the second coming of White during the Week One victory.

“I’m not sure I’ve seen a defensive lineman take over like Chris Jones did,” Chiefs head coach Andy Reid said. “He was possessed there and just an unreal job he did.”

And the Chiefs needed every bit of his performance because they faced adversity — as they often do.

They were without their defensive leader, Tyrann Mathieu, and highest-paid defensive player, Frank Clark, and trailed the Browns for more than three quarters.

Then with 10:10 left in the game, Jones lined up at his new defensive end position and beat right tackle Jack Conklin, a two-time, first-team All-Pro, to sack Baker Mayfield. That forced the run-first Browns team to get behind in down and distance.

Two plays later Browns punter Jamie Gillan dropped the punt, setting the Chiefs up on Cleveland’s 15-yard-line. The Chiefs would score three plays after that on Travis Kelce’s second touchdown pass of the game, giving them their first and only lead in the game.

Jones’ big sack helped lead to that touchdown, and that second takedown of Mayfield came one play after Patrick Mahomes threw across his body for a 75-yard touchdown to Tyreek Hill.

It was the kind of extraordinary play that Mahomes seems to make ordinary, and it shifted momentum in the game.

Mahomes remains undefeated in September and has never thrown an interception during the month. Remarkably, his touchdown:interception ratio in that month is 35:0.

Before Mahomes and Jones made those back-to-back key plays, the Chiefs’ best defensive player was already making an impact on a Chiefs defense that struggled for much of the day.

The Chiefs entered halftime trailing 22-10, and it could’ve been worse.

But Jones lined up on the interior and forced right guard Wyatt Teller to hold. Then on the very next play, he recorded a sack from his defensive end position, pushing Cleveland out of field-goal range with three seconds left in the first half.

Jones’ dominant performance is why the Chiefs rewarded him with a four-year, $80 million deal last summer.

It’s the second richest on the defense after the five-year, $104 million deal Clark signed in 2019.

This year the Chiefs signed Jarran Reed to a one-year, $5.5 million deal to help on the interior, which gave Jones the opportunity to play more at defensive end than at the defensive tackle position he’s already mastered.

Saying it’s harder for offensive lines to double-team him off the edge, Jones welcomed the move.

“It’s very exciting for me,” Jones said. “I feel like I’m learning a whole new position.”

Despite the standout performances by Jones, Mahomes, Hill and Kelce, a Cleveland, Ohio native who used to wear Bernie Kosar jerseys growing up, the Chiefs showed several areas where they need to improve.

A weakness of seasons past reared its ahead again, as they surrendered 98 rushing yards in a half and 5.9 per carry on the game. And the revamped offensive line allowed Mahomes to get hit six times.

But the outlook remains positive. They won without Mathieu, who was still dealing with the affects from Covid-19, and Clark, who was out with a hamstring injury, and both should be back soon.

“It was a big challenge,” Jones said, “especially having two of our leaders down.”