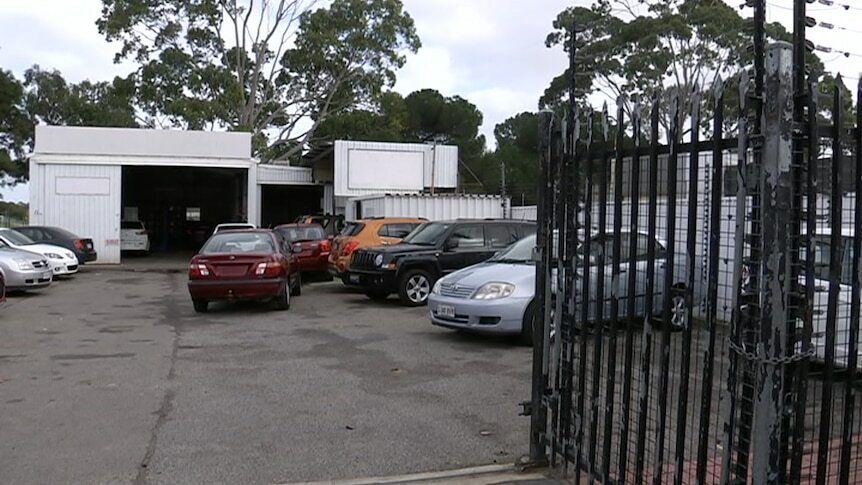 A further eight members of the Descendants outlaw motorcycle gang have been sentenced over a violent brawl at a car yard in Adelaide's north last year.

On June 2 last year, members of the gang became involved in a scuffle at the Blair Athol car yard about 4:30pm.

The Adelaide Magistrates Court previously heard the group — armed with hammers, knives, and poles — assaulted a man over a financial dispute involving a recent car sale.

The court today heard Christopher Platt, of Paralowie, had recently sold a car to the victim.

"Mr Platt … had attended the car yard to retrieve the car and some money," Magistrate Simon Smart said.

Platt was sentenced in March to seven months in prison over his role in the brawl.

"[Platt] is seen [on CCTV] to enter the car yard… and gesture," Magistrate Smart said.

"At this point… all of you became, with the exception of Mr Boin, active participants.

"You were all members of the Descendants motorcycle gang – that body is a declared organisation."

Bikies not allowed to associate

It is illegal for bikies from 10 declared groups, including the Descendants, to go out in public in groups of three or more.

Magistrate Smart said all men had been aware of an anti-association order but had shown a "contemptuous disregard" for it.

He said the violence should "raise legitimate concerns within the community".

The court heard while authorities were concerned about each defendants' ongoing association with the Descendants gang, home detention orders would be sufficient to keep the community safe while the men served their sentences.

All eight men will spend between seven and eight months in home detention.