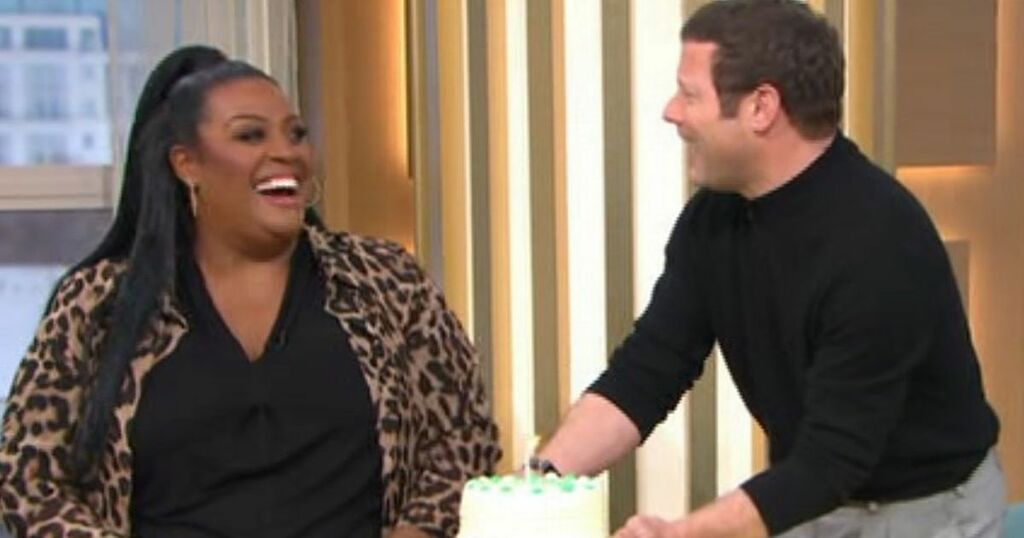 Dermot O'Leary and Alison Hammond celebrated their one year This Morning anniversary today amid jokes that they “used to hate each other”.

Dermot surprised co-host Alison with a blue icing 'Happy Anniversary’ cake at the beginning of their Friday show.

As the pair greeted viewers, Dermot stopped Alison and said: “Hang on a second. We need to live in the present. Allow me this brief moment of indulgence.

“Did you know that today is our one year anniversary?”

Dermot retrieved the cake from the kitchen counter-top and lit a single candle.

There was popped confetti in the studio as the pair blew out the candle to celebrate.

Dermot said: “Happy Anniversary. It’s been wonderful - considering we used to hate each other, isn’t it great now?”

Alison laughed with Dermot before assuring viewers the pair never really hated each other.

Dermot said: “Here’s to another ten years”, to which Alison said: “I’ll take another one”.

Alison and Dermot have been standing in for regular hosts Holly Willoughby and Phillip Schofield this week.

While fans expected Holly and Phillip would have returned to the show on Tuesday after Christmas break, their holiday was extended.

Yet an advert which aired during Wednesday’s edition of the daytime show confirmed the return of the regular hosts to This Morning on Monday.

This comes after Dermot admitted he and Alison Hammond were “surprised to be back” as hosts on Wednesday morning.

Dancing to Eminem's track Without Me, Dermot said: “We were here yesterday, why didn't they play this yesterday?”

Dermot then asked: “Are they surprised we're back?”

“Everyone's surprised!” Alison replied and Dermot said: “You're no more surprised than we are to be back!”

A number of fans welcomed the stand-in duo as Dermot announced their return beforehand through his Instagram account, writing “Back on This Morning sofa with Alison Hammond. Come join us on ITV!”

One follower commented describing them as “the best combination ever”.

Another commented: “You were absolutely brilliant today the pair of you.”

*This Morning airs weekdays at 10am on ITV