A mural-like painting of an intricately adorned kitchen shelf wraps the entrance to the National Gallery of Australia's newest exhibition.

In it, an array of household objects are celebrated with exceptional precision: a leek is propped against a blue and white ceramic vessel, black kitchen scissors protrude from a white milk jug, a sprig of lavender rests idly.

The mural is an enlarged version of Australian contemporary artist Cressida Campbell's 2009 woodblock painting The Kitchen Shelf — here, lovingly recreated by her husband Warren Macris, who is a fine art and photographic printer and took more than 100 photographs of the original to make the mural.

Opening Saturday, the exhibition is a major retrospective of Campbell's work, featuring more than 140 of her woodblock paintings and woodcut prints.

At 62, Campbell has been making art for more than 40 years, and in sales alone, she's one of Australia's most successful and sought-after artists (her commercial shows typically sell out, often before opening) — but this is the first time a retrospective of this scale has been mounted by a major Australian gallery.

It's also the first time the National Gallery of Australia (NGA) has programmed a living Australian artist for their summer 'blockbuster' exhibition — a spot usually reserved for broadly recognisable international artists (think: Picasso).

"[Campbell] is a very well-established artist and we believe that she's contributed something very unique to the cultural tapestry of Australian art," NGA director Nick Mitzevich tells ABC Arts.

"She's at the peak of her powers and we want to celebrate that."

Curated thematically across six rooms, the exhibition is autobiographical, featuring intimate domestic scenes, city- and landscapes from the places Campbell has lived, and even childhood drawings.

"It's a bit like a documentary, but in paint," the artist told ABC News.

Mitzevich says: "The exhibition reveals itself slowly to you and seduces you in because of the build-up of colour, the nuance of the way she models a form, or a shape, or a shadow, and how she captures beauty.

"For me, this exhibition is a journey of beauty."

Working from her backyard studio in Sydney (Warrang), Campbell draws inspiration from her surroundings, including her garden and household objects.

There is an unexpected beauty in the mundanity of the scenes and objects she depicts: kitchen scraps in a plastic ice cream container; nasturtium cuttings cascading from a wine glass; a shock of grey fur (Campbell's previous cat Otto) tucked behind a staircase railing.

The domesticity of her subjects is deeply intimate.

"[They're things] people wouldn't normally relate to as interesting subjects, but they actually look interesting to me," Campbell says.

"So it's a way of encouraging people to re-see things."

Campbell's creative process is highly unusual for a contemporary painter.

She first draws then etches scenes onto a block of plywood, before applying multiple layers of watercolour paint using fine sable brushes. She then mists the block with water and lays paper over the top, pressing and rolling the block by hand to create a mirror print.

There is a reverence in this approach, which draws on Ukiyo-e — a Japanese woodblock printing style that Campbell studied while living in Tokyo in the 80s.

She also cites Australian painter and printmaker Margaret Preston as a key stylistic influence. Campbell was particularly taken with Preston's woodcuts after discovering them at an Art Gallery of NSW (AGNSW) exhibition in the late 70s, while studying art at East Sydney Technical College (now the National Art School).

"I actually spend a lot of time retouching and hand-painting the print because there's often quite a lot of it that needs work," she told her sister, the actor Nell Campbell, earlier this year.

It's a painstaking process to capture what are, for the most part, everyday objects and scenes. (Piles of used paint tubes and brushes on display as part of the exhibition attest to the labour.)

But Campbell's deliberateness and astonishing attention to detail render the everyday extraordinary.

Dr Sarina Noordhuis-Fairfax, the NGA's curator of Australian prints and drawings, says Campbell, who is not particularly comfortable in the limelight, lets her work speak for itself.

"Her work finds its way out into the world without having to do any sort of banging of the drums about it.

"I think lots of people will recognise her work, but not realise who made it. And I think that's the beauty of doing a show like this: people will begin to know the name Cressida Campbell."

Noordhuis-Fairfax collaborated with Campbell on the retrospective, which includes several of the artist's childhood artworks. (Campbell has been drawing since she was six years old.)

"They're quite exceptional drawings, and you can see that real interest in the natural world and that [her] attention to detail started really young."

While Campbell may not be a household name, Mitzevich says he hopes the exhibition will help to change that.

"What I'm really heartened about is that the work and her practice will certainly take a big step in recognition through this major exhibition," he says.

"We hope that hundreds of thousands of Australians will have the opportunity to see [Campbell's] work and appreciate how unique her practice is."

The NGA has acquired a new work, Bedroom Nocturne (2022), from the exhibition, bringing the total number of Campbell's works held by the gallery to five.

Of the major Australian galleries, the Art Gallery of NSW (AGNSW) has collected nine of Campbell's works (including four donated by Olley, an early champion of the artist), while Queensland Art Gallery and Gallery of Modern Art (QAGOMA) holds one.

Major Australian galleries such as the National Gallery of Victoria, Museum of Contemporary Art and the state galleries of Western Australia and South Australia do not currently hold any of Campbell's work in their permanent collections.

Meanwhile, Mitzevich says, she is one of the most privately collected Australian artists.

The exhibition features the highest number of private loans the NGA has included in a single exhibition — 111 in total, representing 80 per cent of the works exhibited.

Having worked consistently over the past four decades, it's fitting that Campbell's retrospective has been programmed in the NGA's 40th year. (Serendipitously, she attended the NGA's opening in October 1982 as the plus-one of artist Martin Sharp.)

Her exhibition is one of 18 projects announced to date that have been commissioned as part of the NGA's Know My Name gender equity initiative, which was established in response to findings that only one-quarter of the gallery's Australian collection and one-third of its Aboriginal and Torres Strait Islander collection is by women artists.

Mitzevich says of Know My Name: "It's not about being 'woke' or politically correct. It's about acknowledging that, in our culture, the playing fields for various things are uneven … and it's important to elevate the parts that haven't been given a fair go.

"And we are unapologetic about that," Mitzevich adds.

The exhibition is not just a significant professional milestone for Campbell but a personal one too. In August 2020, she developed a life-threatening brain abscess that paralysed one side of her body and required multiple operations.

She has spoken previously about the horrible moment, in the aftermath, when she realised she might never be able to paint again.

Those operations restored Campbell's use of her right arm and leg, which in turn allowed her to complete the new work that features in the NGA exhibition.

Campbell told ABC News that being able to have a survey exhibition at NGA was an "amazing compliment".

Cressida Campbell runs until February 19, 2023 at the National Gallery of Australia. 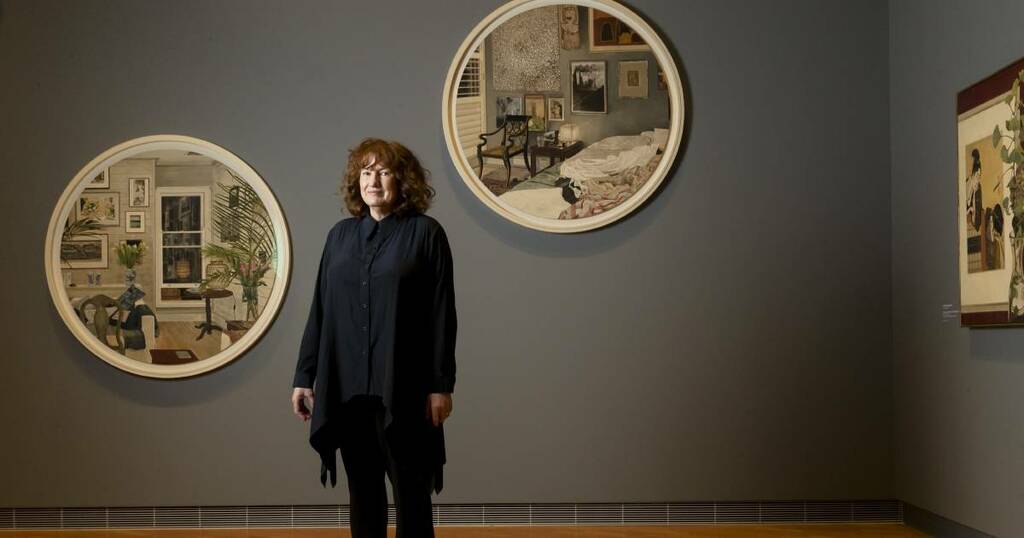 The Canberra Times
From analysis to the latest developments in health, read the most diverse news in one place.
‘A voice that isn’t spoken over’: Iraqi artists want to tell their own story

Who has been allowed to narrate Iraq’s recent history on the world stage? And where is the work of the…

The Independent UK
'Like walking into a crystal': our first preview of the Art Gallery of NSW's new Sydney Modern

In 1972, when the Art Gallery of New South Wales opened its first modern building, it was rightly praised for…

Sale of work about cancer experience estimated to raise up to £700,000 towards artists’ hub in Kent town

Museums, murals, walking tours and gardens. Philadelphia has added more to its list of touristy things to do in 2022

The Hindu
One place to find news on any topic, from hundreds of sites.
With her hummingbird mural in Lincoln Park, Cheri Lee Charlton aims to draw you in to linger

She painted the mural last year on a building at 1538 N. Clybourn Ave.