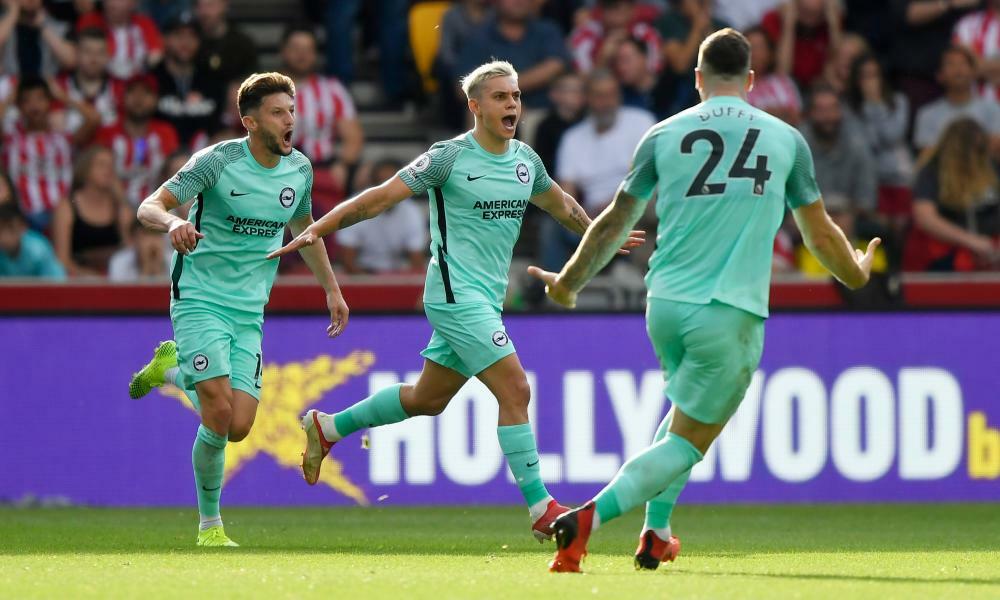 Somewhere up among the away fans was Tony Bloom, Brighton’s owner. He had forgone the chance to sit in the director’s box and encounter Matthew Benham, a former sports gambling colleague with whom he no longer wishes to associate.

The cheap seats proved a happy choice. There was bedlam in the top corner of the stadium after Leandro Trossard scored a 90th-minute winner to snatch a rather fortunate but doubtless enjoyable win.

An opening-night defeat of Arsenal fresh in the memory and a pre-match chorus of Hey Jude swelling with optimism, Brentford had been enjoying the Premier League ride but here comes reality. The Belgian’s winner, lashed from the edge of the penalty area beyond the dive of David Raya after a key pass from Alexis Mac Allister, suggests a hard season awaits.

“The game went in our favour with Leandro’s bit of brilliance,” said Graham Potter, celebrating a third win in four league matches and climbing to third in the table. Last season, it took until January for Brighton to win three. “You have to stay in the game and suffer at times.”

Brentford could have been out of sight by half-time, Bryan Mbuemo missing three chances as Brighton wobbled facing the energy of the newcomers. Ivan Toney’s tricks and flicks lit up an afternoon that will not live long in the memory, though may haunt Mbuemo.

His missed chances extended to four by full-time. Thomas Frank was supportive of a player clearly good at finding space but less adept at making use of it. “Ivan and Bryan looked really good together,” said Brentford’s manager. “Bryan’s first goal in the Premier League is surely just around the corner. We are creating chances and opportunities. I just want to create more.”

Brighton, in the Premier League for a fifth season, are a model for Benham would no doubt like to surpass. This was a close encounter but there are still significant bridges for Brentford to gap, as Frank suggested.

“Look at their players,” he said. “I don’t know how much Trossard, [Adam] Lallana and [Danny] Welbeck are on compared to ours.”

Neal Maupay, leading the Brighton line, though not too convincingly, was once Brentford’s main man until Bloom shelled out £20m on him two summers ago. In Toney, Frank and Benham may have the pleasure of a yet greater talent though Frank probably could have done with the chances falling to him rather than Mbuemo.

Early on, Toney attempted to catch out Robert Sánchez with a chip Frank compared to David Beckham’s August 1996 goal against Wimbledon. “He was close to scoring the goal of the season.”

But that was as close as Toney came. Instead, Brentford fans howled in frustration as Mbuemo struggled, all while Brighton were struggling to create many chances beyond Welbeck hitting the ball straight at Sánchez in the first half.

Frank had enjoyed the luxury of being able to start the same 10 players in Brentford’s opening four matches. That is surely unsustainable for much longer; fatigue played a significant part in letting Brighton in.

The last 15 minutes saw them push on, though not much of note was created until Trossard’s class revealed itself.

“We are giving just four shots away, that’s a top defensive performance,” said Frank., again reaching for positives following a result he admitted was ‘tough to take”.

Victory for Brighton had highlighted the difficulties that will lie ahead for him, Benham and Brentford.