'You appreciate the gravity': Barr on the outbreak moments that rocked him 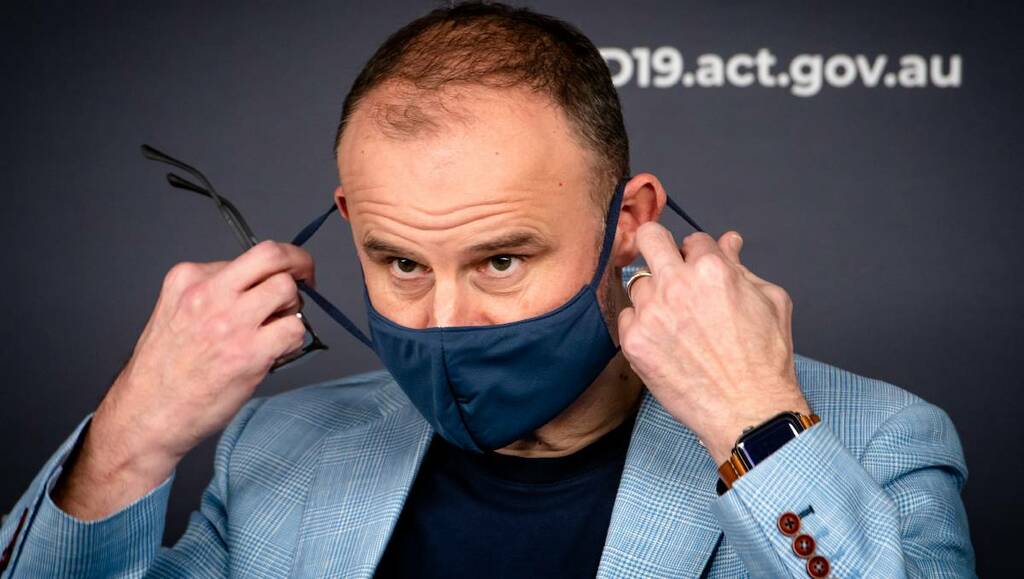 There came a moment in the early weeks of Canberra's COVID-19 outbreak that threw Chief Minister Andrew Barr.

The ACT had done plenty of work in preparation - built a surge hospital, organised a nation-leading vaccination rollout, mapped and considered how an outbreak could play out - but this news was still hard felt.

Mr Barr said it really hit home when people with COVID-19 had been admitted to intensive care and ventilated in the ACT.

"There've been a couple of moments that have absolutely rocked me. One was the first ventilated case that was really, in a serious condition in ICU. It was touch and go," Mr Barr said.

"And then when the young man with no pre-existing conditions found himself very quickly very sick. They were two moments that, you know, really genuinely - you appreciate the gravity of all of this."

In an interview with the Sunday Canberra Times to mark one month since Canberra was locked down, Mr Barr said he hoped he never had to announce a death at the daily COVID-19 press conference.

"I don't want to be in the position - this is a very strong motivating thing for me, in terms of overall managing the pandemic - that getting out and reading out a bunch of stats, including that people are seriously ill and potentially dying even, just becomes this glib, matter-of-fact thing," he said.

"You sort of get the feeling there's at least one press conference each day, where it's becoming like that. And yeah, that's - I hope I never have to announce a death from that platform."

The Chief Minister called a press conference for 12.15pm on August 12, where he announced a case of COVID-19 had been detected in the ACT and the territory would enter a seven-day lockdown from 5pm that afternoon. A record run without COVID had come to an end.

"But we really quickly worked out, not long after, it was going to be longer than seven days," Mr Barr said this week.

In the lead up to the outbreak, the territory had a unique opportunity to see outbreaks play out in other states.

Mr Barr said it was a positive the sewage detection came through first, because if it had solely been up to people coming forward for testing, the outbreak could have run another three days before lockdown. However, a positive test result came back shortly after the sewage results.

"I think that was very good preparation, to have those multiple ways of surveillance in place," he said.

The Chief Minister said building the Garran surge centre in 2020 was one of the best decisions the ACT government had made.

"It provides the surge capacity that our health system, I hope doesn't need over the Christmas period. But it's there just in case. So I think that's an excellent bit of preparatory work," he said.

"We were criticised by a lot of people at the time. You might recall the number of days it's been now since Alistair Coe declared the pandemic's over. So there's the other observation, that at no point have we thought it was."

But despite the best preparation, Mr Barr said, there were some circumstances that had forced the government to adapt.

Mr Barr said the number of people forced into quarantine - about 20,000 people or 5 per cent of the ACT population - after the outbreak reached into two of Canberra's largest schools, was larger than had been modelled.

"Standing up the testing centre capability really was the workforce not the physical, the physical elements associated with that. Although, you know, it takes 24- to 48-hours to stand up a new pop-up testing hub, but it was more the available workforce," he said.

Mr Barr credited his experience managing the ACT's response to the Black Summer fires as a help to managing the pandemic response, along with time already spent in his dual role as Chief Minister and Treasurer.

"All of those sorts of things is a reasonably good starting point to be both the public face and the sort of cabinet leader in a situation like this," he said.

However, Mr Barr, who described himself as a "policy wonk" with a mind for the maths and data of the outbreak, has also had more television airtime in the last month than at any other time in his career.

COVID-19 press conferences have become a marker of daily life in Australia, as state and territory leaders front the cameras to update the community each day.

While the ACT kept the virus out - good management combined with a remarkable run of good luck - for a year, the ACT government could plan how they would tackle their own update format.

"So one thing we definitely took from that is, it's - rather than having journos shouting over each other, trying to get the call, that we would do it in a more orderly way," Mr Barr said.

He said it was also important to stay until all the questions have been asked and answered.

"A question unasked and unanswered just builds up and returns the next day, so you may as well deal with it then and there," Mr Barr said.

The Chief Minister acknowledged the difficulty in managing to tell the public as much as possible and respond to the outbreak behind the scenes.

The ACT government was criticised for delaying its notification of the disability sector about a cluster of cases in its community late last month, arguing its priority was to communicate directly with those involved.

Mr Barr said: "That's the balance you've got to strike between, I guess, sort of speculating from the podium as opposed to delivering facts that are verifiable. I'm aware from time to time that we just have to take on notice and come back and answer the next day. They are entirely legitimate questions."

Health authorities also did not want people to learn they had been affected by the outbreak at a press conference.

"But that often means that in a community as small as ours, the media will find out about things as well," Mr Barr said.

The level of COVID-19 news coverage in the ACT was also unique, the Chief Minister said, as more Canberrans were aware of what was happening in Victoria and NSW.

"It can sometimes feel like we are in this four-way communication challenge, where there's four talking heads to the community on television every night: me, Gladys, Dan Andrews and Scott Morrison," Mr Barr said.

"It's very clear that we're not saying the same things. That is a challenge in terms of how we step forward."

But while Mr Barr said he wished the focus on other states was less dominant in the community and the media,and there was more consistency in the messaging about the path from lockdowns, he was supportive of national cabinet's role.

"In the absence of national cabinet, it would be even worse than it is now, I would say, in terms of being able to have those discussions and try and get some agreed messages and agreed public policy responses," he said.

"I think it's the nature of things, that even though there might be 80 per cent agreement, it's the 20 per cent disagreement that is the focus of most of the debate. And national cabinet in its quieter, more productive moments has actually achieved quite a bit."

However, Mr Barr acknowledged his and the ACT's role on the national stage.

"You have some very big personalities and egos in that room, let me tell you. They reflect some of the personality types of the individual premiers but also just their relative weight in the federation in terms of population size and the like," he said.

The ACT has so far been able to contain the outbreak of the Delta variant of COVID-19 to an effective reproduction rate that hovers around 1, meaning most cases only infect one other person or no one else.

"Over the next month, the increased vaccination rate will continue to bend the curve in a positive way. What that allows is some more restriction easing, in an attempt to address some of the lockdown fatigue," he said.

Mr Barr said the extra doses of Pfizer announced this week, which meant the vaccination program would be sped up by about two weeks, should be welcome news to Canberrans.

For the time being, the Chief Minister will continue to front the cameras as attention turns to Tuesday, when Mr Barr will outline the settings beyond the scheduled end of lockdown on September 17.

"I've been getting a lot of unsolicited advice that it's time for me to have a day off, mostly coming from the community, which is very kind," he said.