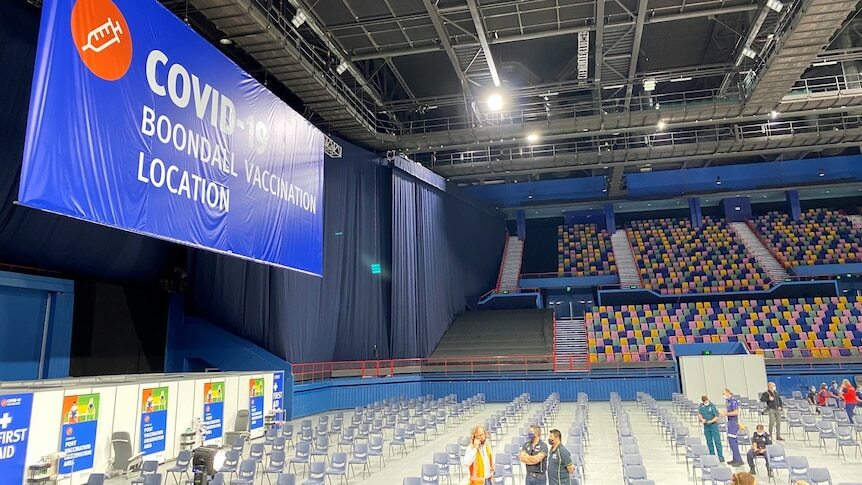 The Queensland government hopes walk-ins at vaccination hubs will be a game changer when it comes to ramping up the number of people getting the COVID-19 jab, when bookings start to drop off.

A new vaccination clinic at Boondall in Brisbane's north is set to include "walk-in days" — as will the one at Logan, which already trialled one this week.

And, it's a case of "come to the footy finals this weekend and get jabbed at a pop-up clinic" in Rockhampton, before fans head in to watch the game as part of a trial in regional Queensland.

No bookings are necessary for a growing number of clinics from Cairns right down to Stanthorpe, but only for priority groups, which include a range of professions from healthcare workers to fly-in fly-out workers.

Pop-up clinics have been set up at major transport distribution centres and abattoirs.

Premier Annastacia Palaszczuk said today the government's message today was "if you haven't been vaccinated, go and get vaccinated".

"From this weekend, Townsville, Mackay and Rockhampton [vaccination hubs] will be accepting walk-ins," she said.

"We'll be looking at where we can expanding that across other parts of Queensland in the coming weeks."

Chief Health Officer Jeannette Young said from next Monday, any Queensland from the age of 12 will be able to get vaccinated.

"So please come forward and get vaccinated — the more people are vaccinated, the less the risk of an outbreak spreading," Dr Young said.

Health Minister Yvette D'Ath is urging people to check clinics' walk-in availability and simply roll up, with the government set to ramp up "walk-in days" for the wider community as bookings taper off.

"At the moment we're finding most of our centres are 100 per cent booked, so there isn't room for walk-ins, but as soon as we start seeing any capacity because we get more vaccine, we can open up more spots," she said.

"So we'll be offering walk-ins, but don't wait — just as soon as you can find where you can get vaccinated do so.

"Because that is the best protection for when the virus does come into Queensland and start spreading."

Despite more than 6 million doses of Pfizer being sent from the UK and Singapore to bolster Australia's rollout, Ms D'Ath said the Commonwealth was still making it hard for Queensland to access doses.

Ms D'Ath said Queensland was grabbing as many vaccinations as it could with a further 60,000 being made available this week.

"I think the general population should be furious about the politics being played around vaccine supply," she said.

"The Commonwealth needs to stop playing each state off against each other, accusing us of lagging behind.

"I have done the statistics, I have looked at the figures, we were ahead of the New South Wales vaccination rate in June, before their breakout.

"Now we don't begrudge them that, but the Commonwealth has to stop picking fights particularly with Queensland and Western Australia.

"We weren't even told there was 60,000 available to us to order, so these are the games that are being played right now.

"I am a bit tired of the rhetoric and the stunts, if there is vaccine there, give it to the states.

"Greg Hunt also has said that we will get our catch-up supply in November.

"November? How does Scott Morrison expect us to meet our 70 and 80 per cent targets in October?"

Pharmacists ramping up the rollout

As the virus continues to spread through New South Wales, Victoria and the ACT, pharmacists have been approved en masse to vaccinate the nation.

They will be the only ones to offer the Moderna vaccine from this month, which was provisionally approved by the Therapeutic Goods Administration last month.

In Queensland, more than 600 pharmacists are already administering the AstraZeneca vaccine, and 65,000 doses have already been distributed.

The first doses of the Moderna vaccines are due to arrive in Australia next week and be made available to pharmacists from about September 20, Federal Health Minister Greg Hunt confirmed this week.

"We have been limited by a lack of supply, not motivation," Professor Perry said.

Queensland Chief Health Officer Dr Jeannette Young confirmed that GPs had only ordered 80 per cent of the total eligible allocation for the state.

"I encourage GPs to increase their orders to ensure as many Queenslanders can be vaccinated as quickly and safely as possible," Dr Young said.

"From next Monday, anyone from 12 years of age to 59 is eligible for a Pfizer vaccine and I would urge them to have that at their GP."

Dr Maria Boulton, chair of AMA Queensland Council of General Practice, said her practice had 2,000 people on a waiting list.

"Queensland has been the safe state, we have been able to contain our outbreaks, but we must use this time to focus on getting our population vaccinated," she said.

"Proportionately, Queensland is delivering less vaccines every week than the other states," he said.

"I just think the messaging in Queensland has been appalling. It really has crashed the credibility of AstraZeneca that was most available and has led to resistance of all ages."

He said comments by Dr Young about young people being at high risk of dying due to reports of clotting associated with AstraZeneca had damaged the vaccine program.

"It needs to be changed with better messaging and complacency needs to be addressed," he said.

"Eighty per cent full vaccinated in Queensland, I think, is a next year number."

According to the national plan, it is the magic figure set to open the country back up.