Widespread coral bleaching has now occurred on the Great Barrier Reef for the fourth time in seven years. As the world has heated up more and more, there’s less and less chance for corals to recover.

This year, the Morrison government announced a A$1 billion plan to help the reef. This plan tackles some of the problems the reef faces – like poor water quality from floods as well as agricultural and industrial runoff. But it makes no mention of the elephant in the room. The world’s largest living assemblage of organisms is facing collapse because of one major threat: climate change.

Our window of opportunity to act is narrowing. We and other scientists have warned about this for decades. Australia has doubled down on coal and gas exports with subsidies of $20 billion in the past two years. When these fossil fuels are burned, they produce carbon dioxide and other greenhouse gases that trap more heat in the atmosphere that also warms the ocean.

If our next federal government wants to save the reef, it must tackle the main reason it is in trouble by phasing out fossil fuel use and exports as quickly as possible. Otherwise it’s like putting bandaids on an arterial wound. But to help the reef get through the next decades of warming we’ve already locked in, we will still need that $1 billion to help reduce other stressors.

Why is this new bleaching event such bad news?

Past bleaching events have been linked to El Niño events. Stable atmospheric conditions can bring calm, cloud-free periods that heat up the water around the reef. That can bring extreme summer temperatures – and that is when corals bleach.

This year is a La Niña, which can bring warmer-than-usual temperatures but also tends to bring more clouds, rain, and storms that mix up the waters. These usually spread the heat to the deeper parts of the ocean and mean lower temperature for corals. Not this time.

Global warming means corals are already close to their bleaching threshold, and it doesn’t take much heat to tip the balance. Water temperatures across the reef have been several degrees hotter than the long-term average. And the corals are feeling the heat.

Four times in seven years means that bleaching events are accelerating. Predictions have suggested that bleaching will become an annual event in a little over two decades. It may not be that long.

You always remember the first time you see bleaching in real life. For co-author Jodie, that was in 2016, off Lizard Island, a previously pristine part of the reef far from human impacts or water quality issues. The water was shockingly warm. Looking at our dive computers, we saw that the temperatures we had been simulating in our laboratories for 2050 were already here.

For a week, the marine heatwave pushed the corals to their limits. When corals experience heat stress, some initially turn fluorescent while others go stark white. Then the water goes murky – that’s death in the water. It’s heartbreaking to see. Grief is common among marine scientists right now.

Read more: The $1 billion Great Barrier Reef funding is nonsensical. Australians, and their natural wonder, deserve so much better

Corals can recover from bleaching if they get a recovery period. But annual bleaching means there is not enough time for proper recovery. Even the most robust corals can’t survive this year after year.

Some people hope the reef can adapt to hotter conditions – but there is little evidence it can happen fast enough to outpace warming. While some fish can move to cooler waters further south, corals face ocean acidification, yet another problem caused by carbon dioxide emissions. As CO₂ is absorbed by the ocean, the changed chemistry makes it harder for corals to build their skeleton (and for other marine organisms to form a shell). There’s no safe place for corals to go.

What does the next government need to do?

The evidence is clear. We see it with our own eyes. We’re barrelling towards catastrophic levels of warming, and there’s not enough action.

As it stands, policies on offer by our two major parties will not save the reef, according to new research by Climate Analytics. Current Coalition emissions reduction targets of 26-28% by 2030 would lead to a 3℃ warmer world, which would be devastating for the Great Barrier Reef.

Labor’s policies of a 43% reduction by 2030 still lead to 2℃ of warming. The teal independents and the Greens have policies compatible with keeping warming to 1.5℃, though how to achieve those goals is unclear. What is clear is that every tenth of a degree matters.

We need leaders who are serious about climate action. Who can acknowledge the truth that the problem is real, that we’re causing it, and that it’s hurting us right now.

Read more: Australia's next government must tackle our collapsing ecosystems and extinction crisis

There are still a few people sceptical that humans can change the climate. But today the changes are apparent.

The words “unprecedented” and “record-breaking” are starting to lose relevance for natural disasters because they are used more and more. Australians faced the 2019/20 Black Summer of megafires. This year we’ve had major flooding. Marine heatwaves have killed off almost all of Tasmania’s giant kelp.

But climate impacts are also being seen around the world – extraordinary drought gripping California, fires in melting Siberia and events scientists consider to be “virtually impossible without the influence of human-caused climate change”. That includes the accelerating impacts on coral reefs worldwide.

We need government policies matching the scale and urgency of the threat. That means getting to net zero as soon as possible. It isn’t only about the reef – it’s about all land and sea natural systems vulnerable to climate change, and the people who rely on them. 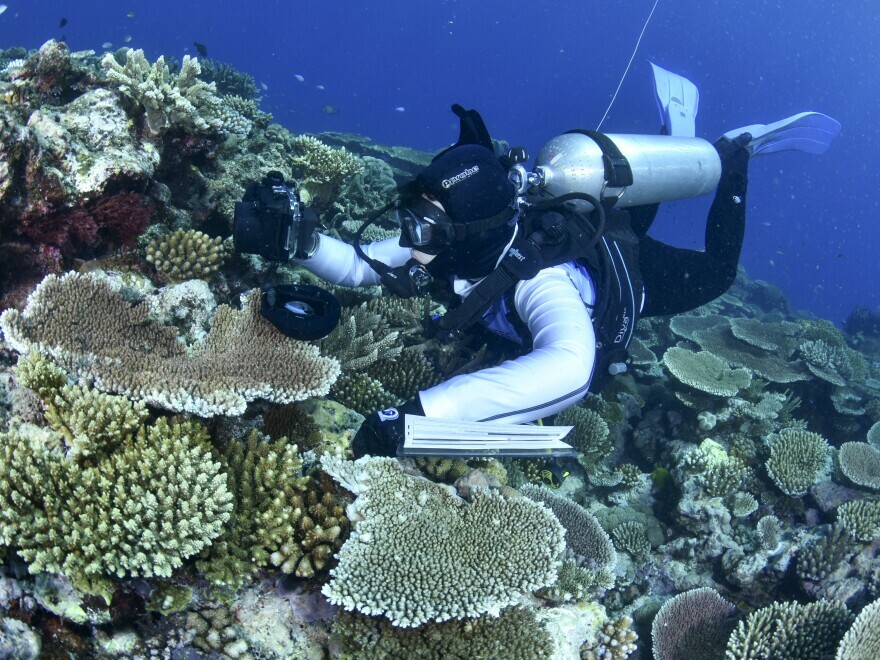