What happens if there is a vote of no confidence in Boris Johnson and how would it be triggered?

Boris Johnson has been fined for attending his own birthday party in the Cabinet Room during Covid lockdown. The prime minister is among the latest raft of event attendees fined by the Met Police, along with his wife Carrie Johnson and the chancellor Rishi Sunak.

He is now facing repeated calls to step down as prime minister. Labour leader Sir Keir Starmer, a former director of public prosecutions, urged Mr Johnson to resign as he noted that the police’s decision marked the “first time in the history of our country that a prime minister has been found to be in breach of the law".

Liberal Democrat leader Sir Ed Davey said we are now seeing "a government in crisis neglecting a country in crisis". He said: “Parliament must be recalled for a vote of no confidence in the Prime Minister.”

Mr Johnson confirmed he has paid his fine as he offered an apology for the "mistake". He said it “did not occur” to him that the gathering in the Cabinet Room on June 19 in 2020 to mark his 56th birthday was a violation of coronavirus rules.

Facing reporters at his country estate Chequers today, Mr Johnson was asked whether the would resign. “I have, of course, paid the FPN and I apologise once again for the mistake that I made," he said. "I want to be able to get on and deliver the mandate that I have, but also to tackle the problems that the country must face right now and to make sure that we get on with delivering for the people in this country. That is my priority," he said.

However, if the prime minister refuses to resign over the matter, Tory MPs may be able to force him out by holding a vote of no confidence.

What would trigger a vote of no confidence?

If just 15 per cent of Conservative MPs write to the chair of the backbench 1922 Committee saying they no longer have confidence in the leader, Tory MPs will be given the chance to vote in support or against Mr Johnson.

There are currently 360 Conservative MPs sitting in Parliament, meaning 54 letters would prompt a confidence vote.

If more than 50 per cent of all Tory MPs vote in support of the PM, he will remain as prime minister and can not face another vote for 12 months. However, if a vote is held and Mr Johnson loses, a it would trigger a leadership contest, which Mr Johnson would not be allowed to stand in.

How would a leadership contest work?

The second stage of the contest sees the two remaining candidates put to a vote of Conservative Party members.

Will a general election be held?

The next general election is scheduled to take place on May 2 in 2024.

There are two ways that a general election could take place earlier than May 2024.

Firstly, if the House passes a motion of no confidence in the government. The government would have 14 days to bring forward a replacement government and get its approval. If this doesn't happen, an election would be triggered. Secondly, a general election could be triggered straight away if two-thirds of the total number of MPs sitting vote in favour of one.

Is a vote of no confidence likely?

It's hard to tell at this stage. But, the mood within the Conservative Party does seem to have changed following the outbreak of the war in Ukraine.

One Tory MP who has previously criticised the prime minister, and openly admitted to handing a letter to the 1922 committee chair calling for a no confidence vote, now says Mr Johnson should not be unseated while the Ukraine conflict rages on. Sir Roger Gale said the fine should not distract from confronting Russia.

“My position remains that the fact that the Prime Minister has effectively misled the House of Commons is a very serious issue indeed, but we are in the middle of an international crisis and I am not prepared to give Vladimir Putin the comfort of thinking that we are about to unseat the Prime Minister of the United Kingdom and destabilise the coalition against Putin," he said today.

Scottish Tory leader Douglas Ross echoed that sentiment. Mr Ross had previously submitted a letter of no confidence in Mr Johnson’s leadership but withdrew it following the outbreak of war in eastern Europe. He now says it “wouldn’t be right” to remove the Prime Minister during the Russian invasion of Ukraine.

Foreign Secretary Liz Truss and Culture Secretary Nadine Dorries are among other senior Tories that have offered their backing to the under-fire leader.

At the previous height of the partygate saga, at least 15 Tory MPs publicly called for Mr Johnson to go, with the number privately expected to be higher. However, it is not known how many have withdrawn letters since the outbreak of the war. The number of letters received could still be some way off the 54 needed. 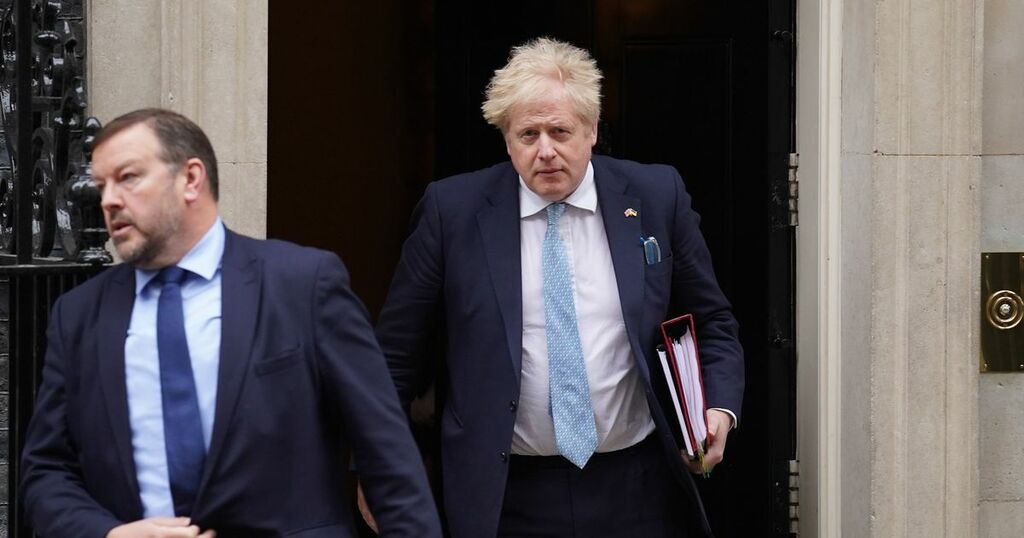 Manchester Evening News
One subscription that gives you access to news from hundreds of sites
Boris Johnson's refusal to resign - what will happen to Prime Minister after Partygate fine?

For most Prime Ministers, breaking the law would mean an immediate resignation

With any other Prime Minister, or Chancellor for that matter, being fined by police for breaking the law would have…

The Prime Minister's wife Carrie Johnson has also been fined

Daily Mirror
One subscription that gives you access to news from hundreds of sites
Boris Johnson fined over 'partygate': How much he paid and what the law says about Covid fixed penalty notices

As Boris Johnson is fined by police over lockdown breaches, what are the legal and criminal consequences of 'partygate'?