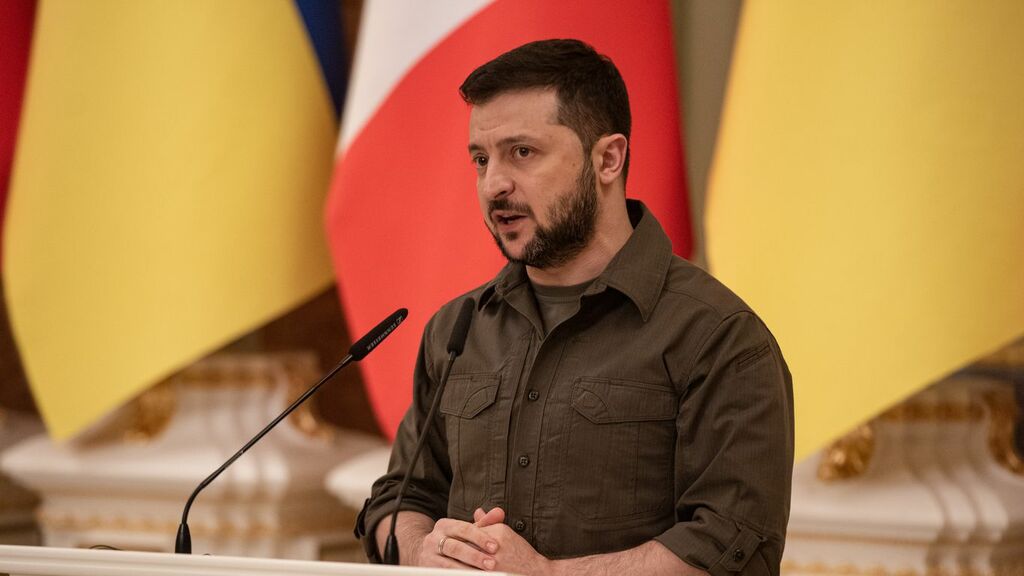 Zelensky urges action against Russia over Ukrainian ports blockade to stop global food crisis
"Without our agricultural exports, dozens of countries in different parts of the world are already on the brink of food…

This time last week, the world was anxiously awaiting the annual Victory Day celebrations in Russia for a clue as…

AFP
Get all your news in one place
Latest Politics news:

Ukrainian propaganda: how Zelensky is winning the information war against Russia

As well as success on the battlefield, wars are often won or lost through information advantage. In the Russia-Ukraine conflict, we might have expected Russia -– an old hand at propaganda -– to have bested Ukraine early on.

Russia’s deception operations have had a long history of global influence, most recently the troll farms that influenced the 2016 US presidential election in favour of Donald Trump.

In the current conflict, Russia’s propaganda efforts have consisted largely of censorship within Russia to maintain the fiction of the conflict being a “special military operation” rather than an invasion. Russia has created the narrative that this military operation is about ridding Ukraine of Nazis and fascists.

But propaganda does not have to be solely through media and speech. Russian threats of nuclear deterrence – test-firing a nuclear missile and issuing vague threats of nuclear war – to counter Nato support for Ukraine is one example. The massing of troops on the Russia-Ukraine and Belarus borders under the guise of a military exercise is another. These actions also convey a propaganda element because they project a threat message: comply, or else.

Interestingly, these fronts have been ineffective. Some Nato countries have countered Russian propaganda by releasing their intelligence assessments, including details of Russian “false flag” operations which were meant to make Ukraine seem the aggressor. Others are ignoring Vladimir Putin’s threats and arming Ukraine with weapons anyway. Sweden and Finland are now contemplating Nato membership – something previously unthinkable. These all have propaganda value.

Brave Russian civilians are demonstrating in in their thousands. And Russian troops are sabotaging their own vehicles. And of course, Ukraine has been releasing images of alleged Russian war crimes.

All of this has frustrated Putin’s plans and shifted the trajectory of the war. Ukraine’s underdog success story now looks more truthful around the world than the Kremlin’s denazification narrative.

But propaganda is not just the prerogative of the aggressor. Early on, Ukraine recognised the need to control how its citizens disseminated information and how that information would be used by the Kremlin. Consequently, Ukraine made it illegal to share images of Ukrainian troop movements or blast sites on social media, to hinder the Kremlin’s targeting systems.

At the beginning of the war, Ukraine was able to offer stiff resistance because its call to citizens to arm themselves was so successful. In addition to the conscription of men of military age, the overarching narrative in the western media was that thousands of Ukrainians were volunteering to fight. The Ukrainian president Volodymyr Zelensky tweeted after Russia launched its invasion: “We will give weapons to anyone who wants to defend the country” – sending a strong patriotic message that resonated with people of all types, genders and ages.

Ukrainian civilians are also helping the propaganda efforts by spreading footage of the realities of the war. Many have joined Ukraine’s “IT army” to hack and take down Russian websites.

Narrative to the west

Outside Ukraine, Zelensky’s public diplomacy efforts have focused on triumphing against giant odds. By highlighting its military successes against much stronger Russian forces, Ukraine leans into the David v Goliath myth, creating hope and support for the “little guy”. Pleading his case to Nato and the parliaments of various allies, including Japan, EU, Israel, UK, Canada, Germany and others, Zelensky has been feted in heroic terms.

Ukraine has also found success in a guilt-based narrative in the west, shaming Nato countries into providing more weapons to help Ukrainians defend themselves and for not severing economic ties to Russia fast enough. The finger was particularly pointed at Germany on this score – and Germany’s president, Frank-Walter Steinmeier, was told he was not welcome in Kyiv. Under political pressure, Germany has since announced it will send Ukraine tanks after all.

Ukraine’s western guilt trip extends to admonishing Nato countries (particularly Germany) for buying Putin’s oil and gas. This bid to get the west to declare total economic war on Russia is a useful line of persuasion for Zelensky, because oil and gas revenues represent a large tranche of Russian GDP. An embargo could force Russia to cease fire within months, as it loses the resources needed to finance its war effort. The EU has recognised the need for such an embargo and is aiming to put this in place, despite Hungarian opposition.

In the UK, the Ukrainian narrative taps into the British defence mission to be a “force for good in the world”. It also makes use of British wariness of Russia since the assassination of Alexander Litvinenko and the attempted assassination of the Skripals in Salisbury in 2018.

Ukrainian pluck and the country’s surprising success on the battlefield has led the UK prime minister, Boris Johnson, to recommend that Ukraine refuse to agree to peace talks with Russia unless it is in a strong position. This might mean pushing back the Russians to where they were before the invasion.

How the information war ends

Projecting Ukraine’s “underdog” status is important in tugging on western heartstrings. The west, but particularly Nato, probably knows Ukraine is operating this line of persuasion – but, given the hardship the country is going through, will respond positively to most of Zelensky’s requests (except enforcing a “no-fly” zone). From the west’s perspective, ridding itself of Putin’s malign influence in diplomatic, informational, military and economic terms would be a useful goal.

Both Ukraine and Russia are engaging in information operations and propaganda, but with different approaches. The Kremlin focuses on deception operations, censorship and false narratives – especially that of “denazification”. Ukraine is focused on diplomacy with the west and Nato, shoring up civilian morale and encouraging them to take up arms, highlighting Russian atrocities and Ukrainian combat wins and maintaining operational security (by denying Russia targeting information).

Ukraine has moral authority because it is using information operations to fight a war of necessity, – an existential battle of survival. The Kremlin meanwhile, is trying to fulfil an ambition to rebuild the Soviet empire that had been shattered after the cold war. In what looks increasingly likely to be a war of attrition, winning the information war will provide a big advantage on the battlefield – which is good news for Zelensky.

Paul Baines is Mayor of Charnwood, Councillor for Charnwood Borough Council, and a member of the Conservative Party. He has received funding from UK and overseas government departments for counter-terrorism/information operations research work.

Zelensky urges action against Russia over Ukrainian ports blockade to stop global food crisis
"Without our agricultural exports, dozens of countries in different parts of the world are already on the brink of food…

This time last week, the world was anxiously awaiting the annual Victory Day celebrations in Russia for a clue as…