Trade unions back Local Party's Leanne Minshull for Senate, in break with tradition

Several trade unions in Tasmania have broken with tradition to back the lead candidate of a newly founded political party over Labor in the Senate.

Local Party Senate candidate Leanne Minshull has received a campaign boost with the support of the Communications, Electrical and Plumbing Union (CEPU), the Maritime Union of Australia (MUA) and the Construction, Forestry, Mining and Energy Union (CFMEU).

The CEPU and MUA are affiliated with Tasmanian Labor, but, in breach of party rules, those unions are encouraging members to put publican Ms Minshull first at the ballot box.

CEPU state secretary Michael Anderson said his union believed Labor was unable to win a third Senate seat, so wanted to back in an alternative, progressive candidate.

"Our union's not playing games with this decision," Mr Anderson said.

"We're 100 per cent behind the ALP in the Lower House, because that's the house that creates laws for workers, good or bad.

"We need that to change and, if the ALP were in with a shot for the third seat in the Senate to fix up that sixth seat, we'd be supporting them."

"It would be poetic justice if a candidate backed by unions was the reason Eric Abetz lost his Senate seat," Mr Hassett said.

An electoral quirk has three Liberals — senators Abetz, Jonathon Duniam and Wendy Askew — vying to retain their seats on May 21.

Supporters of Senator Abetz have been running a below-the-line campaign in his favour after he was demoted to the difficult-to-win third place on the Senate ticket.

Poll analyst Kevin Bonham says it is likely Labor will hold two seats, the Liberals two seats and the Greens one seat, with the sixth seat within reach of the Jacqui Lambie Network candidate, Tammy Tyrell.

However, he said, it was not true that Labor was incapable of snagging a third seat.

"The chance of anyone other than Lambie Network getting the final seat depends on the Lambie Network vote collapsing, compared to last time, which it might do," Dr Bonham said.

"If it does collapse, it would not take a very big swing from the previous result for Labor to be in the mix.

"When you consider the supposed national swing, if that swing was on in Tasmania, then Labor would have a chance."

He said that it was difficult to assess Ms Minshull's chances, given the Local Party had not campaigned in the Senate before.

"They're a new thing. They're something that's only been tested in the [Tasmanian] Legislative Council election, where they didn't poll very much, given there were only five candidates," he said.

"My perception is they [will] probably do best around Hobart … at least, as of a few months ago, their polling in other parts of the state that I've seen has been very weak."

Voters 'coming away from major parties'

Ms Minshull — the former state director of progressive think tank The Australia Institute — said she had been approached by the unions with an offer of support.

"I can't comment on the decision-making of unions, but I think what's happening here is we're seeing voters come away from the major parties and look to align themselves with candidates that represent their values, and I think that it's not so unusual that we'll see organisations doing this as well," she said.

"This is a unique set of circumstances, because some people say the last seat in the Senate will be a race between myself, Tammy Tyrell and Senator Abetz. And, when we look at those candidates, we know what Abetz stands for. We don't know what Tammy Tyrell stands for, and my position on workplace relations is very clear."

Labor Party state director Stuart Benson did not respond to a request for comment.

The Local Party registered with the Australian Electoral Commission in March this year and is running four Senate candidates and two candidates in the House of Representatives.

Ms Minshull has been backed by Climate 200 and the Local Party — which describes itself as a network of independents — and she has received broad endorsement from Clark independent MP Andrew Wilkie. 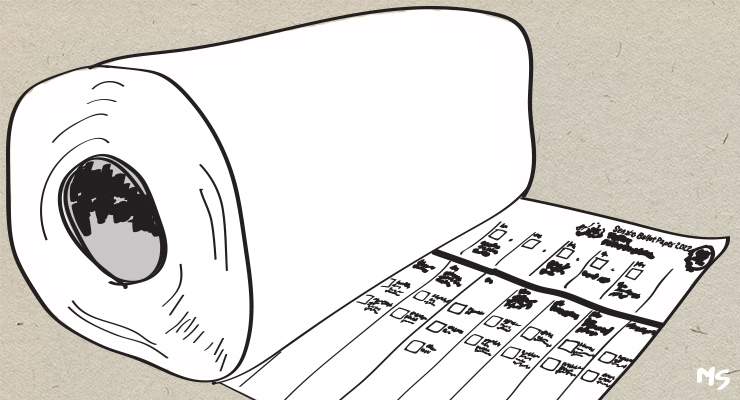 Labor’s two-state wish list for progressive Senate control
Even with an Albanese government looking more and more plausible, it’s not a sure thing that Labor will have control…

Crikey
One subscription that gives you access to news from hundreds of sites
Will he rise again? The second coming of Eric Abetz

Liberal Senator Eric Abetz may have been written off as yesterday’s man, but so was another Liberal politician and man…

The party is refusing to list the electorates benefiting from of one of its centrepiece health commitments, despite the party's…