The Atlanta Hawks Are Primed For A Consolidation Trade 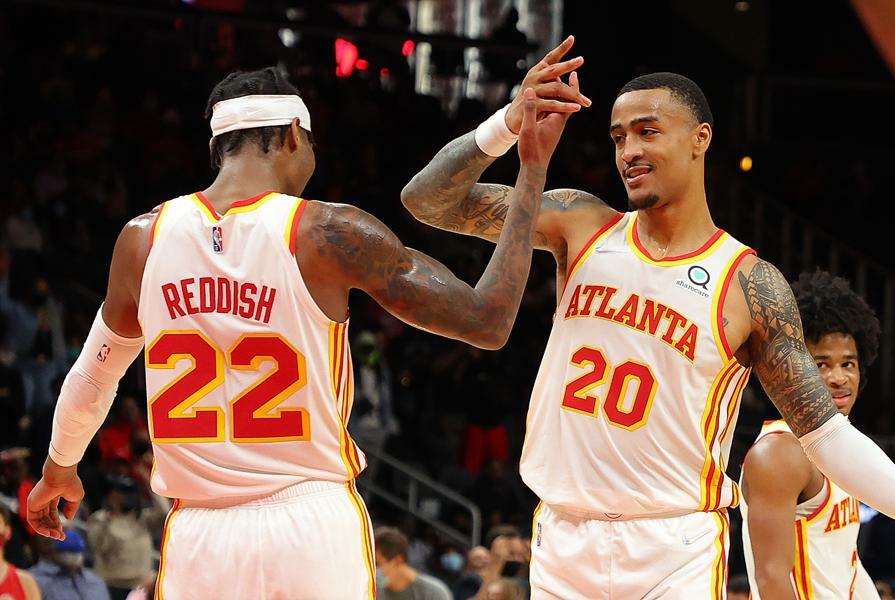 After a surprise run to the Eastern Conference Finals last season, the Atlanta Hawks have crashed back to earth this year.

The Hawks are a disappointing 17-22 nearly halfway through the season, which puts them 12th in the Eastern Conference. If the season ended today, they wouldn't even qualify for the play-in tournament, much less the playoffs.

That has Hawks general manager Travis Schlenk pondering whether he needs to make some major moves between now and the NBA's Feb. 10 trade deadline.

“Maybe it wasn’t such a great idea to bring everybody back," Schlenk said during an appearance on 92.9 The Game last week (h/t Zach Hood of Peachtree Hoops). "That’s on me. We have a few weeks here at the trade deadline and that’s what I need to figure out. … It’s my responsibility to put a product on the floor that can win. Right now, I’m questioning whether or not I have done that.”

Few teams are better poised to make a blockbuster deal in the next month than the Hawks. And given how the first half of their season has gone, they should be targeting a consolidation trade if a big-name player becomes available.

Over the past two years, the Hawks acquired veterans such as Danilo Gallinari, Bogdan Bogdanovic and Clint Capela to complement their young core of Trae Young, John Collins, Kevin Huerter, De'Andre Hunter, Cam Reddish and Onyeka Okongwu. That seemingly set them up to toe the delicate line between winning now and winning later, much like the Golden State Warriors this year.

But at a certain point, depth can become more of a hindrance than an asset. If players aren't getting enough minutes or touches because a team has so many other mouths to feed, it's difficult to keep everyone satisfied.

In an interview with SkySport, Gallinari hinted that the lack of a clear hierarchy is part of what's plaguing the Hawks this year (via Chris Kirschner of The Athletic). Reddish and Hunter missed most of their playoff run last year with injuries, but their returns have complicated rotation patterns and shot distribution.

If the Hawks do decide to make a move before the deadline, they can put together a variety of packages depending on what other teams want. Gallinari is the most logical place to start.

In his age-33 season, Gallinari is averaging only 9.8 points on 41.0 percent shooting in 22.3 minutes per game. The Hawks are paying him $20.5 million this season, but only $5 million of his $21.5 million salary for next year is guaranteed.

If the Hawks move him in a package for a star between now and the trade deadline, his contract would be an asset for salary-matching purposes. His new team could then decide whether to keep him around next year or waive him to free up $16 million in cap space.

However, if the Hawks wait until the summer to trade him, he'll count as only $5 million in outgoing salary. Teams would get no cap savings by acquiring him and then waiving him, which would make him a far less attractive trade piece.

The Hawks could dangle Collins as their main salary-matching chip, too. He has reportedly "grown increasingly frustrated over his role in Atlanta," according to Shams Charania of The Athletic, after signing a five-year, $125 million contract this past summer.

" The 6-foot-9 big man has challenged the Hawks locker room on multiple occasions to play team basketball and commit to one another this season," Charania reported Monday. "Oftentimes, Collins has felt his voice go unheard."

Charania mentioned Collins and Reddish as a potential package for Philadelphia 76ers three-time All-Star Ben Simmons, who still has yet to play this season following an offseason trade request. Both Charania and Marc Stein of Substack have mentioned the Hawks in recent days as a potential Simmons suitor, as he could potentially help fortify their 27th-ranked defense.

Reddish has been a fixture in trade rumors for the past month or so. In mid-December, Charania reported rival teams were "expressing interest" in him, "but those teams believe Atlanta seeks a first-round draft pick for Reddish."

Both Reddish and Hunter will be eligible to sign extensions this offseason. If the Hawks don't reach an agreement with either player by the mid-October deadline, they'll become restricted free agents next summer.

By the time their extensions kick in, Gallinari will be off the Hawks' books, and Bogdanovic may turn down his $18.0 million player option for the 2023-24 season as well. However, Young, Collins, Capela, Huerter and Okongwu are projected to earn a combined $103.4 million in 2023-24, so extensions for both Reddish and Hunter could push the Hawks into luxury-tax territory.

The Hawks may be banking on a significant salary-cap spike once the NBA's new national TV contracts take effect ahead of the 2025-26 season to help reduce some of their financial pain in the future. But at a certain point, fears of a ballooning luxury-tax bill will cause them to start losing some of their depth.

If the Hawks are leaning toward not re-signing Hunter and/or Reddish, now would be the time to cash in on them. They should try to make another team deal with those extension negotiations this offseason while they move forward with whomever they receive in return.

Because the Hawks are so deep at the moment, they could blow a team out of the water with a blockbuster trade offer. Although the Boston Celtics reportedly have "no interest" in breaking up their star forward tandem of Jayson Tatum and Jaylen Brown, per Charania, would a deal involving Gallinari, Okongwu and one of Reddish or Hunter make them reconsider that stance?

The Hawks would be left with a rotation of Young, Bogdanovic, Brown, Collins and Capela with Huerter and either Hunter or Reddish, which is still plenty deep. In Brown, they'd also have the top-end complement to Young who could potentially help them go on another lengthy playoff run.

Championship windows are fleeting in the NBA. While the Hawks' future looked enormously bright after last year's playoffs, this year has snapped them back to reality. They’re currently a +2700 to win the Eastern Conference, trailing five other teams.

Gallinari, Reddish and Hunter may all be attractive trade chips at the moment, but that value might decrease following this year's trade deadline. The Hawks should thus be calling front offices around the league in search of a consolidation trade over the next month.