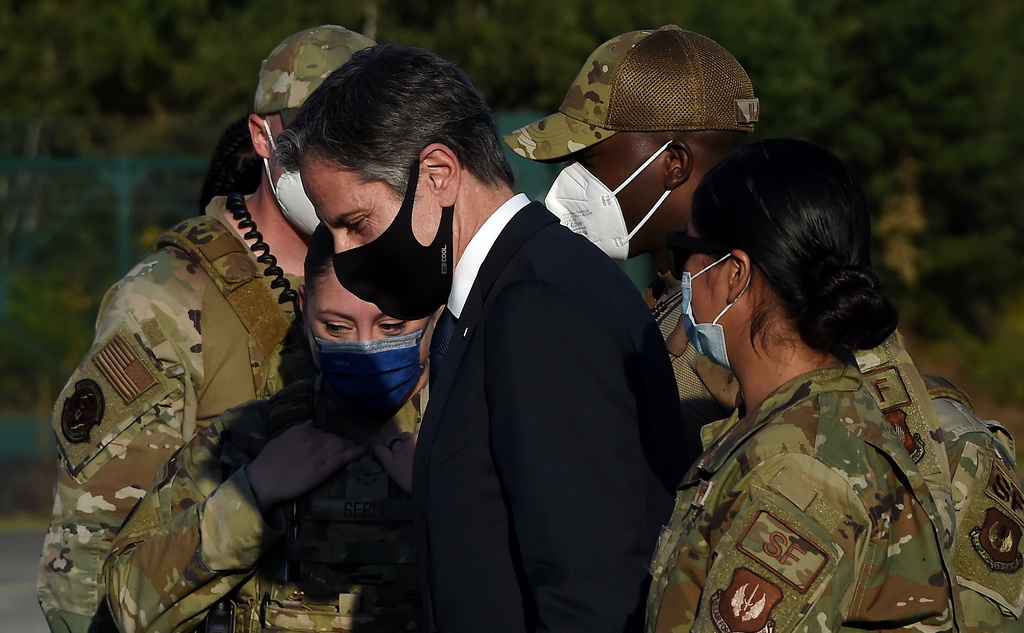 The new Taliban-led Afghan government must live up to its commitments to allow safe passage for those looking to leave Afghanistan, US Secretary of State Antony Blinken has said.

Speaking from Germany on Wednesday during a virtual meeting of the foreign ministers of United States-allied nations, Blinken outlined three “core objectives” of US policy towards Afghanistan following the completed withdrawal of American troops from the country.

Enabling the departures of people seeking to leave, “preventing terrorist groups from using Afghanistan as a base”, and ensuring a flow of humanitarian assistance top the Biden administration’s agenda, Blinken said.

“We must hold the Taliban, including the recently announced caretaker government and any eventual Afghan government, to their commitment to allow foreign nationals, visa holders, and Afghans to travel outside the country if they wish,” he said.

“The Taliban has said repeatedly that any Afghans who want to travel and have the appropriate documents will be able to do so.”

He specifically urged the Taliban to allow the departure of charter flights seeking to evacuate American citizens and vulnerable Afghans from the northern city of Mazar-i-Sharif. According to reports, hundreds of people have been waiting for clearance to leave the airport there for several days.

Scott Cooper, a nonresident senior fellow at the Atlantic Council and a US military veteran who served in Iraq and Afghanistan, said getting people who want to leave out of Afghanistan is likely to be the most challenging of the administration’s three objectives.

“The thing that strikes me is how limited these objectives are,” Cooper told Al Jazeera. “If you were to look at any of the statements of Secretary Blinken’s predecessors or to those that were engaged in Afghanistan, this is far different than anything that we were talking about from late 2001 onward.”

Washington had expressed reservations about the Taliban-led interim government announced on Tuesday. The transitional cabinet is dominated by leaders from the group, including Sirajuddin Haqqani, a US-designated “global terrorist” who was named as interior minister.

Earlier on Thursday, Blinken reiterated Washington’s criticism of the new Afghan government but said the US would continue to coordinate with the Taliban.

“It certainly does not meet the test of inclusivity, and it includes people who have very challenging track records,” he said of the new government. “Engagement with the Taliban – and with a government interim or long term – will be for purposes of advancing the national interest, advancing our interests, the interests of our partners.”

Blinken added that Washington will engage with the Taliban in ways that “are fully consistent” with US laws.

At a joint news conference with Blinken at Ramstein, a US air base west of Frankfurt hosting thousands of Afghan refugees, German Foreign Minister Heiko Maas also criticised the new Afghan government.

“Together with other partners, we are calling for fundamental rights, especially those of women, to be protected. In that context, the news that reached us from Afghanistan yesterday does not make us optimistic,” Maas said on Wednesday.

“A transitional government that does not include other groups is not the signal for more international cooperation and stability in the country.”

Blinken said later that the Taliban can only obtain recognition through an inclusive government that meets the expectations of the international community, including a respect of basic rights, humanitarian access and “not allowing Afghanistan to harbour terrorists”.

I am profoundly impressed by the around-the-clock, lifesaving coordination at the Afghan Reception Center at @RamsteinAirBase. During my visit, I witnessed Americans and Germans working side-by-side to facilitate the safe transit of thousands of Afghan evacuees. pic.twitter.com/EAeRco6idd

“You have to talk to the people that you must talk to,” he said. “And so, there is not a formal recognition of the Taliban as the government of Afghanistan, but it would be against our own interest to not be speaking to them and coordinating with them.”

Blinken is concluding his first foreign trip since the US completed its chaotic withdrawal from Afghanistan amid the Taliban’s takeover of the country.

In a meeting with the emir on Monday, Blinken thanked Qatar for its “extraordinary support in facilitating the safe transit of US citizens, our partners, and other Afghans at risk”, the State Department said earlier this week.

He also expressed gratitude on Wednesday to Washington’s other partners for their help during the evacuation operation from Kabul last month.