Spillway discharge to resume at Srisailam 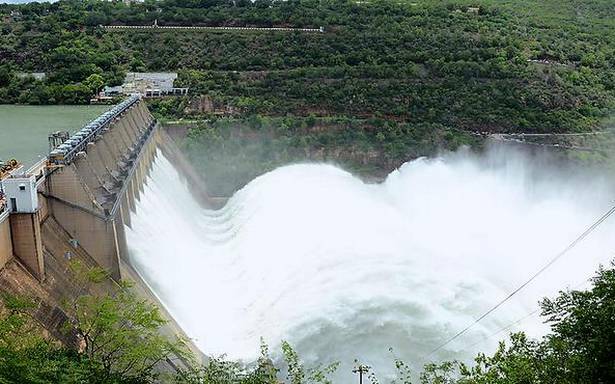 Heavy rains in the catchment areas of Upper Krishna Basin in Maharashtra and Karnataka are set to bring in another bout of heavy flood to Srisailam with the possibility of authorities lifting the crest gates to resume the spillway discharge at the inter-State project in a couple of days.

An advisory issued by the Central Water Commission (CWC) stated that water level in Krishna Basin rivers such as Yerala, Nira, Bhima and others was forecast to rise for the next few days following heavy rains in their catchment areas for the last few days. During the 48-hour period till 8.30 a.m. on Tuesday, Mahabaleshwar recorded 21.3 cm rain followed by 13.2 cm in Agumbe and 18.2 cm in Koyna.

The rainfall in Mahabaleshwar and Koyna was expected to increase flood to Almatti and Narayanpur dams and the rain in Agumbe is likely to bring more flood to Tungabhadra. Coupled with flood from Bhima sub-basin, the inflow to Jurala is expected to be in the range of about 2 lakh cusecs by Wednesday evening. The flood monitoring officials said discharge of flood at Narayanpur would go beyond 1.5 lakh cusecs by the wee hours of Wednesday.

In the Godavari Basin, the inflow to Sriramsagar was over 31,200 cusecs and discharge to river was nearly 26,000 cusecs as at 8 p.m. on Tuesday. With the Upper Godavari Basin in the Nashik is likely to get more flood to Sriramsagar over the next few days as most of the projects and barrages in the upstream are full.

Singur, Nizamsagar, Mid Manair, Lower Manair and Kaddam projects were getting moderate inflows up to 2,500 cusecs with all of the except Mid Manair having near full reservoir level storage.