As floodwaters continue to drop across Brisbane, some inundation adjacent to the river may not recede until early next week, the city's flood mitigation and water storage dam operator says.

Queensland's Deputy Premier Steven Miles said while the flood emergency was far from over, the recover process had begun, with the damage bill estimated to be up to $1 billion.

"The Brisbane River peaked at 2.49 metres last night, under the major flood level. This was lower than the predicted peak of 2.6m and well within the moderate flood level range," he said.

Some 30,000 homes remain without power, most of them located in the Brisbane, Ipswich and Logan areas.

It comes as the Bureau of Meteorology (BOM) warns of more storms expected today that "could still be dangerous and result in localised or flash flooding".

The BOM has also predicted more rain towards the end of the week for the south-east, with thunderstorms and rain likely on Thursday and Friday.

Wivenhoe Dam, which provides both flood mitigation and water storage for Brisbane, has risen from about a quarter full to nearly three-quarters full in less than five days. It currently sits at about 160 per cent capacity.

Water is being released from the dam to drain its flood mitigation compartment in case of further wet season rain.

He said the process would likely take until next Monday with releases designed to keep the water flows within the river's banks.

Mr Foster said some areas adjacent to the river were likely to have water around for longer while the releases took place.

"What I'm saying is for all intents and purposes we are seeking to keep the flows in the river banks but with the topography of the river, we are likely to be in a situation where those flood waters are, the flows are going to keep those levels where they are,'' he said.

However, Mr Foster said the total water going into the river would be reduced, because the Lockyer Creek and the Bremer River, which flows into the Brisbane River below the dam, had peaked.

"Our guys are looking at the total megalitres that came down the Bremer and the Lockyer combined and it was two Sydney Harbours,'' he said.

He said it took about 10 hours for the Lockyer Creek water to reach Brisbane and between 16 and 20 hours for water from the Bremer to come down.

Mr Foster said the Wivenhoe releases would cease by next Monday and Brisbane should see some sort of normality on Tuesday, although the river would still be very murky.

More rain to come this week

Yesterday Premier Annastacia Palaszczuk said the weather system had dumped the equivalent of 80 per cent of the region's total annual rainfall in two to three days.

She said over 30 suburbs across the south-east had received over 1000mm of rainfall.

The BOM is predicting the easing of all flood levels in south-east Queensland.

A statement on the bureau's website said the Brisbane River was likely to peak at 2.8m at Brisbane City on Tuesday evening with "minor to moderate peaks to continue on high tides until Wednesday".

The bureau did warn of more rain to come later in the week.

"From Thursday onwards, every day we could get about 20 to 30mm and could even be closer to triple figures given the amount of thunderstorm activity,'' said senior meteorologist Helen Reid.

"At this stage we are not looking at what we have just seen but it will be noticeable while people are trying to clean things up."

Ms Reid said the thunderstorms and showers could continue into next week.

She said the intensity should ease off later in that week. 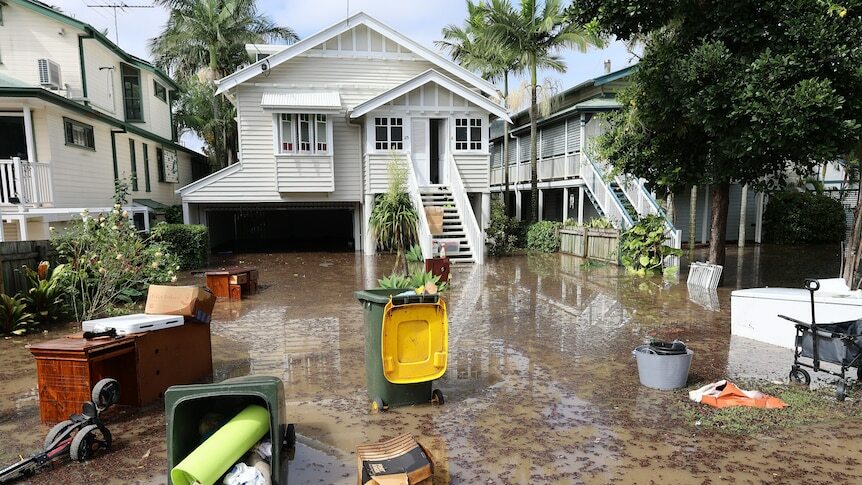 Queensland Premier defends BOM weather warnings ahead of south-east flood disaster that killed eight, inundated thousands of homes
Queensland Premier Annastacia Palaszczuk says there was little more the state government could have done to reduce the damage from…

ABC News
From analysis to the latest developments in health, read the most diverse news in one place.
What caused the ‘rain bomb’? How the unprecedented Queensland and NSW 2022 floods unfolded

Storms bring lightning and torrential rain to parts of south-east Queensland already devastated by flooding, with the Bureau of Meteorology…

Six people have died across state, while Gympie records highest flood level in more than 100 years

The Guardian - AU
One place to find news on any topic, from hundreds of sites.
Brisbane flood: warning up to 15,000 properties could be inundated as river reaches peak