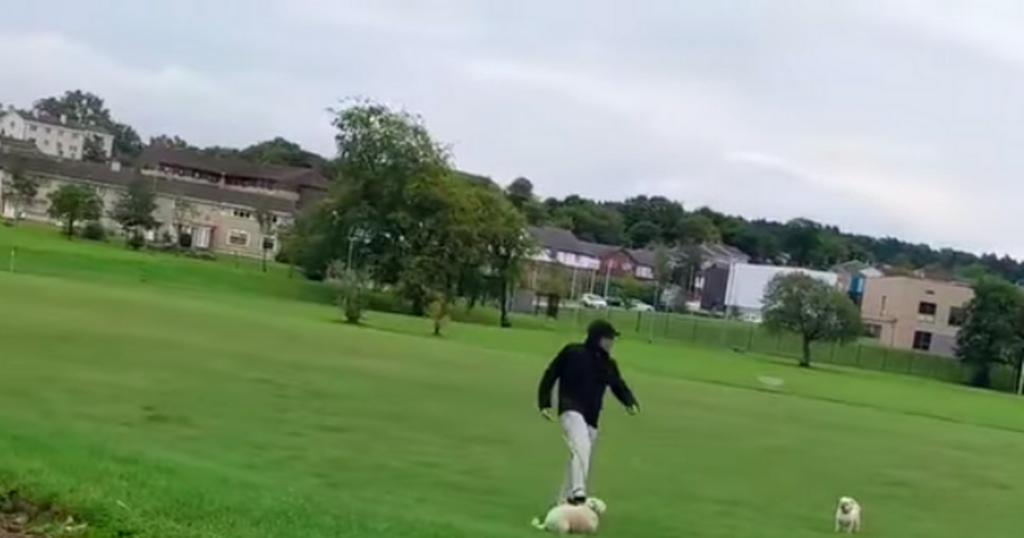 A dog owner has shockingly been caught on camera booting his pet in the ribs as he launches a verbal attack on horrified onlookers.

The man was videoed after kicking the defenceless animal four times when it slipped its lead.

After the dog approached another pet, the man started to boot the terrified pooch before getting into an argument with other walkers.

Horrified Ross McAusland, 31, tried to intervene in a bid to help the poor pooches - believed to be called Winston and Bailey.

He told the Record: "I missed the first kick but there were another two or three I missed before I started recording.

"The dog had slipped its lead and ran over to play with another dog. When the dog wouldn't go back to him he walked up to it and kicked it.

"The the dog ran away and he went up to it and booted it again.

"The three kicks before I was filming were much harder the the one I filmed.

"It has got a nervous band on it as well which is a yellow collar and yellow lead warning other dog owners not to approach it.

"I wonder why it is nervous? No wonder, the poor animal has an abusive owner.

"I've got a rescue dog so my blood was boiling."

In the footage, the yob can be heard getting into a heated debate with a female dog walker who is trying to help the pet following the incident.

He threatens her throughout the video as he shouts at the two dogs to come back to him.

At one point her can be heard saying to the woman: "You're lucky I don't hit women."

The man can be seen kicking the poor dog as both animals he is walking then run away and look terrified.

Scottish SPCA inspector Robyn Myszor said: “We can confirm this incident has been reported to us. As it’s an ongoing investigation we cannot say anything further at this time.

"If anyone has any information relating to this incident then it can be reported confidentially to our animal helpline on 03000 999 999.”

A Police Scotland spokesperson said: "Around 8.20pm on Tuesday, 14 September, police received a report of a man seen assaulting a dog.

"A diary appointment has been made with the reporter to establish further information regarding the incident."