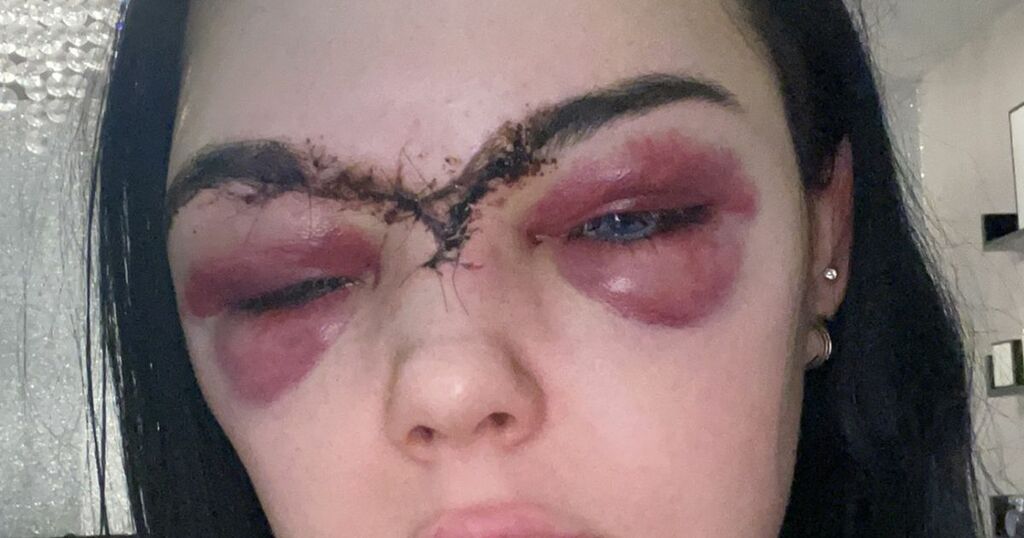 An award-winning showjumper was left looking 'like a goldfish' with huge bulging 'golf ball' eyes after a horror stables fall that saw her split forehead in half.

Abbi Diamond was out feeding her Dutch Warmblood, Blue, after Christmas when she tripped on uneven ground and fell, smashing her head on the kerb.

The 19-year-old was rushed to A&E by the stable owners and was horrified to discover the 'bone-deep' 5cm cut needed 17 stitches.

In addition to the bloody gash on her forehead, Abbi's eyes ballooned so rapidly she was left temporarily blind with 'golf ball eyes' and looking 'like a goldfish'.

Concerned doctors warned the administrator that she will be left permanently scarred by the freak accident.

Now Abbi is warning others to be extra cautious and always wear a helmet after her simple daily task turned into a traumatic experience that she is still recovering from.

Abbi, from Edinburgh, Scotland, said: "It was a normal day. I got up to go to the horse and she's currently unwell so she's on box rest.

"I was holding on to her lead rope and I lost my footing, I tripped on a pot hole or something and I fell.

"Blue can be quite flighty so I didn't let go of her, so didn't put my hands out to protect my face, and my whole face went straight into the kerb.

"With Blue being so flighty, the reaction is not to let go in case she runs up onto the road - my main priority was to keep her safe.

"I got straight up and looked on my phone to look at it. I had to call the staff to come and get Blue. I was like 'urm, my forehead is in half if someone can help me'. The cut was probably at least 5cm in length and was bone-deep at one point."

Abbi has owned 11-year-old Blue for four years and competed in show jumping competitions with her, but admits she never thought she would sustain such a serious injury away from the arena.

Now the former award-winner has been left unable to feel her forehead entirely, while she waits patiently to see the long-term damage left by the fall.

Abbi said: "It was really deep. I was dying to see what it looked like properly so my mum took a picture while I was sat in A&E waiting for it to be stitched up.

"It was a deep gash from one brow straight into the other one. It went down to my eyelid as well and I have 17 stitches in there.

"There wasn't any surgery but they gave me anaesthetic, though I couldn't really feel anything anyway.

"They cleaned it up. It took them about 40 minutes to stitch it up.

"The plastic surgeon looked at me and checked all my movements, it was quite worrying.

"I still don't have feeling in my forehead but I'm hoping that will come back.

"It's been hard not really knowing and when I'm washing my hair, it's quite difficult.

"Both eyes were fully closed for two or three days. It was really strange, it was hard, I worried about losing my eyesight.

"I was supposed to go on holiday on December 31st to Tenerife. I was sat in A&E and asked if I could still go on holiday.

"They said I could still go so I thought it mustn't be that bad, but I went home and fell asleep and when I woke up, I couldn't see a thing.

"I looked like a goldfish with golf ball eyes. A few of my friends have kindly said I look like an ant too.

"At least it's not my permanent face and I don't even look like that now. It's nuts how quickly it's healed.

After three days, one of Abbi's eyes finally started to go down and she was able to film some videos for her followers to explain what had happened.

Now she is sharing her story to warn other horse riders to stay safe even while off their horse - urging them to wear hats even when they think they are safely on the ground.

Abbi said: "One eye slightly opened and that's how I managed to make the TikToks and explain what was going on. It's had about 5.1million views which is almost the population of Scotland.

"[Medical staff] said there would be a scar and it would affect my eyebrows. That was a bit of a worry as I'm into my makeup. Even [when I'm] not wearing make-up I'm a girly girl.

"It's a little bit scary but they've told me it's such a clean cut that it will be easily covered with make-up.

"One eyebrow is completely fine but the other one is hard to see because I have stitches through my eyebrow. It's a case of waiting to see what it looks like when the stitches come out.

"I might have to get them tattooed on or draw them on every day.

"The chances of injury when out show-jumping were high, but I never thought it would happen now."

Since her accident, Abbi has resolved to stay optimistic and still hopes to ride her beloved Blue again in the future.

Abbi said: "I'd tell people to make sure they wear the correct footwear and even a hat.

"A lot of people don't put their hat on while handling their horse on the ground, you just think everything will be fine. If I'd worn a hat my injury wouldn't be as bad.

"I've been trying to be as positive as possible about what's happened. It's healing really well.

"There are people out there who have it a lot worse than me.

"There's a possibility we'll ride in the future. We've got a mark to see if Blue's rideable again in April time, whether that's to take her for a wander or ride in the school.

"I'm hoping to get back on board, I'm desperate to get on.

"It's about being super careful now as I managed to rebook my holiday for January 15th. I'm staying indoors until then because I'm so clumsy.

"The scar will heal over time and people on TikTok have sent me all these lotions and potions to help.

"People have been so lovely and it's so nice to see that side of social media. I've had thousands of comments from people offering support."