NAKHON SI THAMMARAT: The new Sarng Anacot Thai Party, founded by former key members of the ruling Palang Pracharath Party (PPRP), hopes to win at least one seat in each province in the South in the coming general election.

Sarng Anacot Thai (Building Thailand’s Future) on Saturday introduced two candidates who will contest the general election in Nakhon Si Thammarat. They are Thavornwat Khongkaew, a former governor of the province, and Warin Chinnawong, who runs a major pomelo business and was a former chairperson of the the provincial chamber of commerce.

Mr Uttama said now was not time for trials anymore as Thailand’s economy was at the turning point. Sarng Anacot Thai, he said, had clear-cut policies to address economic problems, including the energy crisis and other issues.

Mr Uttama was a former PPRP leader and former finance minister in the coalition government led by the party.

Mr Nipit praised the capabilities of the party’s two candidates in Nakhon Si Thammarat. Mr Thavornwat has worked closely with local residents and knew their problems well while Ms Warin was well-versed in economic and agricultural issues, he said.

The election is due to be held early next year but could be called sooner if the administration of Gen Prayut Chan-o-cha runs into political trouble.

Sarng Anacot Thai has said it would propose Somkid Jatusripitak, a former deputy PM who served in both the PPRP-led coalition and in the administrations of Thaksin Shinawatra and his sister Yingluck, as its prime ministerial candidate.

Mr Nipit said his party would win at least one seat in each southern province.

“I am confident that Sarng Anacot Thai will win at least one seat in each southern province. The party has presented an economic team that is considered to be more outstanding than those of other parties — Pheu Thai, the Democrat Party and PPRP. If people are ready to go together with us, we are ready to carry out our work in line with our policies,” said Mr Nipit, a former deputy leader of the Democrat Party.

Discussing the Democrats’ target to win more than 50 seats in the next election, Mr Nipit said he offered his encouragement to the party to achieve its goal.

The key to success for the Democrat Party is in the South. But in his view, the party has not yet regained the dominance it once had in the region.

Many longtime Democrats were not happy that the party decided to join the military-linked PPRP coalition after the 2019 polls. The party leadership is also dealing with image problems arising from multiple allegations of sexual misconduct against former deputy leader Prinn Panitchpakdi. 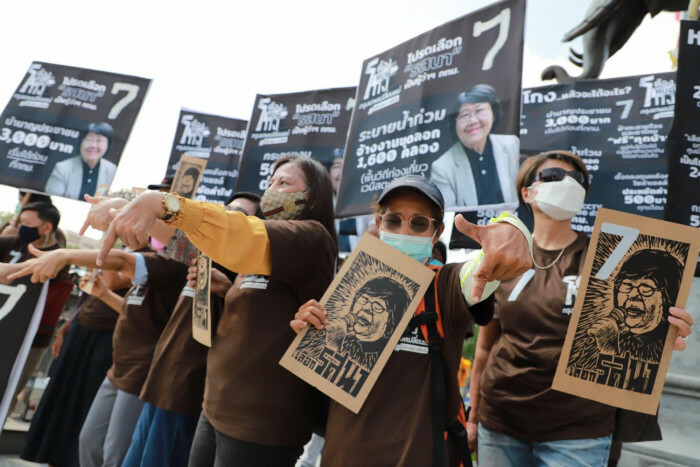 Scare tactics set to fall on deaf ears
If you don't choose us, HE will return!

Bangkok Post
One subscription that gives you access to news from hundreds of sites
Nida Poll: Chadchat favourite for Bangkok governor

Former transport minister Chadchat Sittipunt is the favourite candidate for Bangkok governor, according to the latest opinion survey.

Police say they will summon the embattled former deputy leader of the Democrat Party, Prinn Panitchpakdi, to acknowledge a charge…