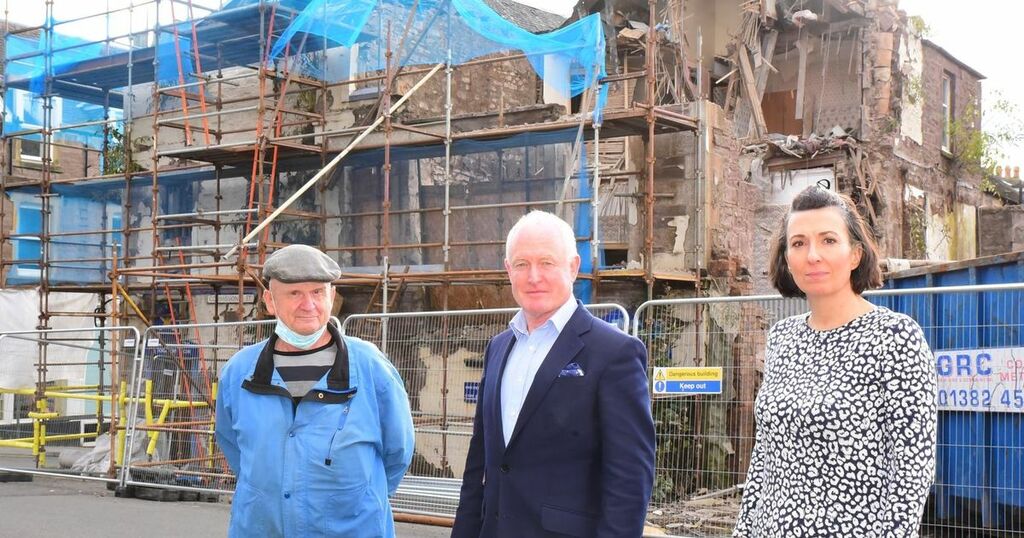 An emergency road closure is expected to be enforced after business owners were horrified to see work stop this week during the demolition of a notorious building in a Perthshire town.

Residents and owners of properties neighbouring the former Strathearn Hotel in Crieff called for the safety measure to be implemented immediately in a bid to avoid a potential accident.

Ailsa Campbell, of Campbell’s Bakers in King Street – which abuts the crumbling structure – claims she was told by a Perth and Kinross Council officer that it would take six weeks before a road closure notice could be put in place.

She said: “The relevant council departments need to take control of the situation quickly.

“King Street needs to be closed so the final, most dangerous part of the demolition, can be carried out. .

“Every day that this demolition is held up, there is a risk of a strong autumnal storm coming and de-stabilising the building even more and who knows what damage to other buildings or people could happen.”

It is understood PKC has rescinded the scaffolding permit due to serious health and safety concerns regarding its construction.

Mrs Campbell continued: “It is such a wreck. Cars and people are at risk. We will have to close when the road closes and the work starts again as we can’t risk anybody getting hurt.”

William Frame of Braemore Estates has properties in Commissioner Street, close to the former hotel.

He said: “I have been in property all my working life and have never seen such a dangerous situation.

“The council has been absolutely fantastic at awarding a grant to get this eyesore demolished.

“However, work has stopped on the site and this is because they do not have a road closure agreement certificate and it seems to be being withheld for reasons of council bureaucracy.”

Strathearn ward Conservative councillor Roz McCall said local authority officers had gone “above and beyond” in a bid to get the road closure signed-off since being alerted to the situation on Wednesday and “protect the people of Crieff.”

A PKC spokesperson said: “The scaffolding erected on the pavement and roadway fails to meet the minimum safety standards and therefore the council has revoked their permission until it is made safe.

“It is the developer’s responsibility to ensure the building is made safe until all permissions and safeguards are in place.

“Unfortunately, the demolition works are at a stage where the developer should already have a road closure in place.

“The developer was advised in August that an application for a road closure can take up to six weeks to approve, and should apply in advance.

“No application has been submitted as yet.

“The council has no option now but to grant an emergency road closure to safeguard the public.

“The developer must first submit an application and details of the road management system and these will be assessed urgently.”