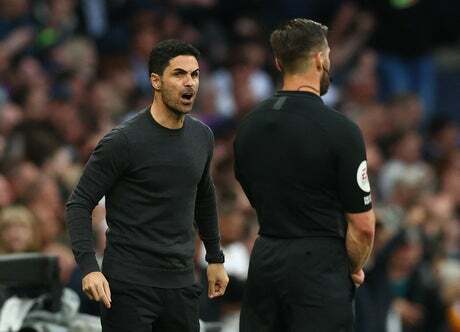 Mikel Arteta furious with referee for ‘destroying’ north London derby as Arsenal fall to heavy defeat
Mikel Arteta refused to comment on referee Paul Tierney’s performance after Arsenal’s 3-0 defeat to Tottenham, claiming he would be…

Evening Standard
Read news from The Economist, FT, Bloomberg and more, with one subscription
Learn More
AC Milan Back on Top after Snatching Title from Inter

Newsroom.co.nz
From analysis to good news, read the world’s best news in one place
Dixon: Indy 500 pole "huge" result but only "step one" to victory

Mikel Arteta has been branded a “mini-me” by Richard Keys following his seething post-match interview after the north London derby.

Arteta refused to give his opinion of the referee’s performance after Cedric Soares conceded a contentious penalty and Rob Holding was sent off in Arsenal ’s 3-0 defeat by Tottenham . Cedric was adjudged to have pushed Son Heung-min in the box before Holding picked up two yellow cards in quick succession for fouls on the same player in the first half, helping Spurs pick up a comfortable win to close the gap to fourth place in the Premier League.

Paul Tierney did not hesitate in sending off the Arsenal centre-back, whose dismissal prompted Arteta to move Takehiro Tomiyasu into the middle of defence and Granit Xhaka to left-back. Arteta had centre-back Ben White on the substitutes’ bench but chose not to use him – a decision which was criticised after Harry Kane scored his second goal with a diving header from a corner four minutes after Holding’s red card.

BeIN Sports presenter Keys thought Arteta’s post-match interview with Sky’s Geoff Shreeves had echoes of Manchester City boss Pep Guardiola, who Arteta worked under before taking the Arsenal job. Keys tweeted : “Mini-me wasn’t very happy was he? He’s got a point. How dare the opposition try to win? He’s just like Guardiola there.

“Ok. Pen was soft - but he should’ve taken Holding off. That was his fault. Well done @GeoffShreeves. Still the master in the tunnel.”

Rather than launching into a criticism of Tierney, Arteta chose to watch his words, in fear of picking up a suspension. “If I say what I think I am suspended six months,” he told Sky Sports. “I am allowed to give my interpretation of what I thought, but I do not like to lie. I cannot say what I think, I will be suspended.

HAVE YOUR SAY! What did you make of Mikel Arteta's post-match interview? Comment below.

“I am so proud of my players. Ask the referee to come here and explain his decisions. That's his decision. Such a beautiful game was destroyed here.”

On the decision to send off Holding, he added: “The decision is made. I cannot change it. The referee has to make the decision and react in football.”

Arteta was also asked why he didn’t bring on White following Holding’s dismissal. “To take the risk in the situation didn't make any sense,” he said. “Now we focus on Newcastle. That's our focus. This game is history.”

Despite defeat, Arsenal remain in fourth place, a point ahead of Spurs with two Premier League games left to play. The Gunners travel to St James’ Park to face Newcastle on Monday before finishing the season against Everton. Spurs host relegation-threatened Burnley on Sunday before concluding their campaign away to relegated Norwich.

Mikel Arteta furious with referee for ‘destroying’ north London derby as Arsenal fall to heavy defeat
Mikel Arteta refused to comment on referee Paul Tierney’s performance after Arsenal’s 3-0 defeat to Tottenham, claiming he would be…