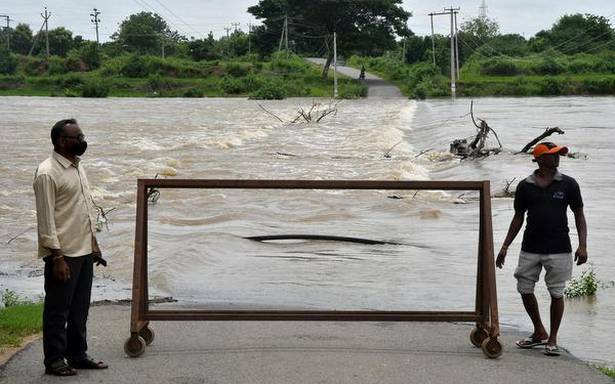 Heavy rains lashed large parts of the old undivided Khammam district for the third day in a row on Tuesday, throwing normal life out of gear, with overflowing streams obstructing vehicular movement on several internal and main roads in both Khammam and Bhadradri-Kothagudem districts.

Multiple incidents of extensive waterlogging on roads and residential localities were reported from different parts of the district. A house situated along the banks of the swollen Murreduvagu stream at Sanjeevnagar in Laxmidevipalli mandal caved in on Tuesday morning. Luckily, the inmates of the house were away at the time of the incident.

Rainwater entered several houses in Vidyanagar, Saraiah Colony, Ramnagar in Chunchupalli mandal and encircled dozens of houses in low-lying areas including Subashchandra Bose Nagar in and around Kothagudem.

Incessant heavy rains wreaked havoc in the district with crops in hundreds of acres getting submerged under a sheet of rainwater in several parts of the district.

The water level in Godavari at Bhadrachalam rose to 34 feet, around nine feet below the first flood warning level of 43 feet, at 6 p.m. on Tuesday.

A flood control room (08744-249994) was activated at the RDO’s office in Kothagudem to monitor the rain situation and deal with any exigency. A WhatsApp number (93929-19743) was also made available for people to report rain-related incidents.

In Khammam district, Munneru, Akeru and Buggeru streams were in spate at Teerthala, the famous pilgrim centre, in Khammam rural mandal.