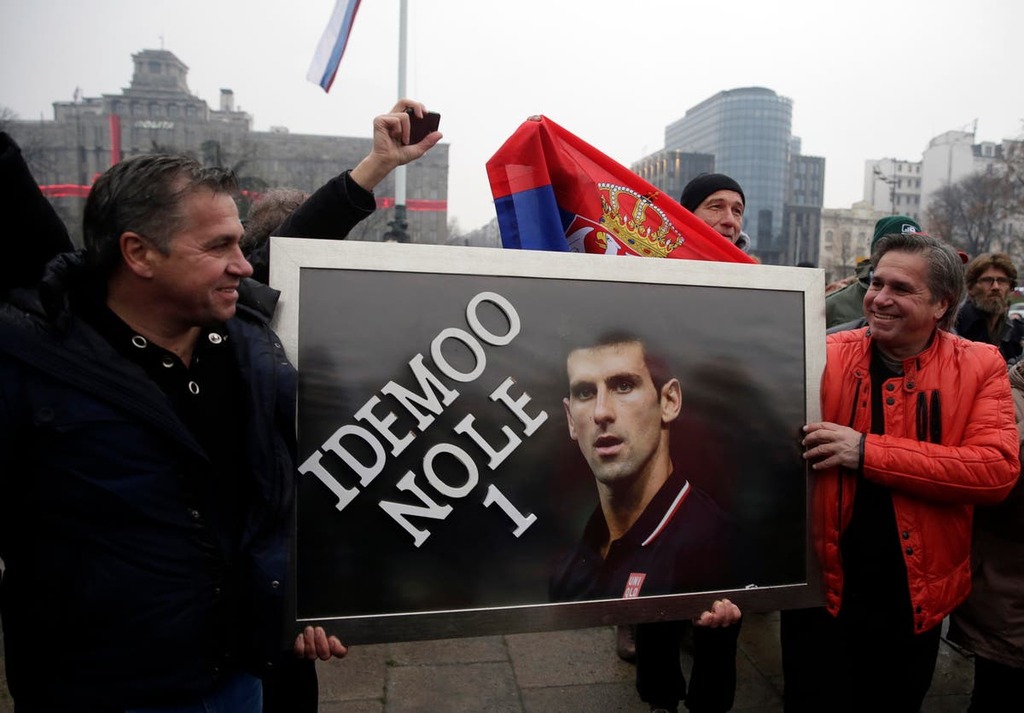 The troubles of anti-vaxxer tennis star Novak Djokovic in Australia are fuelling the flames of nationalism in his home country, Serbia, where many perceive the way he has been treated in the ongoing visa saga as an affront.

After several twists and turns, Mr Djokovic was released from detention on Monday after a judge quashed the government’s decision last week to cancel his visa over Covid rules. Yet the unvaccinated Serb could still face deportation, and border officials are investigating whether he made a false travel claim before flying to Australia.

On Wednesday, Mr Djokovic faced fresh scrutiny as he admitted a mistake was made on his Australian entry documents and also to meeting a journalist last month in Belgrade, Serbia’s capital, despite having Covid.

The drama over his transgressions has already become a geopolitical matter, with the prime ministers of Australia and Serbia in talks about the tennis pro.

Serbian Prime Minister Ana Brnabic asked her counterpart Scott Morrison during a call on Tuesday morning that Mr Djokovic be treated with “dignity”. Just hours later, as reports emerged that Mr Djokovic had made public appearances in Belgrade after testing positive for Covid, she urged the player to explain a “grey area” about when he received his results.

Meanwhile, Serbia’s far-right president Aleksander Vucic has described Australia’s enforcement of its strict Covid rules a “political witch hunt,” and the foreign ministry issued a statement claiming that Mr Djokovic was being treated like “a criminal, terrorist or illegal migrant”.

“I’m pretty sure it’s political,” Bosnian Serb lawmaker Snjezana Novakovic Bursac told The Independent during an interview in her east Sarajevo office. “So many misunderstandings are not possible. I think there was some attempt to stop him from being the best in tennis. It’s because he’s not from a western country. He’s Serbian, and a Serbian man.”

It is a view shared by many Serbs around the world.

Last week, dozens of Serbians could be seen protesting outside the hotel in Melbourne where Mr Djokovic was detained, while hundreds of his supporters demonstrated against his treatment in Belgrade and other strongholds of Serbian ethnic identity.

Across social media platforms and on the airwaves, Serbians around the world have rallied with Covid vaccine sceptics to support the tennis star and criticise Canberra.

“If they do [deport Djokovic], the Australian government will show the whole world that they are the bad guys,” Serbian-American journalist Ksenija Pavlovic McAteer told a far-right UK news outlet.

Social media users have noted that the 34-year-old 20-time Grand Slam winner has donated hundreds of thousands of dollars to Italian, Serbian and Spanish hospitals to fight against Covid, and has given funds to Australia to fight wildfires and help disadvantaged children.

"It’s not the vaccine that’s the problem,” one fan tweeted. “It’s because he’s Serbian and the best tennis player in the world.”

Another fan on social media claimed Mr Djokovic’s plight was “just because the greatest comes from a small country in the Balkans.”

Mr Djokovic is a national hero in Serbia, as well as across the Balkans, where his anti-vaccination stance is shared by many. His strife in Australia comes at a time of surging Serbian nationalism throughout the region.

Bosnian Serbs are threatening to secede from Bosnia-Hercegovina, endangering a peace deal forged 27 years ago. Serbs are enraged and have threatened military action over the potential ascent into Nato and the European Union of neighbouring Kosovo, which declared independence from Serbia 14 years ago.

London-based historian Marcus Papadopoulos claimed the tennis star was being targeted for his ethnicity because Serbs “defied” the west in 1990s, when Nato forces bombed Serbia over its continued support for alleged war crimes perpetrated by ethnic Serbs in Bosnia.

“Novak Djokovic is an appetising target for both British and American mainstream media, given that racism towards Serbs is inherently entrenched in Western media outlets,” he wrote on Twitter.

Elsewhere on social media, other voices celebrated Mr Djokovic’s plight and praised Australian authorities for dealing a blow to Serbian nationalism, albeit indirectly.

“Australia, by accident, gave a huge blow to the far-right nationalists in Serbia by [persecuting] a notorious Serb extremist such as Novak Djokovic,” said one user on Twitter.

Mr Djokovic has sometimes appeared with Serbian ultranationalists, who count him as one of their own. In 2020, he publicly received a gift commemorating a far-right World War II military leader who is a hero to Serbian extremists. In September, he was spotted among Bosnian Serb nationalists at a gathering that included a former deputy of convicted war criminal Ratko Mladic, who was behind the massacre at Srebrenica.

But while many ethnic Serbs still hold a grudge against the west and mostly avoid Muslim areas of Bosnia as a legacy of the 1990s war over the ethnically divided nation, Mr Djokovic does not.

Despite the furor, some Serbs expressed bewilderment that the Djovokic saga had become major international news, and were frustrated at how their nation and countrymen were being perceived on the global stage.

“Usually Serbs are used to being the victims,” said Danka Ninkovic, a political analyst in Belgrade. “I  don’t see any connection between his treatment and being Serbian. But there are Serbians who do.”