After a fuel strategy didn’t work out well with the way the cautions fell, Newgarden made a late pitstop under yellow, and had to climb from 14th, which he did with a great jump into 10th. Then at the next restart, he made a bold dive up the inside of three cars on the penultimate restart, and as Grosjean’s Andretti Autosport-Honda approached the apex of Turn 9, the #2 Penske-Chevrolet drew fully alongside.

However at the speed he was going on cold tires, Newgarden required the full width of the track on corner exit and that wasn’t available to him since Grosjean was there. That sent the AA-Honda hard into the concrete wall, which brought out a yellow flag, then the red flag to ensure the race finished under green.

The 2017 and ’19 champion felt there was nothing wrong with his maneuver, telling NBC Sports, “I was alongside him fully if not fully ahead. I haven't seen it from the outside.” Then after watching the replay he said, “I'm already ahead of him at that point.

“Welcome to IndyCar: it gets tight. The big thing was that I was ahead at that kind of moment. It's tight street course racing and I almost got taken out six times myself.

“Probably need to have a discussion with some of the younger guys, they're just aggressive. And if you're not aggressive back, then you get run over. You've got to learn that pretty quick. I don't like it, but that's the game that we're in.

"Ultimately we had a big fight back with the PPG car, that's all I can say. This has been a really frustrating year in a lot of ways – we've won a ton of races and not had a ton of good luck. All thanks to the team and the effort that they've put in, but more often than not we're either winning the race or things are going completely against us.

“So that has built frustration for me, because it's hard to see it happen to this crew. I hate it too, I'm very competitive. Happens a couple of times per year, that's part of it, but it's just happened one too many times - and today was another unlucky day with how it played out."

Marcus Ericsson, former championship leader, hit Twitter to express his lack of sympathy with Grosjean, who he felt was responsible for his DNF, after being struck by the Andretti car and losing drive. Following Grosjean posting “angry face” emojis, the Indy 500 winner responded, “What goes around comes around.”

What goes around comes around

Despite Dixon’s win, Power retained his championship lead despite Graham Rahal pushing Pato O’Ward’s car into the rear of the #12 Penske causing the gearbox to go into emergency mode on Lap 26 of the 80-lap race. He would eventually salvage 11th, but his lap times were off by 1.5-2sec.

“We had the gear thing pretty early,” said the 2014 champion. “Probably not even 30 laps in, we got hit from behind. Whatever they have on the gearbox... I’ve had it a couple of times and multiple people have, so maybe they should change it.

“If you get hit from behind, it knocks out your shifting so you have to manually shift. You have to lift [on upshifts] and you have to blip the throttle. That makes it an interesting day. I sat back and watched so much mayhem…

“We thought this would be a bit of a wildcard race, like there was going to be a lot of mayhem so you just needed to survive it somewhat, which we did.

“We’re still in a great place and still digging deep. We’ll see what we can do in the last three races.”

Power’s lead shrunk from eight to six points, but his nearest competitor is now Dixon, with Ericsson 12 points back, Newgarden 22 down, and defending champion Alex Palou 33 in arrears. 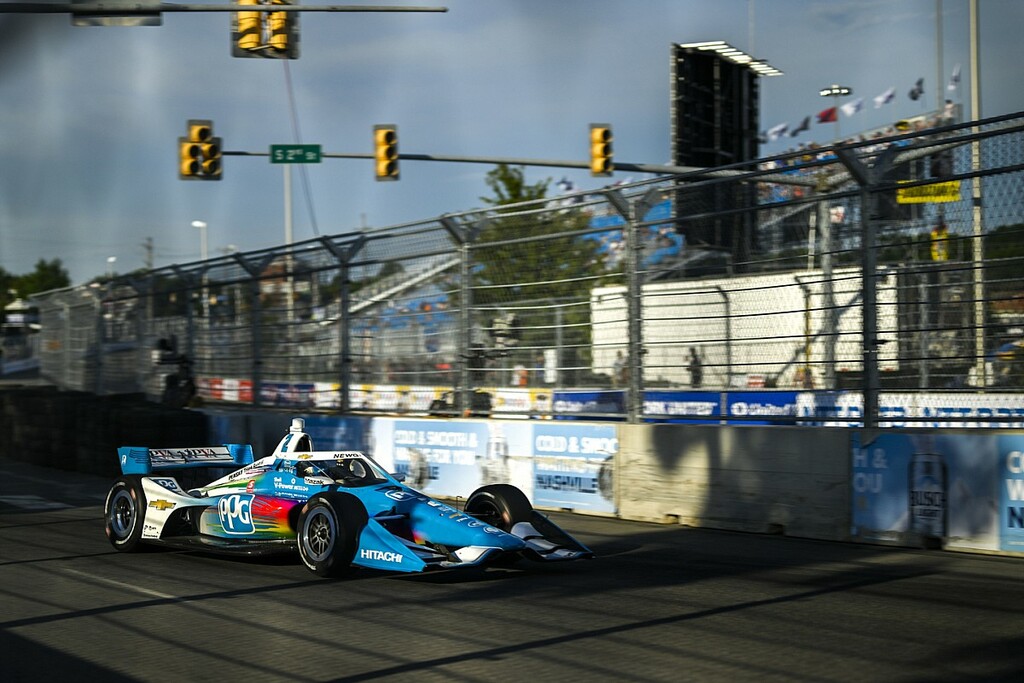 Autosport
From analysis to the latest developments in health, read the most diverse news in one place.
Nashville IndyCar: McLaughlin beats Grosjean to pole

Scott Dixon, who will start the Big Machine Music City Grand Prix only 14th, showed the race pace of his…