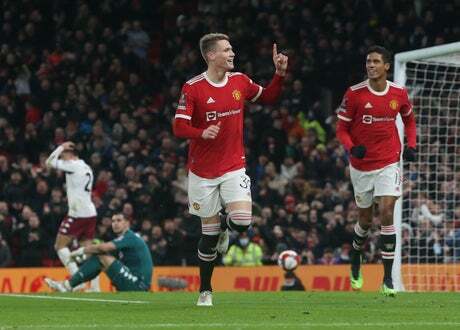 Man United were below-par again but they did just enough to beat Aston Villa 1-0 and reach the fourth round of the FA Cup.

Scott McTominay’s header after eight minutes proved to be the only goal of the game, as Ralf Rangnick’s side set up a home tie with Middlesbrough in early February.

Villa were certainly the better time at Old Trafford, and had a Danny Ings goal harshly ruled out in the second-half, but will regret their lack of clinical edge.

Rangnick’s side came into the match after a poor performance to lose to Wolves last time out, and there was plenty to be concerned about once agin.

United made a fast start to the match though, and they got their reward in the eighth minute. They had a corner cleared out to Fred, who put a brilliant ball back into the box and McTominay rose highest in the box to head home.

But Villa responded really well to going behind. Emi Buendia dragged an effort wide of the far post, while John McGinn saw his fierce strike from 20 yards out saved by David de Gea.

Ollie Watkins came closest to getting his side back on terms, as he pounced on a terrible touch from Victor Lindelof to burst forward, chop back inside but then saw his effort cannon off the bar.

Despite their defensive frailties, United still looked a threat themselves on the attack. McTominay had a couple of shots from range, before Marcus Rashford had an effort cleared off the line by Matty Cash in the last seconds of the first-half.

The visitors thought they were level five minutes into the second-half, when Danny Ings bundled in from close range. However, after a long VAR review, it was ruled out for an earlier foul on Edinson Cavani.

Watkins then had the ball in the end too , but the offside flag went up after Ings was beyond the last defender as he dinked it through to his strike partner.

Ezri Konsa and Cash had efforts saved, while Watkins saw a strike curl just wide of the post, as Villa completely dominated the second-half.

United managed to weather the storm though, and the visitors were unable to have the same sort of attacking threat in the final 15 minutes.

It was another below-par performance that will concern Rangnick, but he and his team this time had the comfort of reaching the fourth round of the FA Cup.