La Palma’s volcanic headache: what to do with all the lava and ash

By Ashifa Kassam in Madrid 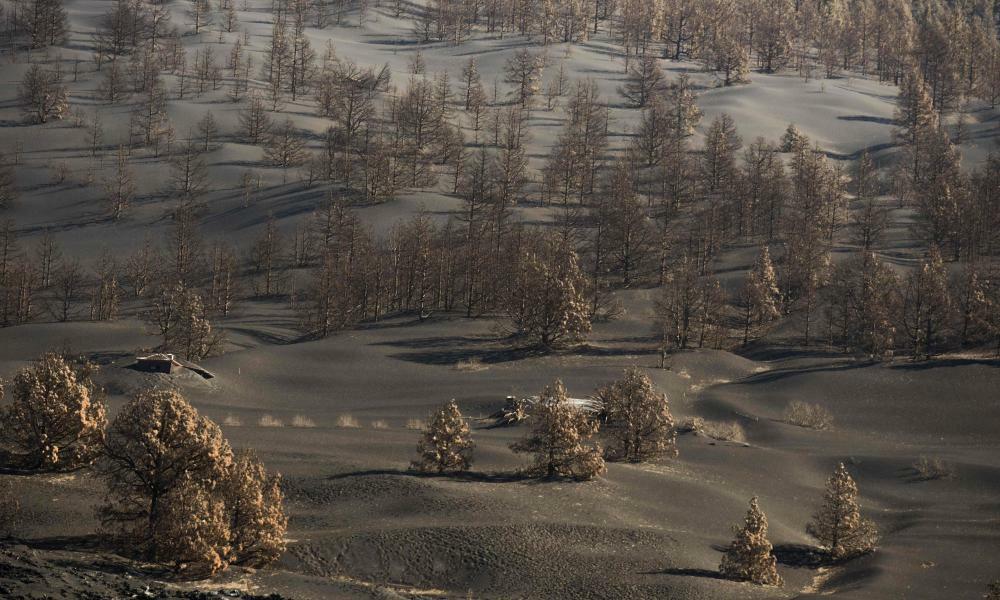 For three months they were subject to whims of a roaring volcano. Now residents on the small Spanish island of La Palma are wrestling with another dilemma: what do with the millions of cubic metres of lava and ash it left behind.

The volcano rumbled for 85 days, ejecting ash and rivers of lava that swallowed more than 1,000 homes, cut off highways and suffocated the lush banana plantations that drive the island’s economy.

The eruption was declared over on Christmas Day, leaving residents grappling with the daunting task of rebuilding. “It’s brutal,” said Javier Moreno, one of La Palma’s 80,000 residents. “The affected area looks as if they erected the Berlin Wall, but made of black lava.”

In recent days about 2,000 of the 7,000 evacuated residents have been allowed to return home. Many arrived to find layers of powdery ash coating their homes, patios and plants – remnants of the more than 200m cubic metres of lava and ash expelled by the volcano.

“It’s a continuous battle,” said Moreno. “You clear it away today, tomorrow the wind blows over a few more centimetres.”

In parts of the island the ash buried homes, engulfed verdant plantations and accumulated in metres-high banks. The lava and ash reached beyond the island; lava cascading into the ocean during the eruptions created two new peninsulas, measuring 44 and five hectares, while underwater footage revealed marine life covered in ash.

While round-the-clock efforts to clear the ash have succeeded in stockpiling some of it in specific areas such as a former quarry on the island, removal of the red-hot flows of lava that sprawled into neighbourhoods and farmland has proved trickier.

“They continue to store heat, with temperatures of more than 500 degrees [Celsius] in some parts,” said Inés Galindo, a geologist who heads the Canary Islands unit of Spain’s Geological and Mining Institute.

Once the lava cools – a process that could take months – it might be easier in some cases to build on top of it rather than breaking it up and removing it, she added.

As researchers and officials scramble to figure out what could be done with the materials spewed out by the volcano, they’ve looked to history. In the nearby island of Lanzarote, a six-year eruption in 1730 left parts of the island covered in volcanic material. “The particles were porous and able to retain water in the soil … they took advantage of it to plant vineyards,” said Galindo.

She and her team are now studying the properties of the ash in La Palma to see whether it could be used in a similar way while another team of researchers are probing whether the mineral-rich soil could be used as fertiliser.

Regional officials, meanwhile, are exploring the possibility of using the ash to build homes, roads and bridges across the island. “It’s not an original idea, we’re using the techniques that the Romans used,” said Javier Juvera, an engineer with the department of public works in the Canary Islands. “The Romans worked with the ashes that came out of [Mount] Vesuvius, using them to build their basilicas and buildings.”

His team is now working to determine whether the ash scattered across the island is similar to the volcanic ash used by the Romans to bind rock fragments. If so, it could give rise to a durable construction material and play a role in rebuilding the island, where regional officials have estimated the loss of buildings and infrastructure at more than €900m (£750m).

Juvera described the ideas as a seemingly natural fit for a for an archipelago hewn from volcanic activity spanning millions of years. “In the Canary Islands we’re used to working with volcanic materials,” he said, citing the longstanding practice of mixing cement and material extracted from volcanic cones to build homes.

Both Juvera and Galindo said it would be months before they had any definitive answers on what could be done with the blizzard of dark ash ejected by the volcano. “The quantity of materials is so enormous – there are images of homes that were practically buried in ash,” said Juvera. “But if we don’t find a value for it, it becomes waste.”