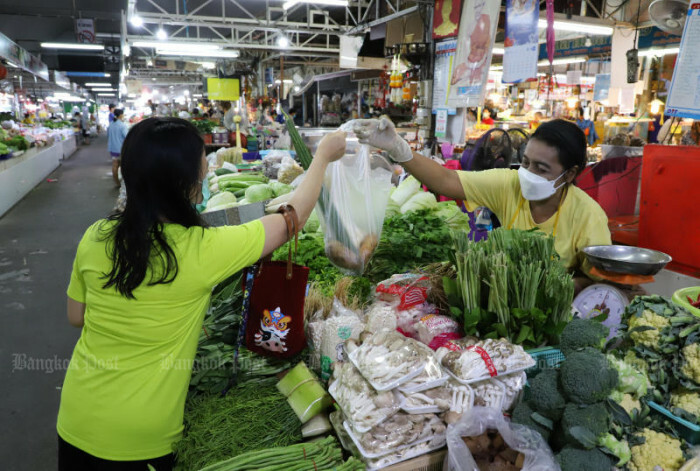 Consumer sentiment plunged for the fourth straight month in April, hitting the lowest level in eight months, as consumers remained…

Bangkok Post
Explainer: Should we be concerned about the baht?

Thailand started off this week with the baht weakening to a five-year low of 34.62 against the greenback. While in…

Industry leaders warn of challenges ahead for Thai economy

Despite a gradual recovery projected for the tourism sector, Thailand's economy still faces a spate of challenges including the persistent pandemic and the impact of Russia's invasion of Ukraine, which has disrupted global commerce, pushed up oil prices and threatened food supplies.

Executives shared their insights on Wednesday on the country's economic prospects at the PostToday Forum 2022, a seminar hosted by Post Today, which commemorated its 20th year in business.

Sanan Angubolkul, chairman of the Thai Chamber of Commerce, said the Thai economy remains brittle, with higher inflation and rising product prices driven by a sharp increase in oil prices and production costs expected to hamper economic growth in the second half this year.

"The export sector is likely to be the only engine to drive the Thai economy this year," he said.

"We expect exports to grow by 6-8% this year after a robust expansion of almost 15% in the first quarter."

According to Mr Sanan, the Commerce Ministry needs to speed up talks on free trade agreements and deepen trade partnerships with potential partners to expand the sector.

With domestic spending weakening because of higher product prices, he said the government needs to roll out additional economic stimulus measures, particularly the extension of the "Khon La Khrueng" co-payment subsidy scheme.

He said the government is estimated to spend about 45 billion baht if it hands out 1,500 baht per person to 30 million eligible recipients during a fifth phase of the co-payment subsidy scheme.

The scheme's extension would help generate combined spending valued at 90 billion baht for the economy, expanding GDP growth by 0.63-0.65 percentage points to more than 3% this year, said Mr Sanan.

Business leaders are also urging the government to scrap the Thailand Pass registration requirement for foreign travellers as soon as possible, in addition to announcing Covid-19 as endemic before the Public Health Ministry's target date of July 1.

He said ease of travel is an important factor to boost tourism in the country and increase income for locals.

Thailand should be more actively promoted as the regional headquarters of multinational companies, he said, as this will help increase employment and upgrade Thailand's human resources.

As part of the global economy, Thailand must adapt to volatility, uncertainty, complexity and ambiguity (VUCA), which challenge growth worldwide, said Kriengkrai Thiennukul, chairman of the Federation of Thai Industries (FTI).

Among the uncertainties is the impact of the Russia-Ukraine war, which pushed up global oil prices, increased costs of some raw materials and caused a raw material shortage.

Mr Kriengkrai said the Covid-19 impact, which caused a Thai economic slump in 2020, remains volatile as China implemented lockdown measures under its zero-Covid policy to curb the spread in Shanghai and parts of Beijing, leading to concern over the impact on global supply chains.

China is referred to as the "factory of the world," so if its economy is disrupted by the pandemic, other countries will also be affected.

These factors need to be considered by both the Thai government and the business sector when determining an economic strategy, he said.

Covid-19 may ease off and become endemic in the future, but this does not mean the world will not encounter new serious risks, he said, pointing to climate change.

Changes in weather patterns can lead to droughts and floods, dealing a heavy blow to the Thai economy, said Mr Kriengkrai.

The country is struggling against the impact of higher inflation, which is expected to stand between 3.5% and 5.5% this year, he said, citing the latest projection of the Joint Standing Committee on Commerce, Industry and Banking.

Mr Kriengkrai wants the government to carefully control domestic diesel prices because they are a major factor in operation costs for various businesses, including transport and logistics.

Businesses also need to monitor uncertainties in the financial sector after the US Federal Reserve decided to increase the benchmark interest rate by 0.5%, the biggest increase since 2000, the FTI warned earlier.

In the short term, the increase is expected to lead to a rise in the US dollar's value against the baht, benefiting the export sector.

In the long term, if the Bank of Thailand's Monetary Policy Committee decides to increase its policy rate, now capped at 0.5%, borrowing costs would increase, which would affect businesses.

Piti Tantakasem, a board member of the Thai Bankers' Association, said Thailand has to keep interest rates at a low level while preventing the baht from too much depreciation.

If the domestic interest rate rises, it will become a third storm worsening the high household debt situation, he said.

Mr Piti said the high inflation rate is the pressing issue now and the government should help ease the inflationary impact for low-income earners.

If needed, the government should borrow more to alleviate the inflation impact, he said.

Kanit Sangsubhan, secretary-general of the EEC Office, said the flagship Eastern Economic Corridor (EEC) remains a main scheme the government hopes can get the country through tough times to drive the economy.

The government is encouraging local and foreign businesses to invest in the EEC area, which is projected to develop into a high-tech industrial hub.

Mr Kanit said he believes the EEC will be a key economic engine to boost the economy and help it recover from the pandemic and the impact of the Russia-Ukraine war.

Ongoing infrastructure development in the corridor is expected to draw investors to the EEC zone, he said.

Over the past four years, the government and investors spent a total of 1.6 trillion baht developing facilities and new business projects there.

Consumer sentiment plunged for the fourth straight month in April, hitting the lowest level in eight months, as consumers remained…

Bangkok Post
Explainer: Should we be concerned about the baht?

Thailand started off this week with the baht weakening to a five-year low of 34.62 against the greenback. While in…