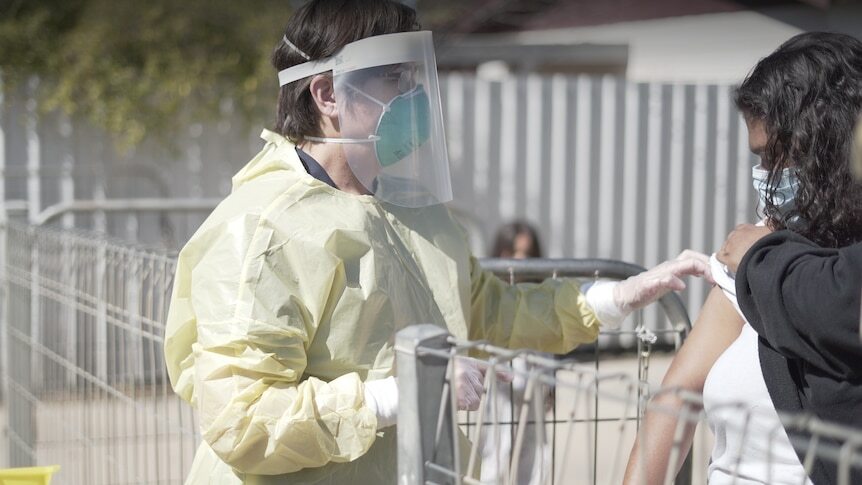 Another Aboriginal person has died from COVID-19 in Western New South Wales as the state government ploughs ahead with reopening plans despite a shortfall in Indigenous vaccination rates.

The man is the 13th person to die in the region's outbreak.

The man, who was in his 50s, died at Wellington Hospital after being transferred there by ambulance.

"He had contracted COVID-19 days after receiving the second vaccination and didn't have the full protection," Mr McLachlan said.

Another six cases were recorded in the western region during the latest reporting period, with a seventh to be confirmed.

Two of the new infections are in Dubbo, three are at Bourke and one is in Wellington.

The LHD says there is also a possible case at Walgett and a specialist public health team is investigating to confirm whether it is a positive result.

The state hit 70 per cent double dose coverage late Wednesday, but federal department data shows not all areas are protected at the same level.

Even so, some restrictions are set to be lifted from Monday.

In Western NSW, Aboriginal people made up a disproportionate number of the region's cases and deaths.

Epidemiologist Jason Agostino from the National Aboriginal Community Controlled Health Organisation (NACCHO) said the Delta strain had been disastrous for some Indigenous communities.

While the Western outbreak has cooled considerably, it remains the country's worst regional outbreak and sparked a vaccination blitz and a statewide lockdown.

The Australian Defence Force rolled out travelling mobile clinics and the Royal Flying Doctor Service was flown in to administer jabs in isolated Indigenous committees.

Despite that, 52.3 per cent of Indigenous people aged 15 and over are fully vaccinated in the Central West.

Almost 68 per cent per cent of the region's entire population is fully vaccinated.

In the Far West and Orana region more than 71 per cent of the general population is fully protected, but the Aboriginal population sits around 56 per cent.

When asked in late August if it was appropriate to open up the state if  "priority" groups remained behind the rest of the population, former premier Gladys Berejiklian said there was "no reason why anybody over a certain age should not have got the vaccine"and cited the redistribution to vulnerable communities.

Confidence target will be met

Dr Agostino said he was confident the vaccination rate would continue to climb rapidly despite the lag.

First dose rates in the two regions among the Indigenous population sits at about 75 per cent, but there is a clear difference among some age groups.

More than 85 per cent of people over 50 have received one dose.

He said the reasons for the lag were "complex" and included misinformation from "fringe groups" along with an "understandable" mistrust of government.

But he is confident the Indigenous community will hit the 80 per cent coverage rate by the end of October.

In places where there have been significant outbreaks, including the ACT, Victoria and NSW, the vaccination rates are significantly higher than states that have managed to keep the virus at bay.

"People need to talk to communities, understand their concerns, listen to them and address them," he said.

New cases, but no lockdown

Stay-at-home orders have been extended in Oberon until Monday October 11 due to the potential risk of further community transmission.

This contrasts with Orange, which has not been put back into lockdown despite recording three cases on Wednesday.

"We've viewed that as not being high-risk to the Orange community, but nonetheless there are venues of concern that have been highlighted as casual contact locations," Mr McLachlan said.

He says he is confident the region is well prepared for any rise in case numbers when restrictions start to ease next week.

"We've got a hell of a lot of things in place that have served us well over the last couple of months," he said.

"The most crucial thing that will protect us all is everyone being pragmatic about how we behave and react when Monday comes, when things change, restrictions get released."