Heavy lifting at Sydney’s herbarium: the quest to move and catalogue more than 1m plant specimens 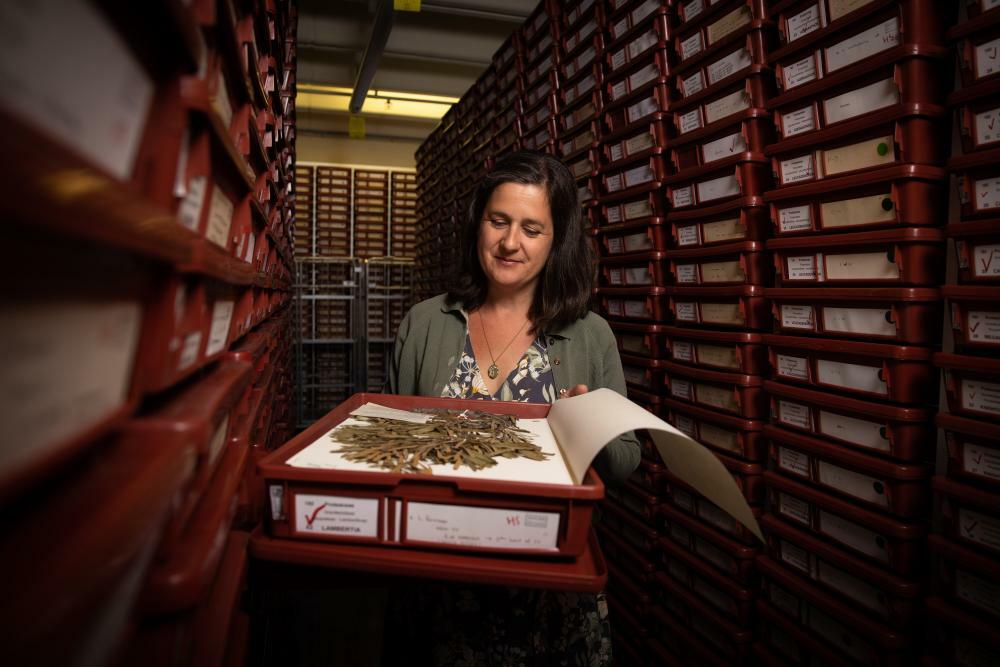 Outside the Australian Botanic Garden Mount Annan in south-western Sydney are four shipping containers with freezers inside.

Over the next six months, more than a million plant specimens will be cycled through the containers, each spending about a week in the cold to rid them of any insects.

It’s an important step in a large operation to relocate the National Herbarium of New South Wales from the Royal Botanic Garden in Sydney to a new facility at the Mount Annan site.

Once inside, the collection will be moved into vaults that have been cleaned and fumigated and are temperature-controlled at 16C with 45% to 50% relative humidity to prevent insect infestations and mould.

“Just about any plant you get growing in the bush is probably represented in our collection,” says Hannah McPherson, the herbarium’s collections manager. “We have really iconic Australian plants like wattle, eucalyptus and Sturt’s desert pea.

“And then there are more difficult-to-manage things like cactus and stinging trees and palms that we have to house in a different way by hanging them in lockers.”

The relocation will mark the end point for another project that will make the herbarium – which is not physically open to the public – much more accessible to researchers and the broader community.

For nearly three years, staff and volunteers have been going through about 70,000 boxes in a mammoth undertaking to digitise the herbarium’s collection.

It’s the largest mass digitisation of a natural history collection undertaken in the southern hemisphere and by the time it is completed there will be a digital record of 99% of the specimens the herbarium holds.

The process has allowed staff to do something that had never occurred at the herbarium before. They’ve looked at every specimen the facility holds, auditing the entire collection, which covers Australian and global locations and dates back to samples taken in the 1700s.

“Something that most people don’t know is that institutions like this one don’t know everything they have,” says the herbarium’s digitisation manager, Andre Badiou.

“The Royal Botanic Garden is now the longest-running scientific institution in Australia. If you’ve got things that have been collected since that time, things get put away in boxes.

“There are also other [facilities] that close down and send us their collections. It’s just not possible to keep up with that kind of input. So after a couple of years, you’ve lost track of everything you have.”

To digitise the collection, every specimen was given a QR code and put on a conveyor belt that had cameras at the mid and end points.

Sensors would read the label, images were taken and auto-cropped and the specimen was then packed into a trolley. Each specimen spent about two seconds in front of the camera.

“You’re getting about 4,000 images a day going through,” Badiou says. “You can imagine just with a camera if you had a million plants to take photos of it would take forever.”

The images were sent to the Netherlands-based digitisation company Picturae, which created different file types, some for internal use at the herbarium and others that are being uploaded to Amazon Web Services for scientists and the public to access.

Alembo, a specialised transcription service based in Suriname, has also been working with herbarium staff to transcribe handwritten labels into digital records.

Eventually, every specimen will end up on the Atlas of Living Australia and infrastructure is in development to make the whole collection more searchable.

Through the course of the audit, items were discovered that herbarium staff had not realised were in their possession.

These include two specimens that pre-date the herbarium’s existing special collection of 824 specimens Joseph Banks and Daniel Solander collected in Australia in 1770.

One of them is a snowberry, or Gaultheria antipoda, collected in 1769 in New Zealand. The other is Parietaria debilis, a herb native to Australia and New Zealand that Joseph Banks and Daniel Solander collected the same year from Tolaga, Opuragi and Motuaro.

They will be added to the special collections vault at the new state-of-the-art building at Mount Annan.

It has resulted in a doubling of the herbarium’s illustration library, which is also being digitised and will remain at the Royal Botanic Gardens Sydney.

Most of the specimens the herbarium holds were collected by botanists.

Older samples are markers of colonialism and the white, male field it was for a long time, Badiou says.

There are also samples collected by gardeners, bushwalkers and farmers trying to identify plants on their properties, or orchid collectors who travel the world just to see one particular plant.

Badiou says one particularly important collection is from a woman who followed her husband to remote Western Australia. She collected, dried and wrote about plant life on a property in a part of the country that is not represented anywhere else in the more than 1 million specimens.

About 8,000 new items are added to the herbarium each year.

The specimens are used for ecology, evolutionary studies, botanical consulting, artworks and bush regeneration. McPherson recently gave a talk to a group of poets using the specimens for inspiration.

There are narcotic plants, such as opium poppies, which are kept under lock and key, and the site runs an identification service that is often called upon to identify items in criminal or poisoning cases.

McPherson says anything related to looking after the environment also ends up coming back to the specimens in some way. The completed digitisation project will open the herbarium up on a scale that hasn’t been possible previously, she says.

“Often people think of a herbarium like a museum, they keep lots of old stuff in there,” she says. “But for us as scientists we think of it as an active research collection because those old specimens are still just as relevant as the ones collected today.

The herbarium is part of a global lending and borrowing network that involves sending physical specimens to facilities all over the world for scientific research.

The new images are of such high quality that researchers may no longer need to work with the actual physical specimen.

“The point of the herbarium specimen is not just to be a plant in a collection, it’s a plant that represents a time and a place,” McPherson says. “We don’t just learn about that plant but a whole landscape and that landscape through time.”

That includes looking at how a landscape has changed, how human activities have changed and reduced plant populations, and how the climate crisis is affecting plants – all the way down to leaf shape.

“We could do that to an extent before but now there is just so much more we can do that will help us with our science,” she says.