Green groups blast government for decision that could affect porpoises 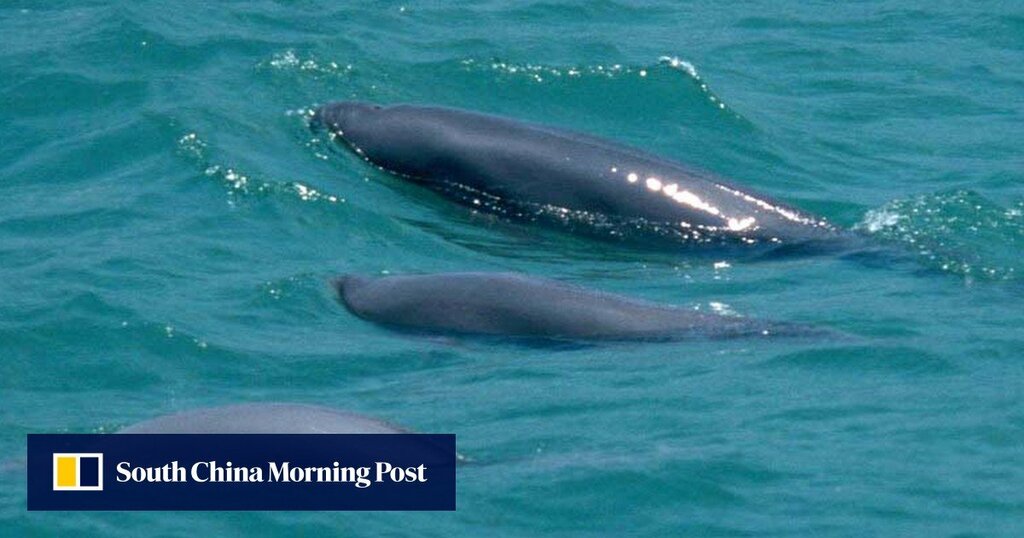 Environmental groups have criticised a government decision to remove protections for vulnerable finless porpoises, allowing underwater cable installation near their main marine habitat during their most active season in Hong Kong.

The government is in the process of building a controversial HK$31 billion waste incinerator on a reclaimed island off the coast of Shek Kwu Chau, south of Lantau Island.

Nearby waters are important for the Indo-Pacific finless porpoise, which has been classed as “vulnerable” on the International Union for Conservation of Nature’s Red List of Threatened Species.

“Given that the porpoise is a very shy and sensitive animal, even when the construction vessels are not emitting sounds within [their] hearing range … the boats can actually scare the animal away,” Doris Woo Ka-yi, of WWF-Hong Kong, said.

An environmental impact assessment (EIA) on the incinerator’s proposed site anticipated that the porpoises would be disturbed if the work went ahead, but predicted mitigation measures would keep any adverse impacts to an “acceptable level”.

One of the measures was to avoid installing submarine cables between December and May to minimise disturbances to the porpoises during these months. Sightings of the marine mammals were most common then, and the construction work could prevent them from feeding and scare them away, conservationists said.

However, CLP Power Hong Kong applied for a variation of an environmental permit to relocate the landing point of the cables between Shek Kwu Chau and Cheung Sha, to avoid affecting the natural rocky shore, which removes the restriction on installation works only being allowed between June and November.

Woo criticised the government for approving the plan in May last year without public consultation.

“If there’s any change of the environmental permit that is unfavourable to conserving the environment, we can’t really express our objections against that,” she said.

Although public consultation is not required for a variation of an environmental permit application, Woo feared such changes would set a precedent for other projects to disregard mitigation measures outlined in the EIA.

“We feel that the project proponent would use this kind of loophole to write a very perfect EIA, but then revise the environmental permit to not adhere to too many marine conservation requirements or implement the promised measures stated in the EIA,” she said.

Woo urged the government to set up a public consultation period for applications to change environmental permits and make the process more transparent.

In its application, CLP Power justified the removal of the construction limits, saying a study on the noise emitted during submarine cable installation works showed it had a frequency much lower than the range used by porpoises for foraging and communication.

The Environmental Protection Department said CLP Power’s proposal would avoid affecting the natural rocky shore, intertidal and subtidal habitats and backshore vegetated areas at the original landing site, and provided evidence that showed the noise generated from the cable installation “would not affect” the porpoises.

But Viena Mak Hei-man, vice-chairwoman of the Hong Kong Dolphin Conservation Society, said removing the restriction could spell “disaster” for the mammals.

“The proponent may claim that this cable lining work is very minor, that it may not create much noise and the boats are very slow, but just a little noise could be damaging for the finless porpoise,” she said.

If China’s finless porpoise is doomed, so is the mighty Yangtze River on which it depends

Mak noted there was a significant drop in porpoise sightings from March 1 to 9 in 2018, when there began to be an increase in vessels and activities associated with site preparation works in the inshore waters of Shek Kwu Chau.

Between 2020 and 2021, government surveyors sighted the porpoises 226 times mostly in waters off southeast and southwest Lantau. This compares with 269 sightings from 2018 to 2019, and 294 the previous monitoring year.

The main mitigation measure proposed in the EIA was the creation of a 700 hectare Southwest Lantau Marine Park to compensate for 31 hectares of permanent habitat loss, but Mak doubted it would help.

She pointed out that two marine parks were established for vulnerable Chinese white dolphins north of Lantau, but since the construction of the Hong Kong-Zhuhai Macau Bridge started in 2012, the dolphins had largely disappeared from the area and moved southwest.

A lawsuit opposing the Shek Kwu Chau incinerator, filed by a Cheung Chau resident arguing potential environmental impact, has delayed the scheduled date of completion from 2022 to 2024.

A CLP spokeswoman said the company met representatives of local green groups and community leaders early last year to get their views on the proposed changes and mitigation measures before applying for a variation of an environmental permit.

Since the new cable landing point is within the boundary of Cheung Sha Beach, CLP Power was required to schedule construction works between November and March to avoid the typhoon season and affecting swimmers, the company said.

“We are aware that it will inevitably overlap partly with the peak season of finless porpoise occurrence [December to May] in the vicinity,” the spokeswoman said.

She added that the company would adopt mitigation measures to minimise the impact on the marine mammals, including carrying out cable installation works at Shek Kwu Chau in November, and stopping works if any porpoises were spotted in an “observation zone” set up within a radius of 250 metres from the operation vessels.

If no objections over the proposal to install the submarine cables are received before the end of the month, the project will be approved by the government.

The cable installation is expected to begin in late 2023 and be completed in early 2024.

In a reply to the Post, the Environmental Protection Department said the revised cable routing would reduce potential ecological impact on the original landing site, and “agreed” that noise generated from the cable installation would not adversely affect the porpoises.

“In effect, the revised proposal is more environmentally friendly compared with the original proposal,” a department spokeswoman said.