Girl, 10, in wheelchair kicked off bus in the rain because driver 'was on overtime' 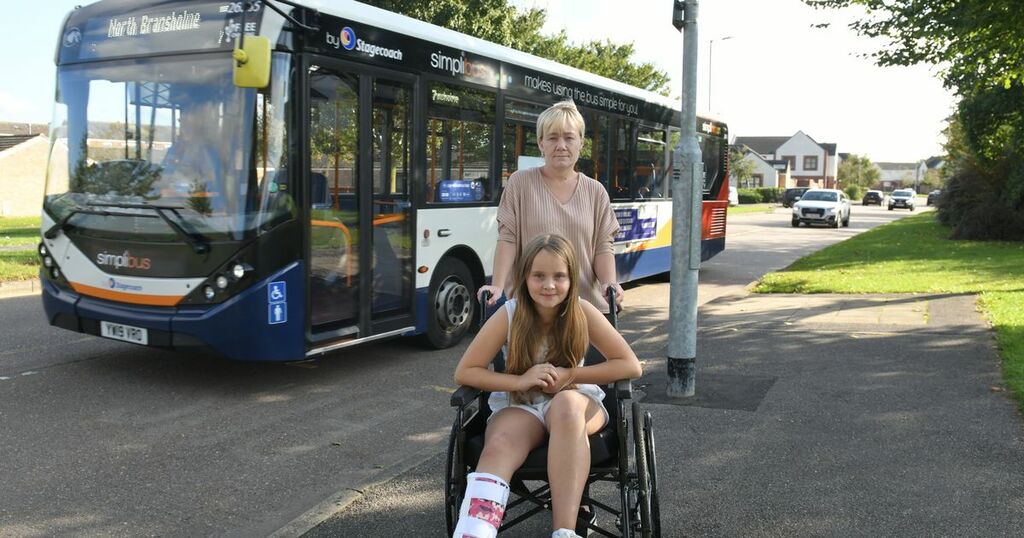 A young girl in a wheelchair and her carer mum were turfed onto the road in the rain after a bus driver allegedly told passengers she had done enough overtime.

Stranded Denise Neadley and her daughter Kassadi got drenched after suddenly being told to leave the vehicle in Bransholme, Hull, on Tuesday night.

They claim the bus was stopped in the middle of the town - a half-an-hour walk to the nearest bus-stop, HullLive reports.

The Stagecoach driver told them all to get off as she 'had worked five hours overtime' - and that a replacement driver was not being called for.

They were left with the choice of facing a long, wet trek to get to another bus stop or to call a friend for help.

Fortunately for the pair, a next-door neighbour was able to come into the town centre and collect them.

Mum Denise said: "She stopped the bus in Bransholme centre itself.

"Then she rang her boss and we could hear her having a go at her boss, saying 'I'm over my time now, I'm going to have to let everybody off the bus if you don't send another driver down here, because I've done five hours overtime'.

"She was basically shouting down the bus that her boss, who was on the phone at the time to her, and she said 'my boss has just said to me that we have to vacate the bus because they're not sending another driver out'.

"She said, 'Well, I'm sorry about that, but I'm over my hours and you have to vacate the bus, because my boss is not going to send another driver out to replace me.'

"My daughter was very anxious. She was cold and tired. And there was also no heating on the bus, either."

Speaking to the BBC on Tuesday, Ben Gilligan of East Yorkshire buses said of their current driver shortage: "We have a lot of interviews going on at the moment and driving assessments.

"But we do expect, certainly between now and Christmas, we don't think we'll be able to run a full service, but we will be expecting that we can run our temporary reduced timetables."

The bus driver shortages have become a hot political issue in the East Riding of Yorkshire.

"The council needs to take a clear lead in tackling the current bus service problems and holding our transport partners to account on behalf of our residents," Councillor Healy added.

A spokesperson for Stagecoach East Midlands said: "We are very sorry to hear about the problems that Denise and Kassadi experienced when travelling with us.

"We pride ourselves on delivering a good service to our local communities, particularly those who require additional support, and we are sorry this didn't happen this time.

"Severe road congestion earlier on in the day meant that services were running late. There is a legal limit on the driving time that individual drivers can undertake over a given period and in this case, this impacted on this specific journey and the driver was legally unable to take the bus any further.

"However, there were another two buses due within 20 minutes at the same bus stop that could have allowed Denise and Kassadi to complete their journey.

"We're very sorry for the upset and inconvenience that this has caused and we will be in touch with the family to pass on our apologies. We are also following up internally."