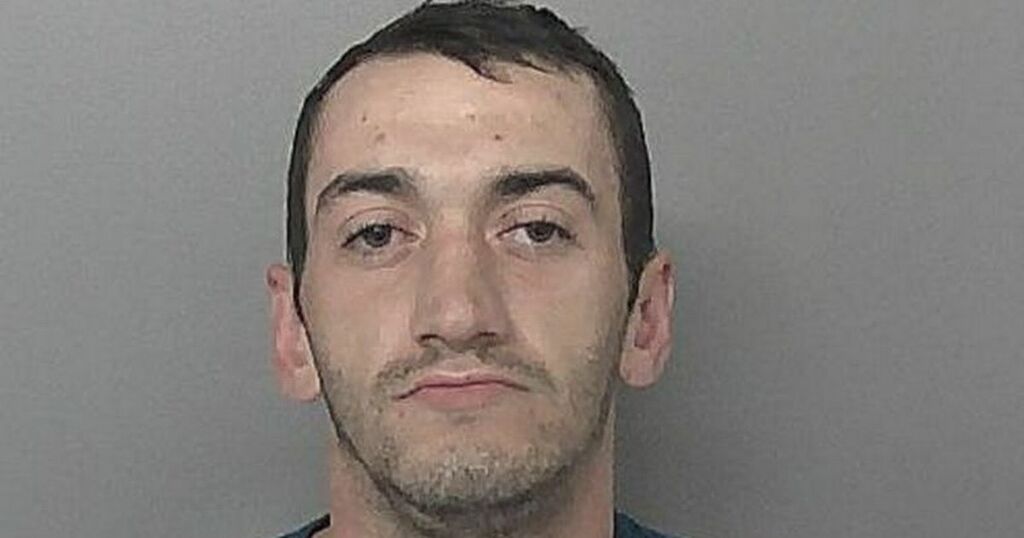 A terrified child had to call the police after his mother was brutally attacked by a vicious thug in front of him and his sibling.

Louis Coult arrived at the woman's home around 3am before carrying out the "nasty" assault, during which he grabbed her neck and took hold of her hair.

Coult, who had been heavily drinking, also shouted abuse and hit her head against the stairs whilst her petrified children watched on, Hull Crown Court heard.

The woman's son begged the 31-year-old to get off of his mother and pleaded with him to leave after ignoring her screams.

Michael Masson, prosecuting, said that Coult went to the woman's home in Escourt Street, Hull, at 3am on August 16 and banged on the door while she was in bed.

She at first thought that it might be her brother but discovered that it was Coult.

He was abusive and called her a "slag" before refusing to leave and saying that he was going to take bedroom furniture.

Coult pushed the woman on the shoulders and put his hands around her neck.

"Her son asked him to get off his mum," said Mr Masson.

She asked him to leave but Coult ignored that.

"She asked her son to ask him to leave," added Mr Masson.

But Coult grabbed her by her hair and smashed her head against a kitchen cupboard.

"He continued to call her names in front of the children," said Mr Masson.

"He grabbed the complainant's head again and banged her head against the stairs in front of her children," said Mr Masson.

Mark Savage, mitigating, said that alcohol had been Coult's downfall but he had sought help while in custody.

"He realises quite simply that his behaviour is out of control," said Mr Savage.

Judge Mark Bury told Coult: "You clearly have an issue with anger management and alcohol.

"This is intolerable behaviour. This is in this lady's home in front of her children when you have a record for doing it before."

Coult was jailed for 20 months and was given a five-year restraining order.