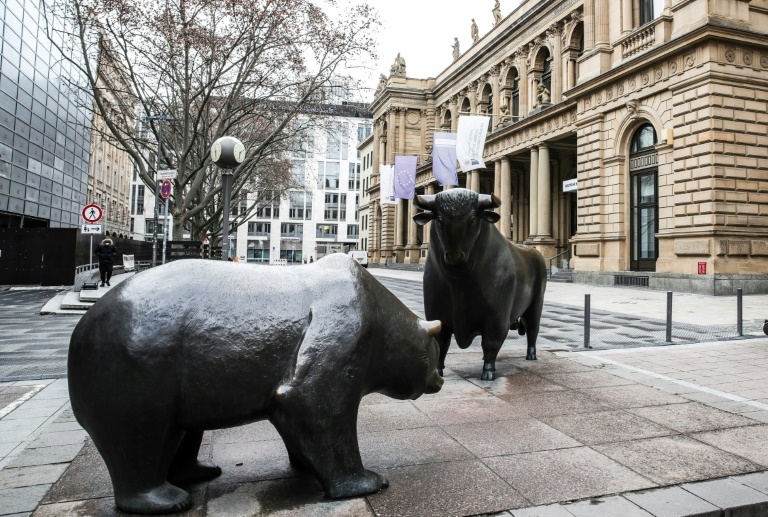 Bitcoin hit a mid-May peak at $52,921 in Asian trade, as El Salvador became the first country in the world to accept the virtual unit as legal tender.However, it lapsed into negative territory in European deals.

Oil meanwhile sank after Saudi Aramco cut selling prices to Asia, while the dollar was mixed.

"After a weak US jobs report last Friday prompted speculation the Fed would hold off on tapering support for the economy, attention will switch to the ECB as it unveils its latest decision on monetary policy," said AJ Bell analyst Russ Mould.

Wall Street opened mixed as US traders returned from a three-day holiday weekend, with the Dow slipping 0.2 percent.

Asian markets rose Tuesday, extending recent gains on optimism about the global outlook, though rising Delta coronavirus cases and worries about a slowdown in the economic recovery continue to cast a shadow.

Tokyo's Nikkei 225 briefly broke 30,000 for the first time in five months on growing expectations for a fresh injection of stimulus after Japan's prime minister said he would step aside.

Traders were also cheered by a better-than-forecast reading on Chinese exports and imports.

The blockbuster growth that characterised the start of the year has tailed off in recent months as the Delta variant sends new infections spiking around the world, tempering consumer spending and forcing some countries to impose strict containment measures.

However, several markets have continued to press to new records or multi-year highs owing to the ultra-loose monetary policies of central banks around the world -- particularly the US Federal Reserve -- that kept borrowing costs down.

While there is a general expectation that this largesse will come to an end soon as economies emerge from the pandemic crisis, officials have indicated they are in no rush to taper just yet as they track the impact of Delta.