‘Euphoria’ Season 2, Episode 1 Recap: A House Party To Die For 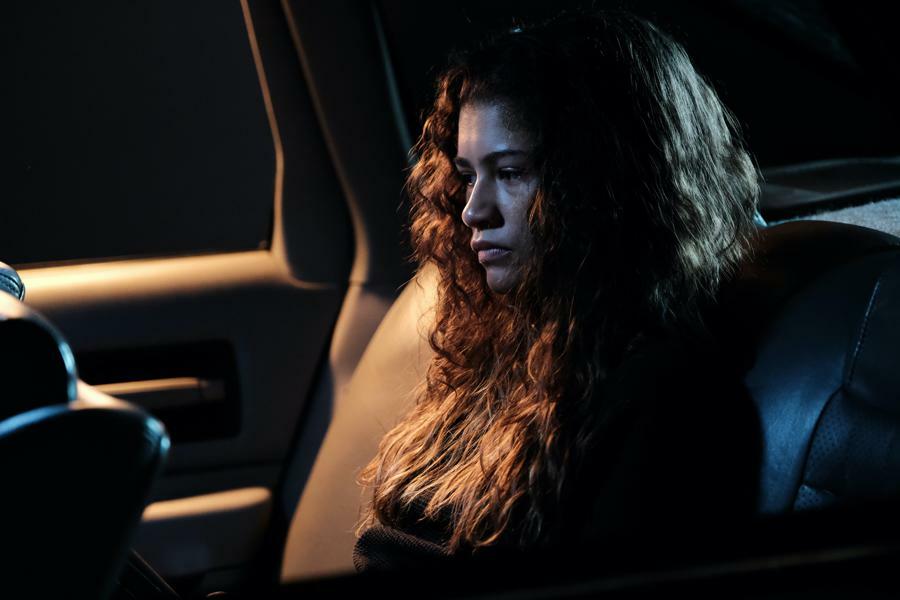 It’s been a long wait, but HBO’s Euphoria finally returned for its second season, opening with a dramatic introduction to Fez’s grandmother, the violent, drug-dealing matriarch who saved Fez from his abusive father, raising him the only way she knew how.

Grandma Fez speeds off with young Fez, and doesn’t waste time teaching him the art of the (drug) deal, eventually picking up a little brother, Ashtray, whose mother left him as collateral and never bothered coming back.

While Grandma Fez can hardly be called a positive role model, or a responsible caretaker (Ashtray is named for his penchant for tasting cigarette butts as a baby), she seems to love the boys, in her own way, and the two brothers form a tight bond, despite being surrounded by depravity and squalor.

Fast-forward to today, and Ashtray spontaneously murders Fez’s incredibly aggressive drug dealer and his acquaintance with a hammer, in an act of brotherly love. Hence, Fez, Ash, and Rue pay a visit to the dealer above that slain dealer, to work out a new arrangement.

Funnily enough, Euphoria’s drug dealer scenes are so over-the-top, almost like Grand Theft Auto cutscenes, that they almost come across as a little silly. The gang is forced to strip naked, at the behest of a roided-out, perpetually furious thug (to prove that no one is wearing a wire), while the head honcho, a former school teacher named Laurie, decides whether or not she can trust them.

After they make it back to their car unscathed, Rue seems to have found the experience exhilarating; for her, the pounding adrenaline feels almost as good as getting high. Rue also managed to snatch a little box of heroin, although she doesn’t seem interested in injecting herself - yet.

The gang arrives at a house party, where Rue quickly sniffs out some cocaine, bonding with another intoxicant enthusiastic, Elliott, and has a little overdose, only to be soothed by Adderall, the chemicals in her body dissolving into a stable combination, somehow.

Maddie, Kat, and Jules arrive at the party, only to be told by Lexi that she can’t find her sister, Cassie, and she’s starting to worry. Turns out, Cassie is already at the party and is having a frantic sex session in the bathroom, having been discovered at a gas station by hulking sociopath Nate, who offered to drive her to the party.

The short, simple scene inside Nate’s car feels tenser than all those drug-dealing scenes put together, as Nate gulps down an excessive amount of beer and steadily increases his speed, to a life-threatening degree, while Cassie shifts between feeling deeply unsafe, and turned on.

The two are interrupted in the act of coitus when Maddie bangs on the bathroom door, desperate to pee, prompting panic in Cassie, who really doesn’t want to be discovered having sex with Maddie’s abusive ex, being her best friend and all.

It’s another intense scene, as Maddie knocks grow more frantic, as she loudly “accuses” Nate of taking a dump, as though human bodily functions should cease to exist during house parties.

The scene plays almost like a slasher film, Maddie being the killer at the door, promising bloodshed if she breaks in and discovers the juicy betrayal.

Desperate, Nate convinces Cassie to lie flat in the bath and closes the shower curtain, allowing Maddie to enter without suspicion. For her trouble, Cassie receives a urine-soaked towel in the face, carelessly thrown by Maddie, and is forced to remain in the bathtub while Maddie graciously endures some flirting from Travis, a smooth, confident partygoer armed with a strong joint.

Cassie is eventually discovered by Travis, after her phone vibrates, flooded with calls from her concerned sister, but Maddie doesn’t even bother to look; she doesn’t give a damn about a drunk girl in the bathtub - her only aim is to dance with Travis and, hopefully, make Nate jealous.

Obviously, she succeeds - Nate is seething, riddled with insecurity, desperate to possess both Maddie and Cassie, now overflowing with an abundance of alcohol and testosterone.

After Cassie discusses the state of her relationship with McKay (and both decide that it is well and truly over), Nate anxiously pressures McKay for sordid details about what he did while alone with Cassie in the bedroom.

It’s an incredibly uncomfortable scene, as Nate pulses with menace, every drunken breath seemingly slipping closer to violence - he really is a fantastic villain, always concealing a burning, overwhelming rage, that only occasionally slips out onto the surface.

Meanwhile, Fez has been enjoying an unexpected bonding session with Lexi, as the two recognize each other as outsiders in this party of glitzy attention-seekers. Lexi is even impressed enough to take Fez’s number, but soon, something more important grabs his attention.

Last season, Nate anonymously called the police on Fez and sparked a great deal of trouble for the soft-spoken dealer. But Fez isn’t as much of a teddy bear as he seems, and the opening sequence with Grandma Fez soon proves to have foreshadowed a violent act of revenge, as Fez pretends to make peace with Nate, only beat him senseless the moment he lets his guard down.

While Nate is being brutally battered by Fez (much to Lexi’s disgust), Rue has reunited with Jules, and revealed that she relapsed the moment Jules left her. The two share a kiss, bathed in soft, golden light, and it isn’t quite clear if the romance is real, or a particularly cruel, drug-induced hallucination.

We’ll discover the consequences of this most eventful house party during the next episode - hopefully, Nate recovers from his wounds - he’s too powerful an antagonist to kill off.

Euphoria’s reintroduction is just as vibrant, beautifully shot, and gleefully tasteless as the first season, soaked in sex, violence, and pretty lights; it’s nice to have it back.