EU Leaders Seek Unity on How to Face China, US 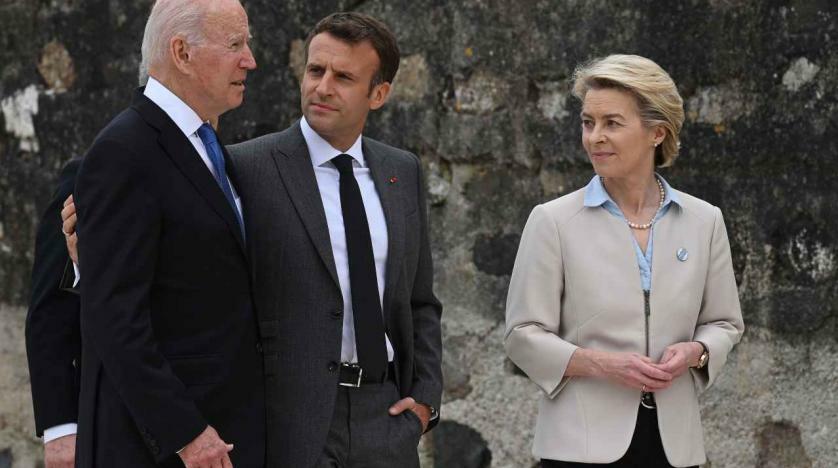 EU leaders will have a hard discussion on Europe's place in the world on Tuesday as they seek unity on how to approach ties with superpowers China and the US, reported AFP.

The 27 heads of state and government are set to converge on Brdo Castle in the former Yugoslav republic of Slovenia, the country that currently holds the EU's rotating presidency.

While no concrete outcome is expected from the meeting, "this is the first time leaders have met since June, and with everything that has happened, that seems ages ago", a senior EU diplomat said.

The dinner takes place on the eve of an EU-Western Balkans summit in which countries to the bloc's east will seek assurances on one day joining the European Union.

At the dinner, leaders will have a "strategic discussion on the role of the Union on the international stage", according to an invitation letter sent out by EU Council chief Charles Michel, the former Belgian prime minister who organizes summits.

French President Emmanuel Macron is expected to again warn his partners that Washington's close allegiance to Europe is no longer a given, with Paris still smarting over the cancellation of a massive submarine contract to the benefit of the US.

"It would be a mistake to pretend that nothing happened," said a French presidency source ahead of the talks.

France was infuriated last month when Australia cancelled a deal for French submarines worth tens of billions of dollars, saying it would pursue US nuclear versions as tensions rise with China.

EU partners have expressed solidarity with Paris to varying degrees, with Baltic and Nordic countries reluctant to criticize the Cold War superpower that they deem their ultimate protector against Russia.

The subs debacle came weeks after the US pulled out its troops after two decades of presence in Afghanistan, seeing the Taliban sweep to power and catching the Europeans off guard.

Under the auspices of NATO, the Europeans provided troops and were major donors to the overthrown Afghan regime and have warned they will not recognize the Taliban government, made up largely of hardliners and no women.

The collapse in Afghanistan -- on top of the submarine fallout -- has given fresh impetus to those pushing for the EU to develop its own military capabilities, with France leading that charge.

German Chancellor Angela Merkel, the EU's most influential leader for the past 15 years, will attend as coalition talks advance by inches in Berlin to come up with the government that will replace her.

As leader of Germany, the EU's export powerhouse, Merkel has also always encouraged close ties with China, but this has also proven harder to defend as Chinese President Xi Jinping's leadership turns more centralized and hardline.

The relationship with Beijing grew even more complicated when an EU-China investment deal wanted by Germany was put on indefinite standby after both sides exchanged tit-for-tat sanctions over the treatment of the Uyghur Muslim minority in China.

Spain will highlight more immediate concerns, calling for a bold EU answer to focus instead on the sudden rise in energy prices, with France, Greece and Poland also seeking action.

The EU Commission is expected on Tuesday to offer short-term solutions to the energy crunch, with a more in-depth discussion by leaders at a summit on October 21-22.