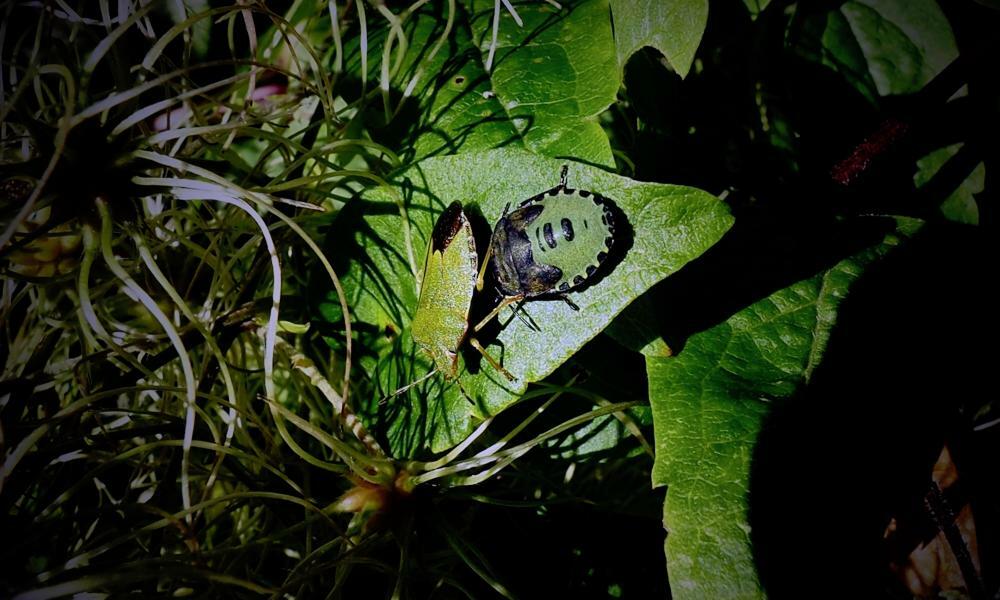 Two insects turn like compasses on a leaf of traveller’s-joy. They look very different from each other, but they are the same species – the common green shieldbug, Palomena prasina. One is more animated and moves quickly across the leaf; its head and antennae stick out of the top of its green, pitted, shield-shaped body that is broad along the pronotum at the top and pointed at its tip below. This is an adult shieldbug, an imago.

The other is more sedentary, a circular, pea-green shield with black heraldic markings; this is a nymph shieldbug, in its fifth and final instar – or stage of development – before it sheds its nymph shield to become an imago.

Although at different stages of development, the two green shieldbugs connect physically, aware of each other’s excretions of a defensive pheromone from which they get the name, stink bug. In this rare moment of autumn sunshine that galvanises the insect world with a jolt of electricity, the air must be as full of swirling chemical signals as it is wings.

The static around a clump of ivy, in full flower and in full sun, is as if the dial on insect volume has turned up to 11. Hundreds of bees, hoverflies, flies and wasps swarm around the ivy, stopping to take nectar and pollen from the flowers. A lone hornet, Vespa crabro, massive and piratical in comparison, swoops, grabs a wasp and eats it from the head down, discarding only the wings. The hornet devours the wasp in a minute, then flies away to her nest to feed the last batch of larvae in a process called trophallaxis – she regurgitates the protein-rich, chewed-up remains of the wasp for the larvae, which in turn produce a carbohydrate-rich salivary fluid for the adult hornet.

Another hunter, the common darter, Sympetrum striolatum, a long red needle of a dragonfly, comes to rest on a fencepost – the same one the spotted flycatcher used to launch from to snip gnats dancing in thin air. The darter, having left the husk of its nymph self in a pond somewhere, turns its head to the sun knowingly.