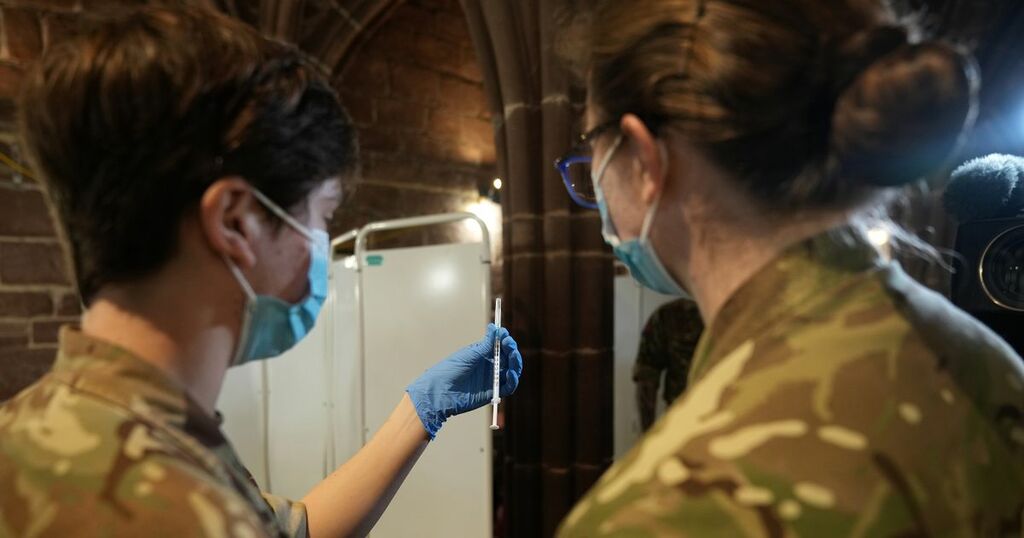 Hospitals in Greater Manchester have requested military assistance as the system braces for more pressure before the current Covid wave eases.

As patient numbers in London have shown signs of plateauing, the demand on hospitals has surpassed last year’s peak over recent days and is still rising.

NHS bosses are now in conversations with the military about assistance with ancillary support such as porter work, admin and cleaning, as staff in those fields are hit by high absence alongside their medical colleagues.

Soldiers may also be asked to provide basic care such as hydration and nutrition for those in ‘super surge’ beds - those opened up in parts of hospitals not usually used as wards, but adapted into mini-Nightingale-style step-down facilities.

The Royal Oldham, which serves one of the most deprived populations in the country, is said to be particularly struggling, as it has in previous waves of the pandemic.

Pressure is being felt mostly on beds outside of intensive care, unlike in previous waves, but the scale of the demand - which means general beds are more than 90pc full - has already seen non-urgent surgery cancelled almost across the board here, in order to free up staff.

That work is expected to remain on hold for another fortnight and managers admit hospitals may yet have to declare a ‘black alert’, known in the NHS as an OPEL 4 escalation.

Chris Brookes, acute lead for Greater Manchester and an A&E consultant at Salford Royal, says the system has been holding together so far, but while January is always extremely difficult, ‘it would be wrong for me to say it’s not more intense a pressure, because it is’.

“The word I’d use is uncomfortable. When bed occupancy is in the low to mid 90 percents, that is an uncomfortable place.”

Another senior clinician says the weekend of New Year and the first week in January were ‘particularly tough’.

“I think the NHS has responded incredibly well, but we were bracing ourselves for this,” they say.

“It has necessitated really high levels of cooperation between hospitals, and to be frank, if hospitals had functioned as ‘islands’ it wouldn’t have worked.

“That has put huge demands on staff though. We’ve not been overwhelmed but, yet again, we’ve had to ask them to go above and beyond.”

A senior Greater Manchester figure says the virus has been endemic in the conurbation for quite some time, meaning that there were hundreds of Covid patients in beds here throughout the autumn, ‘when nobody was talking about it’.

“The NHS has already been managing that,” they point out.

But with staff absence now running at up to 15pc in hospitals here, the number of Covid-positive patients is also higher than the last peak at the end of January 2021. In Manchester itself, the rolling seven-day-average is understood to be 537, compared to last January’s peak of 503 - although some of those will be infections either caught in hospital, or detected once the patient has been admitted for something else.

However that still causes disruption for hospitals, which then have to carry out infection control measures and move wards and beds around once a case or outbreak has been detected.

With pressures still mounting, the NHS here has now made a request, under the Military Aid to Civil Authorities process, for support from the army.

“Where there has been much active conversation with the military is with respect to the support they can give to our ancillary services,” says Dr Brookes.

“That’s the place the military are looking to be able to support us, or where they may have skills in terms of pharmacy and pharmacy technicians. So that’s where conversations are happening with the military and I think that’s a good thing, to minimise the impact of staffing absence.”

So-called ‘super surge’ beds are also being stood up - or could be - in parts of hospitals not normally used as wards.

Some hospitals are expanding general beds into their emergency departments, while at the Manchester Royal Infirmary, space usually used for research is also accommodating more general beds - although that would be ‘step down’ care for people broadly ready for discharge, says Dr Brookes, meaning they don’t need the intense level of care required for someone who is medically ill.

Discharge is easier said than done, however, due to the severe staffing shortages in social care.

Over the weekend more than 800 patients were stuck in hospitals in Greater Manchester, unable to be discharged, due to a lack of care home places or packages.

That amounts to effectively a hospital’s worth of people. Last week half the city region’s care homes were unable to take any more residents, due to staffing shortages.

Dr Brookes points out that while the hospital system here has been able to free up staff by pausing electives yet again - a move not without its own consequences and likely to remain the case until the third week in January, on current estimates - the care sector does not even have that option.

“That isn’t available in the social care system,” he says. “They haven’t got the ability to just turn off a stream of their work.”

Greater Manchester has not yet hit its peak for Covid patients in this wave, he says, with internal modelling - which he says has been ‘uncannily’ accurate - suggesting numbers will continue to rise.

He is unable to give an estimate for when the peak will hit, but if the national debate in recent days has tended to suggest the worst is over for the NHS, hospitals here are not in that place. (“Our current 12-hour, seven-day working week says otherwise,” points out one hospital doctor.)

Greater Manchester has not yet declared a critical incident, however, unlike some areas. Some insiders suggest that is partly due to the level of intense national NHS scrutiny that comes from such a declaration, with everything short of that move having been deployed to avoid it.

Dr Brookes insists it is because hospitals have just about managed by working together, however, sharing the pressures.

“That’s why the decision has not yet been made to declare OPEL 4,” he says. “Though, of course, that may yet be necessary.”

Where the hospital system here truly would be ‘overwhelmed’, he says, is if it had to stop work that then put people at immediate risk.

“Can we still deliver emergency surgery? Can we still maintain the diagnostic pathways for those patients, such as endoscopies? Can we deliver specialist services?

“If you can’t, that’s when the system is becoming overwhelmed,” he says.

“These are personal views, but I reckon most clinicians would say that. So we are in an extremely challenged position, yet we are not in a position where the system is overwhelmed.”

Private hospitals remain on standby should that happen.

In the meantime, Dr Brookes asks people to think carefully before attending A&E, asking them to try 111 or a pharmacy - or, if they can access them, their GP - if their issue is not urgent..

“It’s really important that people understand the emergency department is open for them,” he adds. “All I’m asking is think carefully.”