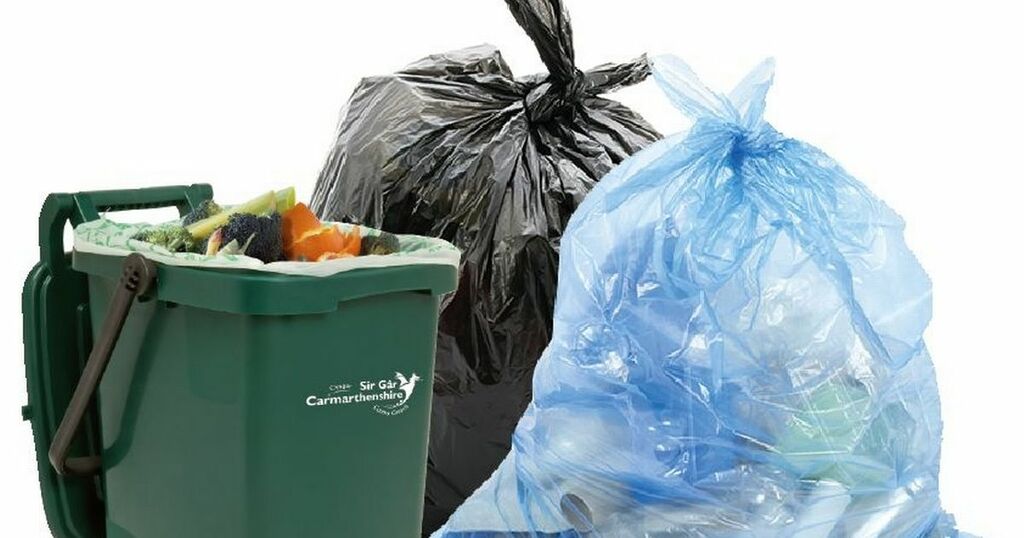 Black bin bags will be collected every three weeks from outside people's homes instead of two as part of a major overhaul of Carmarthenshire's kerbside service.

Blue bag recycling will be collected every week instead of the current two, with a new kerbside glass collection service to be launched on a three-weekly basis. Weekly scrap food collections, and the current three black bag per household limit, will remain.

Carmarthenshire Council's cabinet unanimously approved the proposals, which they expect will enable the authority to hit a 70% recycling target in three years' time.

READ MORE: Ex-soldier who died after being Tasered was ‘harassed’ by police, inquest told

The far-reaching changes will lead to a collection system in 2024 whereby residents will separate recyclable materials in different containers prior to collection.

Cabinet members heard the proposals would benefit the environment and that in-principle funding to implement them had been agreed by the Welsh Government.

Cllr Linda Evans said of recycling: "It has to be a way of life."

It was important, she said, to keep putting this message out there.

More than 4,000 people in Carmarthenshire responded to a survey about the planned kerbside changes, with 82% of respondents agreeing or strongly agreeing that weekly recycling was a necessity. The same number said their motivation for recycling was doing their bit for the environment.

But only 52% said they didn't have any concerns about three-weekly black bag collections.

A start date for the new collection system, which affect some 91,000 households, has not been finalised yet and further engagement exercises will be carried out.

Cllr Hazel Evans, cabinet member for the environment, said the current collection system was resulting in "unmanageable and unsustainable workloads".

She added that the wrong things, such as batteries, were being put in bags - and that it was batteries which had caused the fire at Nantycaws household waste recycling centre, near Carmarthen, in April this year.

Meanwhile, a 2017 study revealed found that on average 46% of what was put out in black bags in Carmarthenshire was food waste, glass and other recyclables.

Cllr David Jenkins pointed out that missing recycling targets would cost the council around £160,000 in fines for every 1% missed.

Cabinet members thanked the public for their recycling and composting efforts - the current rate is just over 64% - and said the response to the consultation had been positive.

"We need to get more people to do their bit, and educate them," he said.

The proposals were scrutinised by a council committee last week, which heard that the authority was minded to retain an exemption on the three black bag limit where there were more than six people living in a property.

The committee also heard that contaminated recycling was more likely to be sent abroad rather than being reprocessed in the UK.

Speaking at the cabinet meeting, Cllr Davies said it was becoming "increasingly difficult to identify and address contamination".