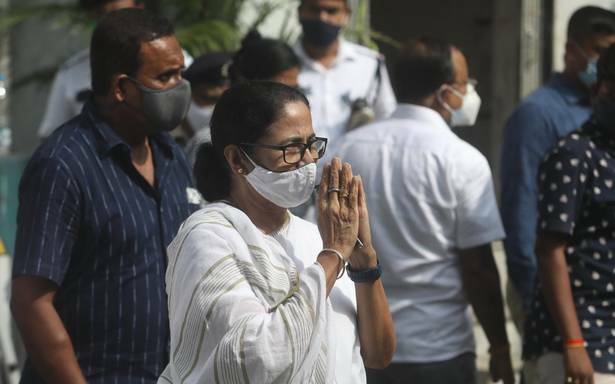 The Chief Minister had represented Bhabanipur in 2011 and 2016 and her residence falls in the constituency. Ms Banerjee has already started her campaign from the constituency that goes to polls on September 30.

The Bharatiya Janata Party during the day nominated lawyer Priyanka Tibrewal to contest against Chief Minister Mamata Banerjee at Bhabanipur. Ms. Tibrewal had represented petitioners in post poll violence case at the Calcutta High Court. The High Court has directed the CBI to probe allegations of murder and sexual assault in post poll violence in the State.

Ms. Tibrewal had contested 2021 Assembly polls from Entaly Assembly constituency in Kolkata and lost to Trinamool Congress Swarna Kamal Saha by a margin of over 50,000 votes. The Communist Party of India (Marxist) has nominated 31-year-old lawyer Shrijeeb Biswas from the Bhabanipur after the Congress refused to put any candidate against the Chief Minister.

The Chief Minister is contesting bypoll from Bhabanipur as she lost polls from Nandigram Assembly seats to BJP's Suvendu Adhikari by a margin of 1,956 votes. Ms. Banerjee has to get elected to the State Assembly within six months of Assembly polls. Trinamool Congress candidate from Bhabanipur Sobhandeb Chattopadhyay had won the seat in 2021 Assembly polls by margin of over 28,000 votes. He had resigned from the seat to make way for the Chief Minister to contest bypoll.

The BJP on Friday also announced candidates for Samserganj and Jangipur Assembly seats that are going to polls on September 30. While Milan Ghosh will contest on BJP ticket from Samserganj, Sujit Das will be BJP's nominee from Jangipur. Both the seats in Murshidabad district have significant voters from the minority community.