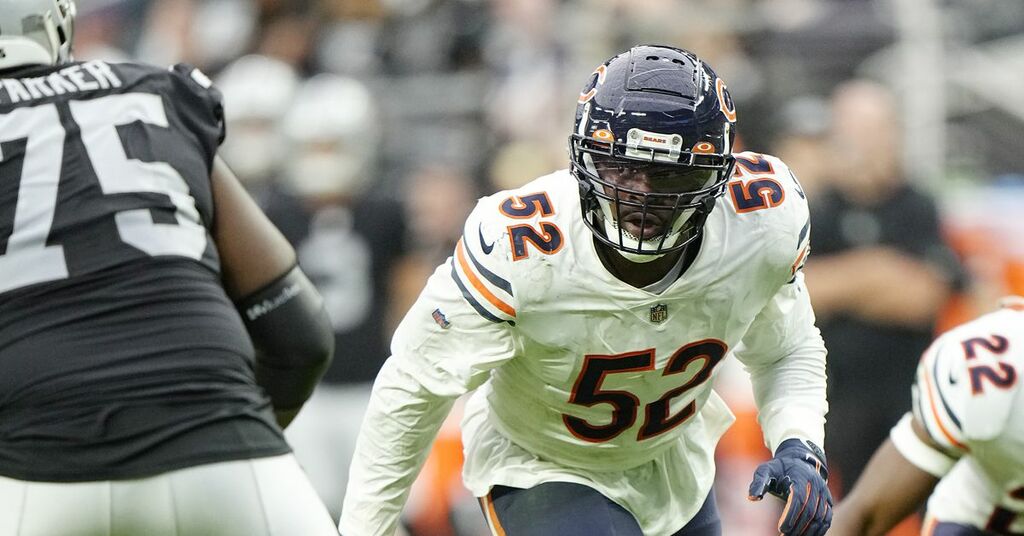 Bears star Khalil Mack made it unmistakably clear leading up to a rematch against his former team that he had a little something extra for the Raiders. And he backed that up emphatically in a 20-9 win Sunday.

Mack left footprints all over Allegiant Stadium and the Raiders’ offense on his way to at least one sack — he almost certainly will get half-credit for another one after review — as well as a sack that didn’t count toward his statistics to smash a two-point conversion try. He also had eight tackles, matching his high as a Bear.

“You could see that they knew where he was on every play,” coach Matt Nagy marveled. “And he was able to still affect the game.”

The revival of the Bears’ once-mighty pass rush has kept them among the NFL’s best defenses despite several starters in their 30s and salary-cap-driven moves in the secondary. They lead the NFL with 18 sacks, and it’s no coincidence that they’re seventh in scoring defense.

Mack and fellow outside linebacker Robert Quinn have led the pressure, with Quinn’s resurgence often creating opportunities for Mack. Mack is sixth with five sacks, and Quinn is 10th with 4.5. This is what general manager Ryan Pace envisioned when he paired them, and their success is intertwined.

“You have both those guys on the edges playing like that... and it’s a domino effect,” Nagy said. “They’re having fun with it. It’s nice when they’re out there flying around because — Robert Quinn didn’t have a bunch of stats (three tackles), but he helped out in so many different ways.”

Here’s what worked so well for that duo against the Raiders:

Mack and Quinn each had a shot at ruining the Raiders’ last drive in the first half, and Mack broke free to sack Derek Carr for an eight-yard loss on second down that left him with a nearly impossible third-and-14 from his own 21 and effectively ended the threat.

Defensive coordinator Sean Desai got creative here. He put Mack on Carr’s right and Quinn on his left, but Mack went inside as defensive tackle Angelo Blackson veered outside. That confused the Raiders’ offensive line, and in an instant Mack was unblocked. Carr had nowhere to go as Quinn worked his way around left tackle Kolton Miller and lunged at his legs, so he was a sitting duck for Mack.

It’s ironic that a sack on a two-point conversion attempt doesn’t count as a sack statistically considering it’s the biggest sack a player can make.

Mack prevented two points by dropping Carr when the Raiders went for two with 9:05 left in the hope of cutting the Bears’ lead to a field goal. Mack ripped through right tackle Brandon Parker in less than three seconds to wrap up Carr, but even if Parker had held him off, Quinn used a spin move to get by Miller and was a split-second away from leveling Carr head-on.

There was no point at which the Raiders’ offensive line had a handle on Mack. It’s surprising he didn’t have more sacks. Down 17-9 with 2:45 remaining, he fought through to take down Carr again and not only derail the Raiders’ drive from the onset, but keep the clock running.

Quinn didn’t have much to do with this one. Instead, Desai sent safety Tashaun Gipson blitzing from Mack’s side (Carr’s right), and Mack cut inside. As defensive tackles Bilal Nichols and Eddie Goldman plowed through the middle of the line, Carr tried to escape to his right, and Mack spun back outside to catch him.

Gipson got free from Raiders running back Josh Jacobs and appeared to get a hand on Carr’s leg, but Mack was the one who took him down. Gipson was credited with a solo sack in the initial game report.

The Raiders’ last chance was a fourth-and-five at their own 30-yard line with two minutes left, and the Bears’ stop was an example of what Nagy referred to when he mentioned Quinn and Mack making important plays that don’t show up in stats.

Neither of them was close to sacking Carr, but they — along with Blackson — created enough pressure to shrink the pocket and force Carr into a bad throw. It goes down as a simple incomplete pass, but it might’ve saved the game. Wide receiver Bryan Edwards beat cornerback Kindle Vildor deep and might’ve had a clear route to the end zone if Carr had hit him in stride.

Instead, Carr had to throw on the move, rushed it and overthrew Edwards by a couple feet. The Bears took over in great position, ran 54 seconds off the clock, forced the Raiders to exhaust their timeouts and sealed the win with Cairo Santos’ 46-yard field goal. That pressure was likely the difference between a potential tie game and the Bears burying the Raiders for a huge victory.