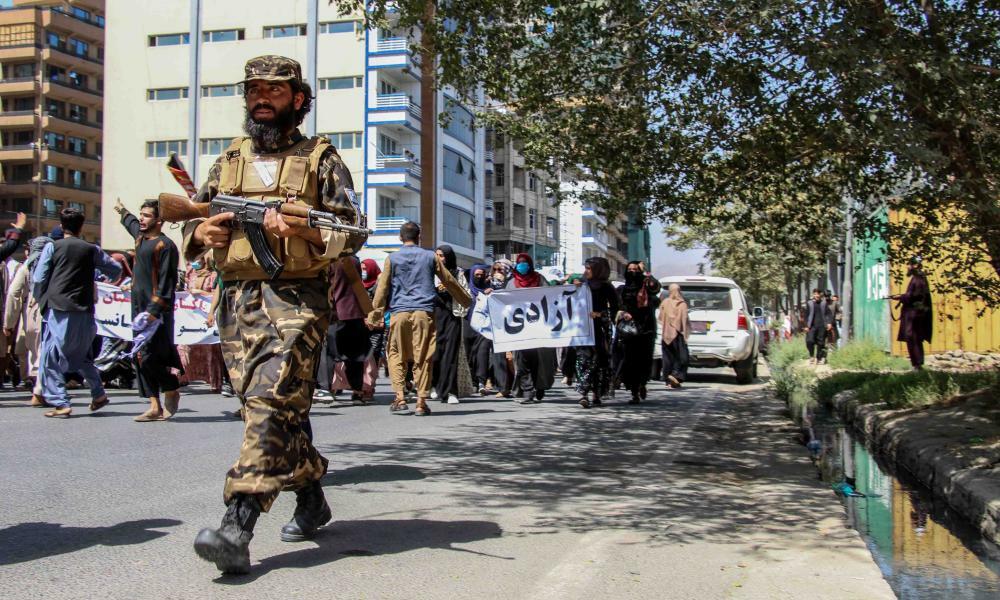 The Taliban’s violent crackdown on protests against their hardline rule has already led to four documented deaths, according to a UN human rights official who said the group had used live ammunition, whips and batons to break up demonstrations.

Ravina Shamdasani, the UN’s rights spokesperson, told a briefing in Geneva that it had also received reports of house-to-house searches for those who participated in the protests.

The protests against the Taliban’s return to power, many of which have been led by women fearful of their status under the Islamist group, have been the target of violence in a number of locations and were formally banned this week without prior authorisation by the Taliban’s new interior ministry.

Describing the crackdown on dissent as “severe”, Shamdasani also described how journalists covering the demonstrations had faced intimidation, including in one case the threat of “beheading”, apparently a reference to an incident in which two Afghan journalists were detained, flogged and threatened earlier this week.

“We have seen a reaction from the Taliban, which has unfortunately been severe,” Shamdasani said. “In one case, one journalist was reported to have been told, as he was being kicked in the head, ‘You are lucky you haven’t been beheaded’. Really there has been lots of intimidation of journalists simply trying to do their job.

“We call on the Taliban to immediately cease the use of force towards, and the arbitrary detention of, those exercising their right to peaceful assembly and the journalists covering the protests,” Shamdasani said.

The UN’s comments follow increasing concern over the deteriorating human rights environment in Afghanistan since the Taliban swept to power last month in the midst of the US-led withdrawal of foreign forces.

Despite public assurances on media freedom, women’s rights and freedom of expression, the Taliban have rapidly moved to crack down on burgeoning opposition to their return, not least demonstrations that have sprung up in a number of cities.

Earlier this week, in its first move since an interim cabinet consisting entirely of male, Pashto-speaking Taliban loyalists was appointed, the new interior ministry, led by Sirajuddin Haqqani, who is wanted in the US for terrorism, banned protests that had not been pre-authorised by the Taliban.

The UN statement adds weight to widespread reporting by media and rights monitors of serious human rights violations that have emerged since the Taliban took power, including claims of extrajudicial killings, arrests, violence, and suppression of freedom of expression and women’s rights.

With Afghanistan facing a looming humanitarian crisis, the US also reiterated on Thursday the message that help from Washington is contingent on the Taliban’s caretaker government living up to its previously voiced commitments to stability for Afghanistan and the region, and demonstrating widespread inclusion.

The US deputy ambassador, Jeffrey DeLaurentis, speaking at the UN security council on Thursday, stressed the US position once again that “any legitimacy and support will have to be earned”.

He said the standards the international community had set were clear and included facilitating safe passage for Afghans and foreign nationals who wanted to leave Afghanistan and respecting the country’s obligations under international humanitarian law “including those related to the protection of civilians”.

“We’re watching closely to see that those standards are met,” he said.

DeLaurentis added: “The United States remains committed to the people of Afghanistan,” and said that, as the country’s largest humanitarian donor, it was helping partners on the ground provide assistance, “but the needs are vast”.

On Friday, the World Food Programme reported that about 93% of households in Afghanistan were not consuming sufficient food after the increase in prices that followed the Taliban’s return to power. A UN development programme appraisal the day before suggested the country could sink into almost universal poverty by next year without international help.

The UN’s concerns were voiced as evacuation flights resumed for foreigners, but thousands of at-risk Afghans who had helped the US were still stranded in their homeland with the US embassy shuttered, all American diplomats and troops gone and the Taliban in charge.

Scores of foreigners, including Americans and Britons, left Afghanistan on the commercial flight out of Kabul on Thursday with the cooperation of the Taliban.