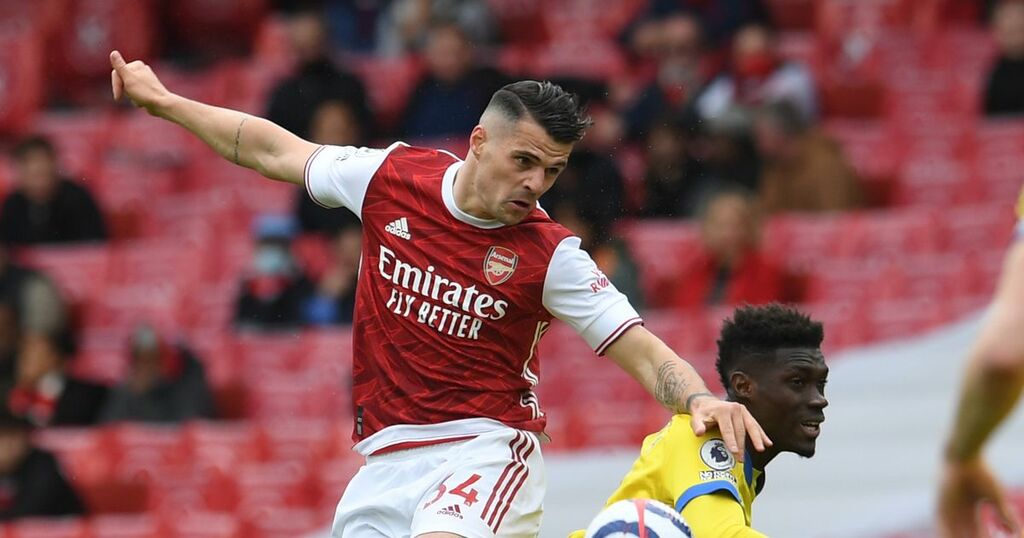 Granit Xhaka’s contract extension this season almost guarantees that Arsenal fans can expect to see him feature heavily across the next couple of seasons. However, there will come a point where the club will, seemingly reluctantly, have to move on.

The Gunners nearly found themselves moving ahead with these plans in the previous summer window. A deal between Roma and Xhaka was agreed but the Italian side failed to match Arsenal’s asking price and the Swiss midfielder stayed.

A number of players were linked with a move, in particular Sassuolo’s Manuel Locatelli who eventually signed for his dream club Juventus.

Arsenal ended the window with their midfield options light with both Xhaka suspended and Thomas Partey injured.

With some exciting talent coming through and a number of names on the club’s radar, The Arsenal Way have taken a look at the possible replacements we could see for Xhaka in the coming years.

The Brazilian midfielder was tipped to have piqued the interest of Arsenal and the club's transfer network in two previous windows.

Having come through in his native Brazil, he left the South American continent in January of 2020 when Lyon purchased him from Athletico Paranaense.

Arsenal too had been named as a party vying for his signature then and more recently during the 2021 summer window just passed. Still just 23, Arsenal could yet make a future more for the central midfielder.

Guimaraes transitioned smoothly to the European scene, whilst not the quickest, his technical ability in combination with the progressive passing he possessed saw him become a fan favourite in France.

Should Arsenal want a jack of all trades, who has the potential to become a master of just as many, then Guimaraes would continue to be a smart target for the Gunners.

Signed from Anderlecht this summer, Sambi Lokonga has impressed supporters with his displays despite Arsenal’s poor start to the season.

His two appearances in the Premier League earned him a call-up to the Belgian senior side and he made his debut in a 5-2 win over Estonia.

Still only 21, Lokonga already looks ready for life in England’s elite league and will push Granit Xhaka for a starting place throughout the current season. A partnering role with Thomas Partey is up for grabs as the reward.

To the frustration of some, Miguel Azeez was sent on loan to Portsmouth for the forthcoming season. The England youth international impressed in preseason with Arsenal leading to hope of a senior debut being granted.

The 18-year-old is known for his technical ability to take players on and drive the play forwards. He has an eye for goal with a long-range strike; shown by a shot with his weaker foot that curled into the net against Watford in the preseason.

The year at Portsmouth will be a great opportunity for Azeez to play regularly at a senior level and could return to the Gunners at a new level. Still so young, Azeez could have the potential to integrate into the senior setup in 2022 and look to usurp Xhaka from his established midfield role.

It wouldn’t be a discussion about possible midfield options for Arsenal without the inclusion of the Brighton midfielder Yves Bissouma.

On the lips of almost the entire fan base throughout the summer, it was a shock to see the Malian remain with the Seagulls past deadline day. Having just turned 25, Bissouma is now on the home stretch to his prime years and another season under his belt will only improve him further.

He will finish the season with a year remaining on his deal. Barring any renewals, Arsenal could look to take advantage of the uncertainty and strike an agreement with the athletic number 6.

Bissouma has been so craved due to his experience at the elite level, excellent defensive capabilities, and passing characteristics. He would add to the dynamism of an Arsenal midfield lacking in recovery pace on the left side.

The chances of Arsenal being alone in the chase for Bissouma though is fanciful at best.

Who do you want to see succeed Xhaka and why? Follow our new Arsenal Fan Brands Writer Tom Canton to get involved in the discussion and give us your thoughts in the comments section below.