A day like no other, 20 years on – inside Washington’s corridors of power on 9/11 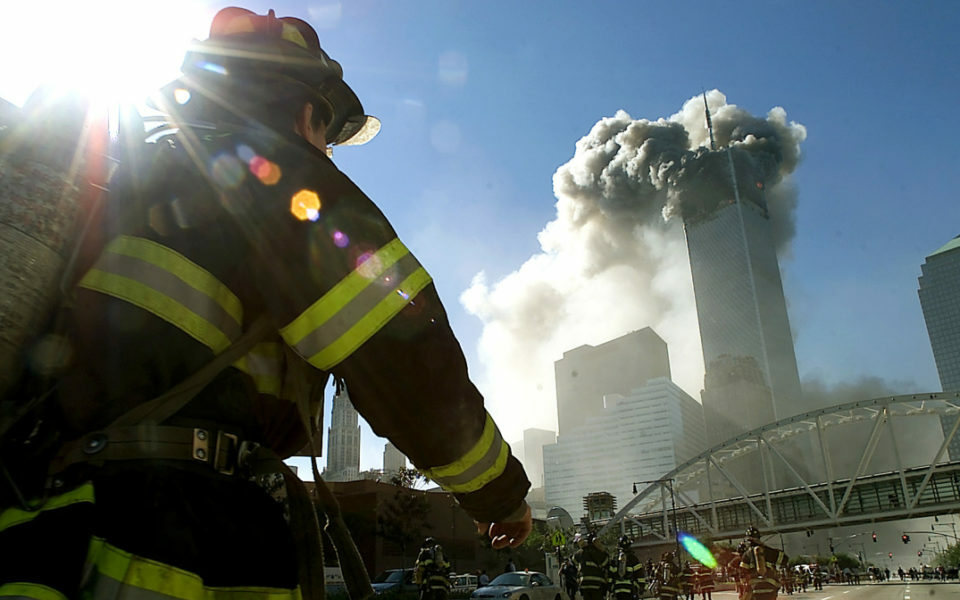 I’d been asked by my news desk back in Australia to grab the prime minister to get a comment on a decision by the Federal Court allowing the Norwegian freighter MV Tampa to land its human cargo of asylum seekers from Afghanistan in Australia. Howard was predictably indignant and said the government would consider challenging the court’s decision.

I didn’t know that Howard had just had a long conversation during his walk with his deputy, John Anderson, about the collapse of Australia’s second airline at the time, Ansett.

The other bit of information neither of us had any inkling of was that, as we were speaking, 19 terrorists affiliated with the shadowy al-Qaeda group were boarding four domestic flights – two from Boston, one from Newark, New Jersey, and the other from Washington, Dulles airport. They had deadly intent.

Howard returned to his room and after getting prepared for the day was being briefed on a news conference with his senior press secretary Tony O’Leary, who told his boss about reports a plane had hit the World Trade Centre in New York. They were surprised and wondered what it was all about.

I’d returned to my room, filed a few paragraphs for my newspaper and was getting ready for the day. I had the TV audio piped into the bathroom and heard news of the first plane hitting the Trade Centre.

A wide-eyed pause in my mundane chores, fed by a question on the news about whether it was a light plane, was followed by genuine shock as I walked back into the main part of my hotel room.

I looked at the TV, just as the second plane hit the Twin Towers. That’s no light plane, I said to myself, immediately thinking someone was inflicting terrible carnage on the United States.

Even though we found out about the collapse of Ansett, it dropped quickly on the list of things to even think about. The travelling media and the prime ministerial entourage were not that much more informed when we gathered in a room in the Willard Hotel – known in the US capital as the residence of presidents – and listened to Howard repeat his admonition of the Australian federal court.

I was sitting in the middle of the room next to ABC television political editor Jim Middleton when a Channel Nine camera operator, Mark Jessop, leaned in between us and whispered, “They’ve hit the Pentagon”.

Middleton and I exchanged startled looks. Howard took a question on the event we all still considered an intriguing couple of planes crashing in New York, saying little. As we left the room we opened the curtains behind where Howard had been standing and could see, across the Potomac River, rising black smoke from the dominant outline of the Pentagon.

A day like no other was in full swing.

We were ushered frantically into the basement ballroom of the Willard, unaware of what the hotel security knew – that the plane which departed Newark, New Jersey, was headed for central Washington, probably the White House, which was a few minutes’ walk from where we were.

History now tells us the brave souls on United Airlines Flight 93 tackled the terrorists on the flight deck and the plane crashed in a Pennsylvanian field, killing everyone. It’s a memory none of us in the Willard care to recall.

From the ballroom we scurried on foot to the Australian Embassy on Scott Circle in Washington’s northwest quadrant – going against the flow of people trying to get out of the centre of the city. There we waited for Howard to deliver considered, somber remarks. The prime minister said the attack was an act of war – making him the first world leader to raise the assault to this level.

The next day we went to the Australian ambassador’s residence where Howard made some remarks before hopping aboard Vice-President Dick Chaney’s official jet to fly to Hawaii for the first leg of a journey home – a trip during which the ANZUS treaty was invoked for the first (and still only) time. We were at war with an enemy not fully defined.

We stayed at war one way or another for almost 20 years with our last ground troops leaving at the end of June this year. Even so, it was not a war ever really declared over.

We joined the NATO troops in the defeat of the Taliban and helped chase al-Qaeda into the protected northwestern Pashtun towns of Pakistan, where the US Navy Seals took out Osama bin Laden a decade later. Meanwhile, we stayed on in a kind of hand-holding exercise for the rickety governments in Kabul.

In The Atlantic magazine this month, Garrett M. Graff, charts the failures of consecutive US administrations, saying the innocence lost between the first and second jets hitting the Twin Towers caused an overreach manifest in such shocking misadventures as the Guantánamo Bay maximum security facility, the horrific Abu Ghraib “prison”, extraordinary rendition to black sites and the whole exercise of “enhanced interrogation”.

Graff’s grim conclusion is the 17 minute gap between the first plane hitting the World Trade Centre and the second, more apparently serious explosion, was telling and stands as the first step in what’s been a sadly wrong-footed journey.

“The crash of that second plane at 9.03am, live on millions of television sets across the country, had revealed a gap in Americans’ understanding of our world, a gap into which anything and everything—caution and paranoia, liberal internationalism and vengeful militarism, a mission to democratise the Middle East and an ever more pointless campaign amid a military stalemate—might be poured in the name of shared national purpose,” write Graff.

“The depth of our leaders’ panic and the amorphousness of our enemy led to a long succession of tragic choices.”

It is a tragedy Australia was there, every step of the way and we have learned nothing from the experience.

Dennis Atkins is a former National Affairs Editor for Brisbane’s Courier-Mail and was travelling as part of the national press gallery with Prime Minister John Howard when the attacks took place.

This article first appeared in InQueensland.