FLORHAM PARK, N.J. — Zach Wilson straddled a line of red pads and faced quarterbacks coach Rob Calabrese, awaiting instruction on which way to shuffle his feet. Diagonally, about seven yards away on either side of the field, someone was waiting to catch a pass.

The drill is meant to have your brain and body processing on different levels and is a version of a workout utilized by some of the NFL’s elite quarterbacks. Your feet are shuffling. Your head and your eyes are taking in the instructions (move left, move right) and the relationship between those two needs to coincide at a split second when you are told which direction to throw. While no drill is perfect, it simulates the idea that, in the NFL, nothing is going to look perfectly, your feet won’t always be set and all synapses must fire regardless at the first glimpse of pretty good. Wilson can, like most quarterbacks now, finish a throw with the now standard no-look flourish, beelining a pass over his left shoulder while keeping his eyes toward the receiver on the right-hand side.

A few moments before his first OTA workout, Wilson’s coach, Robert Saleh, had admiringly called him “thick” before laughing at his word choice. He said that Wilson is in the right headspace. That he sounds like an NFL quarterback. That he acts like an NFL quarterback. That he hangs out with people conducive to making him a better NFL quarterback. Much has been made about the second-year quarterback’s offseason training regimen, which has him looking more like an NFL quarterback and less like a brand ambassador for Hollister. Understanding full well that this is a process (Saleh noted a few minutes earlier that Year 2 into Year 3 is when we often see the growth in a player), what the Jets have for now are these little moments. These drills. Padless, seven-on-seven football to gauge the status of a player who will be largely, but not singularly, responsible for buoying the team’s targeted rebuilding process.

A year ago, looking back on his first OTA practice as a rookie, Wilson had shown the moments that made him the No. 2 pick in the 2021 draft. He can float out of the pocket and let loose a one-legged, sidearm-looking circus pass that lands beautifully in the arms of his wide receiver. You’ll remember the one to Keelan Cole in the Jets’ win over the Titans. But if you were to place an optometrist’s patch over your eye, obscuring all the numbers, and ask who was the high pick in the draft a few weeks before, the answer would have clearly been backup Mike White. In the moments when Wilson wasn’t asked to be spectacular, he was behind his backup in terms of hitting the short- and medium-range routes with consistent, leading accuracy. On a quick slant, the ball might have forced a receiver to turn backward and reach away from his momentum. Neither quarterback had much experience with the current set of wide receivers, but White was more efficient when the final step of the assigned drop back hit the turf, and the ball immediately discharged in the location it was supposed to.

Now, though, Wilson appears to have closed that gap. His first throw in a seven-on-seven drill fired the moment his back foot touched the ground on the third step of a three-step drop. The ball drilled Corey Davis right in the chest, just enough ahead of him that he could run without adjusting his stride. Still existing are those plays when Wilson will hit the fifth step in his drop, double pump-fake, slide out of the pocket and loft a ball to running back Michael Carter for a 30-ish yard gain. Wilson, to at least one untrained eye, seems to be getting into his drops faster. His footwork looks a little smoother and more economical.

It is not all perfect. Wilson uncorked a loftless fastball to a running back trying to execute a wheel route, which typically requires more touch. There were a handful of balls that landed behind wide receivers, though not nearly as frequently as this time in 2021 (again, we stress, this may be the first time the quarterback was even meeting the person, so take this comparison with a massive grain of salt).

But if the opening drill is at all a metaphor for this process, the goal is to make the most of pretty good, which Wilson seems to have accomplished this offseason. His opportunities to be the kind of mobile, game-breaking quarterback we fawned over during the predraft process will exist, especially with an improved running game and an increased number of clean boot-action reps. His ability to be immediate and process will win New York more games.

Toward the end of the drill, it seemed the Jets’ quarterbacks coach was forcing Wilson to react more and more quickly. Where one quarterback may have had several beats between a directional change, Wilson had to shuffle left, then right immediately, back left, then deliver the football.

Baked into Saleh’s approach has been the player-friendly idea that this was the kind of undertaking that couldn’t be microwaved. Indeed, Saleh and general manager Joe Douglas had so much stabilization to create. Before their arrival, the Jets under Mike Maccagnan were crafted a bit like a beach house on stilts, susceptible to toppling under a moderate wave. So if this counts as a Wilson hype piece—that he seems incrementally more accurate and efficient—so be it. By design, we are not going to hear any clamoring statements or proclamations. We are going to have to look at the thing under a microscope. Right now, what we see looks better than the year before. 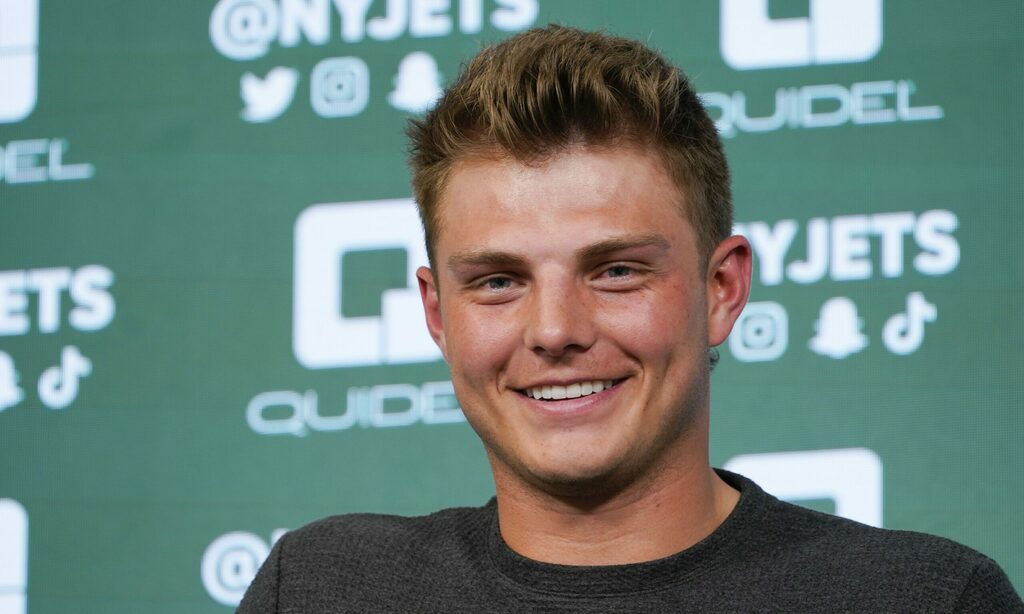 Sounds like Garrett Wilson is making a good first impression with his new quarterback in New York. #GoBucks