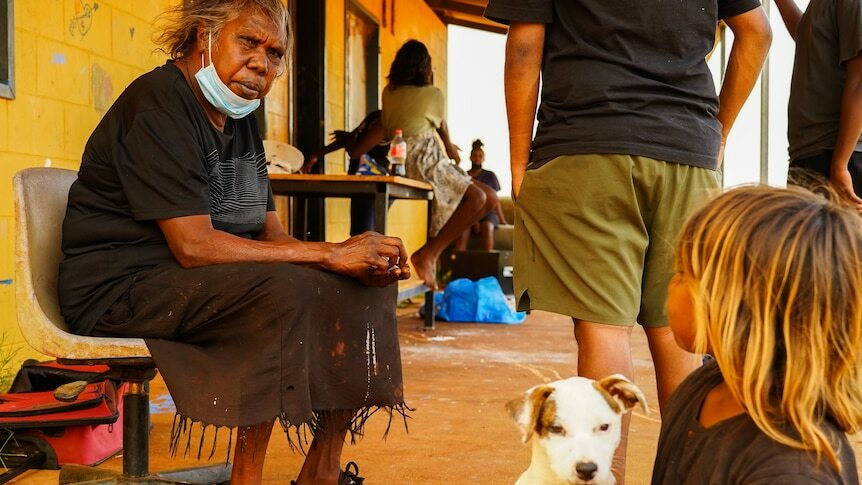 Leaders in Yuendumu say they are angry and frustrated at what they have called a slow response from the NT government following the spread of coronavirus to the Central Australian community.

Yuendumu, situated about 300 kilometres north-west of Alice Springs, and nearby Yuelamu, were placed under a five day lockout on Monday after three cases were identified in the communities on January 7.

The Central Australian community has one of the lowest vaccination rates in the Territory.

Forty-one per cent of the community is fully vaccinated and 65 per cent has received at least one dose.

The Northern Territory's Chief Health Officer, Hugh Heggie, has warned that without a significant change in those statistics, the outbreak could result in "loss of life".

On January 8, three positive cases and one close contact were transferred to the Todd Facility in Alice Springs.

On January 10, eight positive cases were transferred to the Howard Springs quarantine facility.

On January 11, eight positive cases and eight close contacts were transferred to the Centre for National Resilience.

Warlpiri elder Wendy Nungarrayi Brown said the community was "scared" and "worried" it had taken the government several days to seriously address the outbreak.

"They should have acted straight away, not waited for a few days," she said.

The ABC understands that six houses, including one severely overcrowded home, are in isolation.

Dr Heggie said the approach being taken in Yuendumu relied heavily on testing and on people isolating at home.

This strategy, he said, would now be the government's response to coronavirus in communities as Omicron begins to spread through the Territory.

But it marks a significant departure from the government's approach in the communities of Binjari, Lajamanu and Ali Curung, which saw the immediate introduction of tough restrictions and large influxes of health and police personnel.

This change in attitude has concerned leaders like Ms Brown, who said there was serious concern the government acted too slowly and without enough force to address the virus's arrival.

A two-person task force entered the 800-person community over the weekend and a team of six began work on Monday to test and vaccinate residents.

The outbreak comes at a time when NT Health is facing serious staffing shortages and the NT's hospital system is under strain from growing numbers of COVID patients.

On Tuesday Nicole Manison expressed disappointment that only 11 vaccines had been administered in Yuendumu since the start of the outbreak, but on-the-ground response teams were reportedly at capacity attending to the outbreak.

The carer of eight kids, Valerie Martin usually lives in Alice Springs and works as an interpreter.

Ms Martin, who is fully vaccinated, said community interest in the vaccine was "growing" but staffing issues at the clinic had hampered the availability of the vaccine in recent weeks.

In the week before Yuendumu recorded its first case she tried to have two of her grandchildren vaccinated but was unable to because of staffing issues.

She said she was "scared" and wanted to do "the right thing".

"I knew [COVID] was coming, that's why I needed my grandkids to have a jab," she said.

Ms Martin said misinformation and ongoing fear of the vaccine meant people were reluctant and she had become weary of engaging with people on the topic.

"You can't go walking up to people who aren't sure about getting a jab, it creates conflict," she said.

"I don't want to create conflict."

Yuendumu and Yuelmu are due to exit lockout on Friday, but Chief Minister Michael Gunner has suggested the measure could be extended if the vaccine rate remained low and case numbers continued to grow.