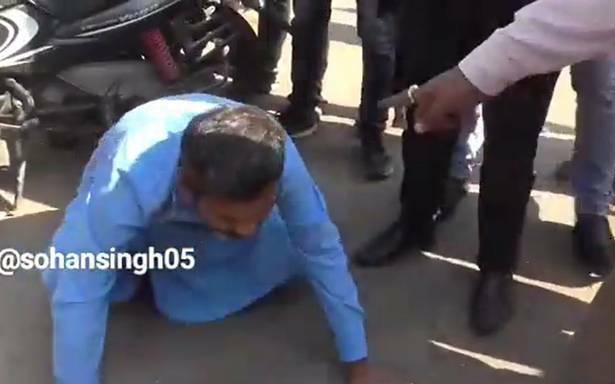 A youth was thrashed, forced to lick his spit and chant ‘Jai Sri Ram’ on Friday, allegedly by a group of BJP workers and leaders in Dhanbad, Jharkhand. Chief Minister Hemant Soren expressed concern over the incident and asked district officials to probe the incident and take strict action against the guilty.

In a video, which has gone viral on social media, the youth, said to be belonging to a minority community, is seen beaten up, doing sit-ups and forced to lick his spit and chant ‘Jai Sri Ram’ and ‘BJP zindabad’, allegedly by a group of BJP leaders and workers, who were on a dharna at Gandhi Chowk, near the Combined Building in Dhanbad town, protesting against the security lapses during Prime Minister Narendra Modi’s visit to Punjab on Wednesday.

The youth, passing through the spot, allegedly used some unparliamentary words against Mr. Modi and State BJP chief Dipak Prakash. He was caught and thrashed. Local people alleged that the police remained mute spectators. Later, the youth ran away from the spot.

Mr. Soren tweeted, “@dc_dhanbad kindly probe the incident and while taking stern action against guilty, inform about it. There is no place of such animosity in Jharkhand where people live in peace and harmony.”

State Congress and other party leaders too condemned the incident and demanded a probe “so that perpetrators will be identified and stern action could be taken against them”.