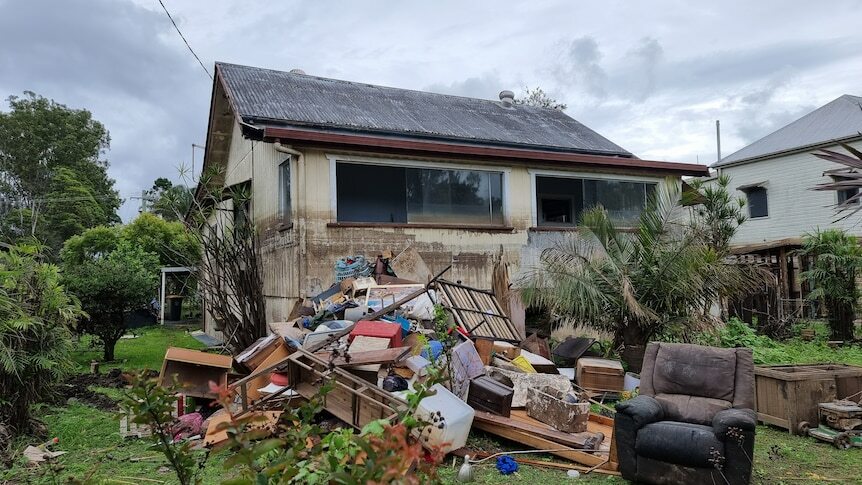 Bruce Oehlman enjoyed taking the helm of busy workboats on Sydney Harbour in the 1960s. When he retired to northern…

Young farmers bounce back after floods with help of neighbours, friends and customers

Farming on a flood plain comes with risks, but that doesn't make it any easier to bounce back when disaster strikes.

What does help is when the people who buy the farmers' produce pitch in to get things cleaned up.

"It's an amazing feeling for us," said Micah Oberon, who runs a small plot farm in Oxley in south-east Queensland alongside fellow grower Matt Bakker.

The young farming duo were right on the frontline when the so-called "rain bomb" struck at the end of summer, dumping hundreds of millimetres of rain across an already drenched south-east Queensland catchment.

"That's pretty much up to the near the top of our greenhouses."

Timing is everything, and this flood hit just as the season was taking off.

"We had finished planting out both greenhouses," Mr Oberon said.

Despite scrambling to save what they could, when roads become rivers only so much can be spared.

"I live just around the corner," Mr Oberon said.

"By the time I got here at three on the Sunday morning, I could see the farm was flooded and I could no longer get out of this little alcove down here.

"So essentially, I was flooded in with the farm."

"And I live over the other side," Mr Bakker said.

"We just started grabbing things that we could, seedling trays and a few of the tools that were hanging in the greenhouse.

"We tried to open the shipping container, where our more valuable tools were kept, but unfortunately, our combination lock was underwater, so we couldn't open it because of the muddy waters."

The pair estimate they lost about $40,000 worth of seedlings, crops and equipment.

"It really was strange."

But before long, neighbours, friends and others who were also "flooded in", in that same little pocket, turned up looking to help.

"And everyone was just here, people were bringing us lunch and coffee. There was even a big dinner party up the street after the flood had receded, so it was a really inspiring, heart-warming feeling.

"One of our neighbours brought down a big firefighter pump," Mr Bakker said.

"The amount of work he was able to do with that, just to wash everything down and get the mud off all the greenhouses – that was just amazing.

"I don't think we would be where we are now without that kind of support."

From physical work to financial aid, support has been offered in many forms.

"We launched the GoFundMe campaign [and] achieved our goal within a few days for the money we needed to replace a lot of the equipment we lost," Mr Oberon said.

Some of the best chefs from across Brisbane also pitched in, joining forces for a special flood relief fundraising dinner.

Adam Wolfers, the executive chef at Gerard's Bistro in Brisbane's Fortitude Valley, organised the event, which saw 10 chefs all together in one kitchen cooking up a feast.

The event raised $60,000 to be split among five flood-affected farms, including Neighbourhood.

"We serve that to the guests, and the relationships that we've created between all of these farmers are really important to keep, basically to keep us doing what we love."

The logistics of bringing together so many different chefs with different styles and cuisines all in one kitchen was quite incredible.

But Mr Wolfers said it was worth the hard work. He believes having small-plot farmers accessible locally is invaluable to fine dining.

"They're not big farms where they have thousands of kilos of pumpkins and things going out the door.

"They have small restaurants such as ourselves that buy direct, and you've got local communities that by direct off these farmers."

The roadside stall where Matt and Micah from Neighbourhood Farm sell their fresh produce has now reopened.

The pair say they're deeply grateful for the hard work that's gone into getting them back to business.

"It's really made us want to get back and grow more."

"It just makes us feel like we can keep going through anything," Mr Oberon agreed.

Watch this story on ABC TV's Landline at 12:30pm on Sunday, or on ABC iview.

Bruce Oehlman enjoyed taking the helm of busy workboats on Sydney Harbour in the 1960s. When he retired to northern…