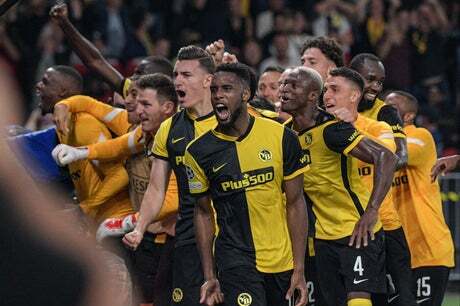 Manchester United‘s Champions League campaign got off to the worst possible start as Swiss side Young Boys came from a goal down to earn a famous 2-1 victory in their group stage opener.

Cristiano Ronaldo’s third goal in two games since his return to Old Trafford had given Ole Gunnar Solskjaer’s men an early lead but Aaron Wan-Bissaka was sent off before the break and Moumi Ngamaleu’s effort midway through the second half broke the resistance of the ten men.

A draw would still have a been a credible result in the circumstances, but Jesse Lingard’s backpass was picked off by Jordan Siebatcheu in the 95th minute to steal all three points.

Three-and-a-half months on from losing the Europa League final to Villarreal on penalties, the Red Devils were on course to return to continental action with a straightforward win after Ronaldo’s early opener.

The Portuguese’s 135th Champions League goal came as the returning forward equalled Iker Casillas’ appearance record in the competition, but the 36-year-old will want to forget his 177th match.

Wan-Bissaka’s 35th minute sending off for a rash challenge on Christopher Martins Pereira changed the dynamics of the game, with Ngamaleu levelling before Siebatcheu struck at the death.

Few could argue that the Swiss champions - managed by former Huddersfield boss David Wagner - did not deserve the result on a night when their performance was as impressive as United’s was poor.

Moumi Ngamaleu sent the Stadion Wankdorf wild when levelling and substitute Siebatcheu capitalised on a dreadful Lingard backpass to strike a stunning stoppage-time blow in the Group F opener.