‘You See People With Mushrooms Growing Out of Their Carpets’: Tenants With Mold in Their Homes Have Little Recourse 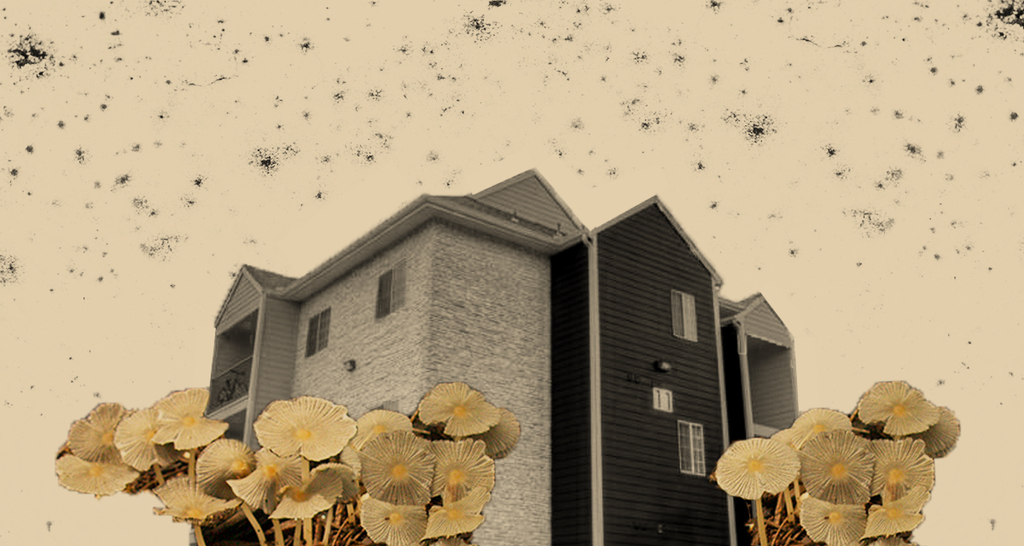 In August last year, shortly after Jack Delaplane and his two roommates moved into The Reserve at San Antonio, an apartment complex a couple blocks from the University of Texas San Antonio campus, their air conditioning stopped working. After the complex sent a repairperson to their unit, it worked briefly—and then broke again. Delaplane decided to check and see what was going on in the utility closet himself. That’s when he found the mold.

“Our air filter was broken and laying inside the water of our overflowing drip pan,” Delaplane said. “Half of it was dry and laying up against a live wire. The other half was molding in the water, and the water was full of mold.” The moldy pan was right under the vent that sucks the air up into the AC system; what Delaplane and his two roommates, Nina Mayers and Sammy Nieto, thought was dust collecting in their air vents were made up partly of mold spores easily breathed in, causing chronic headaches, bouts of fatigue, and coughing fits.

“We had COVID-like symptoms,” Mayers said. “And it was very strange to us because we really weren’t going anywhere or doing anything outside of the house.” As with COVID-19, mold can cause worse symptoms in those who are immunocompromised, as Delaplane was while he was undergoing cancer treatment.

“I didn’t really realize how much anxiety and stress was dedicated to living in that apartment at the time,” Delaplane said.

Incidences of mold in Texas homes exploded after the mid-February storm, which burst pipes and allowed moisture to seep into buildings’ foundations at a rapid rate, causing health issues for some and inciting protests across the state. But mold was a problem long before the storm—and with increasingly volatile weather conditions brought on by climate change as well as lax state regulations, housing advocates expect the problem to grow.

“You see people with mushrooms growing out of their carpets,” said Mincho Jacob, the communications coordinator for Building and Strengthening Tenant Action (BASTA), an Austin-based tenant advocacy group. Jacob, along with a number of housing advocates, have seen an uptick in reported mold cases in cities across Texas after the mid-February storm that killed hundreds and left thousands without water and power.

There are currently no federal regulations or standards for airborne concentrations of mold indoors. Climate change, and the severe storms and flooding it brings, will only exacerbate the problem.

Since the early 2000s, studies have shown that mold is dangerous for human health. Reactions to exposure include everything from allergies to lung hemorrhaging, depending on the kind and quantity of mold. Mold affects people in different ways depending on their body’s autoimmune response, said Elizabeth Matsui, a professor at the University of Texas at Austin’s Dell Medical School. “You can see allergic manifestations like if you were allergic to a cat, [or] it can also cause a sort of inflammatory disease of the lungs,” which could be confused with asthma, or, as of last year, COVID-19.

Because people’s symptoms when exposed vary so widely, it’s difficult for state lawmakers to regulate mold. In 1995, when nine children in Cleveland died of bleeding lungs after prolonged exposure to stachybotrys, commonly known as black mold, the Centers for Disease Control and Prevention (CDC) noted a possible link between stachybotrys and the children’s symptoms, but added that the cause of death had not been sufficiently proven. Most other molds seem to be in a similar category: dangerous in large amounts, but to an unknown degree. This uncertainty makes it difficult to hold negligent landlords liable in court for mold exposure.

The CDC recommends removing stachybotrys or any other type of mold due to health risks, and “all molds should be treated the same with respect to potential health risks and removal,” but makes no mention of what responsibility a landlord has to do so.

In 2002, the last time the issue was studied, the U.S. International Trade Commission reported that nationally, insurers paid more than $3 billion in mold-related lawsuits, more than double the previous year’s total; Texas led the charge, topping $85 million. The Texas Legislature responded in 2003 not by requiring landlords to address mold, but instead by regulating licensing for who can assess mold. That same year, insurance companies in Texas largely moved away from covering mold and mold removal in their plans, as they had prior, opting instead to cover water leaks. The legislature has not taken action on mold since then, although during the mid-February storm, Governor Abbott waived the requirement to have mold assessed before remediation projects could be conducted.

To get a landlord to fix a mold problem, tenants have three options, said Sandy Rollins, executive director of the Texas Tenants Union: terminate the lease and sue, stay and sue, or repair and deduct the price of repairs from your rent.

“Tenants can report the issue with local code enforcement, but that doesn’t mean the issue will be dealt with,” said Zoe Middleton, the southeast Texas co-director for Texas Housers, an affordable housing nonprofit. “As with lots of habitability issues in Texas, the onus is on the renter to initiate a repair, and all roads lead to the courts, which not all tenants can afford.”

Jacob, of BASTA, said that mold isn’t like a broken light that can be easily fixed. “It’s usually an indicator of a lot of potential other issues like leaky pipes or drainage issues on the property.” Property owners can be hesitant to deal with those more expensive structural issues.

Delaplane and his roommates submitted work orders to fix their AC unit 11 times, but it kept breaking. According to work order documents, the property identified mold in the apartment last September but the roommates said they were unaware of the mold until May. Every time they thought the problem was finally fixed, the AC would break again, and the layer of mold on their drip pan remained.

“There were a couple instances when we had to go back a couple times to address an AC issue,” said Joe Goodwin, Senior VP of Asset Living, the management company that owns The Reserve. But, he said, records indicated the issue had been resolved. Goodwin added that the roommates declined The Reserve’s offer to move to a different unit, but did not specify when or how that offer was made. Delaplane said he did not recall ever receiving an offer for a new apartment.

Goodwin also said The Reserve sent a mold assessor to check out the apartment, but they were turned away. Nina’s mother recommended the roommates hire a third-party mold assessor, who found “moderate levels of cladosporium,” one of the most common allergy-causing molds, with small fungal spores that can easily reach the lower respiratory tract, as well as slightly elevated levels of another strain of mold.

At the end of the school year, Delaplane and his roommates filed a notice to vacate, three months before their lease was up. Included in the notice to vacate was a doctor’s note, which identified their symptoms as due to “consistent exposure to mold” and ordered the roommates to “avoid the apartment as much as possible while looking for alternate housing.” (Goodwin said their assessor, who returned after the tenants moved out, found no evidence of mold in the apartment.) Soon after, The Reserve sent Delaplane and his roommates a bill for more than $3,800, citing damages, cleaning charges, and accelerated rent for the months left on the lease.

The roommates have moved out and moved back in with family, but soon their semester will start again. Delaplane, who moved in with Nieto’s family in Edinburg, has opted for remote learning to stay close to family support. Mayers, too, opted to remain at home in Houston. They also contacted a lawyer, who is negotiating a reduction in the fee on their behalf. Mayers paid their portion of the bill, which came out to around $2,500, but at this point, Delaplane hasn’t decided whether he wants to pay. “I am furious that I am paying anything at all,” he said.